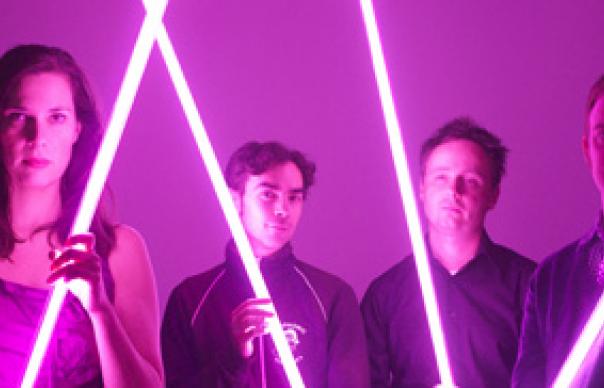 It’s really not so farfetched. In fact, the last of those turns out to be the first track on Chemical Chords – depending on your patience and cataloguing system, the ninth, tenth or eleventh Stereolab album since 1991, and their first, if you don’t count the Fab Four Suture singles compilation, since 2004’s Margerine Eclipse. And the band’s working methods increasingly seem to be aspiring to some of that abstract, experimental, aleatory playfulness – involving, according to Tim Gane, “messing around with with a series of about 70 tiny drum loops on top of improvised chord sequences using piano and vibraphone… then later slowing the tracks down or speeding them up”.

Is this just arid audio research? An expression of creative exhaustion? Or simply the band going about their long-term laboratory business: diligently remixing and matching, plotting and dreaming, rubbing disparate genres up against each other, searching for that elusive spark or chemical reaction?

Some were surprised that Margerine Eclipse, recorded in the wake of long-time ‘Labcoat Mary Hansen’s death, proved to be such a sunny, defiantly upbeat affair. Similarly you might have reasonably expected the global credit implosion, soaring fuel inflation and food riots – the bearing out, after all of their prophecy on “Ping Pong” of a “huger slump, bigger war, shallower recovery” – to have sharpened the band’s Marxist wit. But instead Chemical Chords journeys yet further into a kind of blithe heart of daftness, an imaginary 1966 midway between the Monkees‘ “Pleasant Valley Sunday” the Left Banke’s “Pretty Ballerina” and Terry Riley‘s “In C”, breezy with Herb Alpert brass, dappled with Motown bass.

If there’s little likely to fry your mind or even tickle your fancy as much as, say, Dots And Loops or Emperor Tomato Ketchup, it’s still a hugely enjoyable record, from the playgroup doowop of “Neon Beanbag”, through the soundtracky atmospheres of the title track to the rinkydink piano singalong of “Daisy Click Clack”. The heart of the record, though, might be “Silver Sands”, an expression of wonder at the “delicate, intricate” natural magic of gardening, where “sunlight and water transform into life”. You might see this as in some way self-referential, an analogue of the project of Stereolab themselves, humbly tending their own prim garden of strange blooms and exotic flora. And, indeed, it chimes with the album title – chemical chords suggesting the recombinatorial weave of DNA, as it spirals into new and evermore wonderful manifestations.

But you could take the analogy further: isn’t that fertility and novelty dependent on fresh encounters, new cultural chromosomes cross-pollinating? The worry for Stereolab, in their increasing refinement and cultivation, must be a certain amount of inbreeding. You wonder if their music might not be as vivid, comic, daft, tasty, elegant and iconically pop-art as the banana – but maybe also ultimately as genetically sterile. With a new album of the less pop material from these same sessions due later this year, let’s hope for some new mutations.

U:It’s been four years since the last album – was there any sense of creative block? Are you more focused on your own projects these days?

LS: Well, we’ve been working on other things – I worked on my own project, Monade, and Tim worked on the soundtrack to the the film La Vie d’Artiste. And we released the singles that were collected on Fab Four Suture. But I think Tim was not feeling inspired by the idea of a new album. The very idea of the album seems to be fading out – there are different ways to release music now…

Chemical Chords seems a very serene, sunny album. What with the state of the world in 2008, did you ever feel like making an angrier album?

I don’t think you need to be angry to make political music. You can be calmly critical. I don’t think just blaring out your rage is necessarily very effective…

You’ve recently moved back to London from France – were you forced to flee the new Sarkozy regime?

Well, really I just missed London – it is much more dynamic there. Everything in France is so slow. If you want to start up a small business, like a small record label, you have to get permission from your local mayor! In London it is all much simpler.