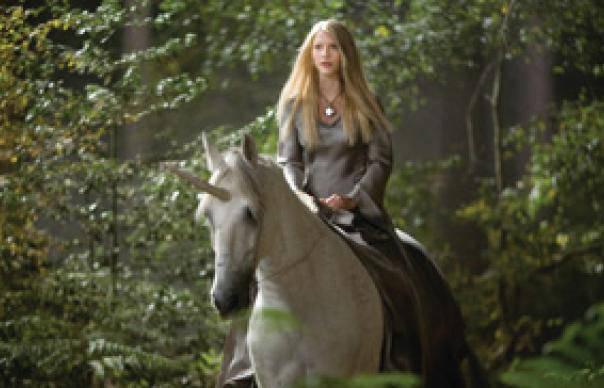 In what appears to be, on paper at least, the year’s oddest movie grouping, this adaptation of comic author Neil Gaiman‘s very British fantasy epic is directed by Guy Ritchie‘s former producer and stars Robert De Niro as a gay pirate. As it is, Vaughn was originally scheduled to direct X Men 3, so presumably has some handle on a universe beyond East London lags beating the shit out of each other with lead piping.

De Niro, we know, does comedy well, and with a supporting cast including Ricky Gervais, David Walliams and ex-Green Wingers, there’s the makings here of a clever, witty romp along the lines of The Princess Bride.

We’re in the sleepy village of Wall that borders the land of Fairie. After seeing a falling star land just on the other side of the magical wall, local lad Tristran Thorne (Charlie Cox) vows to find it and bring it back and present it to his paramour Victoria (Sienna Miller) as a love token. Once in Fairie, Tristran finds the star, now in human form as Yvaine (Claire Danes). She’s being hunted by witch Lamia (Michelle Pfeiffer), who wants to use Yvaine’s life to extend her own, and the seven heirs to the throne of Stormhold, whose number rapidly diminishes as they off each other as they story progresses.

A steady stream of star cameos buoy the narrative along, and Gaiman’s inventive, playful source material is well served by the script writers (who include Mrs Jonathan Ross). But, crucially, Cox and Daines lack requisite chemistry and while much around them dazzles, they conspicuously fail to shine.