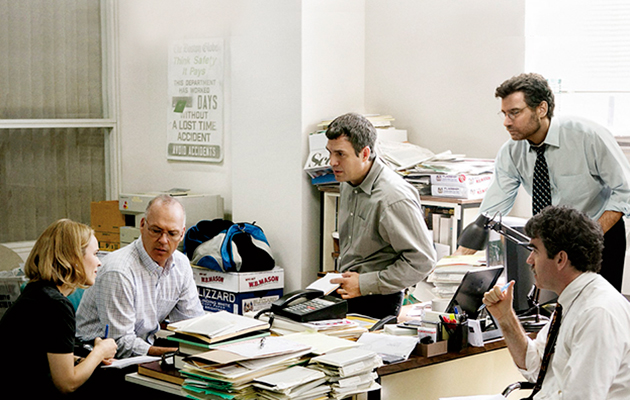 In 2002, the Boston Globe ran a story exposing the systemic cover up of sexual abuse by Catholic priests in Massachusetts. Tom McCarthy’s strong procedural drama follows the work done by the paper’s Spotlight team as they uncover evidence stretching back decades and involving not just high ranking members of the clergy but public officials and city elders.

The work is carried out in a pleasingly old-school style. Clippings are sifted, libraries visited, archives searched, court records unearthed. In one sequence, our reporters are seen diligently combing line-by-line through Massachusetts Church directories with rulers and pencils. A film in which an ensemble cast of characters work to defeat a seemingly unstoppable enemy, Spotlight is a bit like an anti-superhero movie, where spreadsheets win the day instead of laser vision.

The obvious antecedent is All The President’s Men, but Spotlight is a dense and complex as an Aaron Sorkin screenplay. It involves a lot of people, talking in rooms. It also has the downbeat hue and measured pace of David Fincher’s Zodiac – another great procedural, although that team pursued a different kind of real-life bogeyman. (Robert Redford and Cate Blanchett star in another film about journalism; Truth, about a 2004 newsroom scandal).

The core of Spotlight is a series of unfussy performances from an on-point cast, led by Michael Keaton as the Spotlight head, Walter Robinson. His crew consists of Mike Rendez (Mark Ruffalo), Sacha Pfeiffer (Rachel McAdams) and Matty Carroll (Brian d’arcy James), who live in subterranean office space in the depths of the Globe offices. Their outsider status within the Globe is not played up; but it is a critical part of the story.

The Spotlight investigation is initiated by the Globe’s incoming editor, Marty Baron (Liev Schreiber) – an “unmarried man of the Jewish faith who hates baseball”, who isn’t deep inside Boston society. “If it takes a village to raise a child, it takes a village to abuse one,” says lawyer Mitch Garabedian (Stanley Tucci), identifying the code of silence within the Catholic community that has effectively buried these incidents of abuse for years and allowed the Church to transfer paedophile priests to other parishes or retire them. Arguably, it takes an outsider like Baron to instigate the investigation.