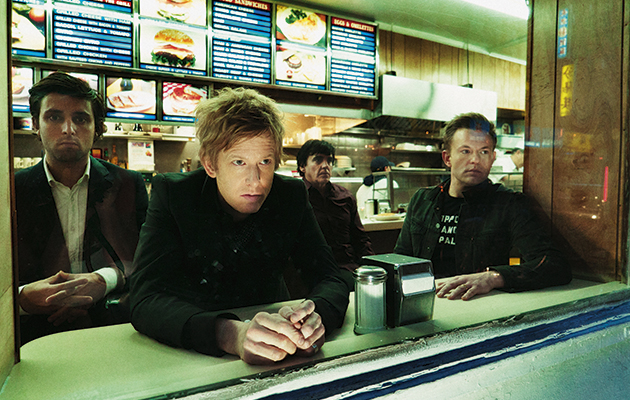 Spoon’s distinct identity, a deft balance of concision, swagger, vulnerability and taut grooves, coalesced on 2001’s Girls Can Tell. The following year, Austin-based co-founders Britt Daniel and Jim Eno perfected their recipe with the following year’s minimalist masterpiece Kill The Moonlight, an album that still sounds radical a decade and a half later.

After four more beguiling and nervy albums, Daniel and Eno have made another sonic shift as bold and striking as the Girls-Kill segue, but in this case the transition is expansive rather than reductive. 2014’s They Want My Soul – satisfying if unsurprising – was the first to feature co-producer Dave Fridmann, yet it’s on Hot Thoughts that his influence is felt strongest, with Spoon’s standard instrumentation manipulated in a manner analogous to David Bowie, Brian Eno and Tony Visconti’s audacious treatments on Low – right down to the eerily atmospheric sax-and-drums dialogue “Us”, the album’s “Warszawa”-like instrumental coda.

This new approach is emphatically apparent from the start of the opening title track: a drum machine groove gallops out of an electronic drone, while Daniel’s guitar stabs and pounded celeste get a compressed treatment from Fridmann, locking the licks into the overall sonic architecture. The quantized feel continues through the subdued bridge, coloured by Daniel’s moody piano, whereupon Eno’s drums suddenly appear with the concussive impact of mortar shells and drive the track to its heated conclusion. The surprises continue: playful syncopation on “Do I Have To Talk You Into It” morphs into a brontosaurus stomp, while “Whisperi’lllistentohearit”’s one-note sequencer pattern is sent into overdrive by Eno’s Bonham-muscled eruption at the two-minute mark.

On Hot Thoughts, the dance of sinew and space that has always defined Spoon’s identity has been absorbed into a sonic monolith that moves forward aggressively and relentlessly. And yet the band’s instrumental signifiers are still present, embedded in the throbbing soundscapes – like the shakers that subliminally propel the six-minute, mostly instrumental groove fest “Pink Up”, and the King-Kong-scale handclaps and Thunderclap Newman piano chords that push the groove on “Can I Sit Next To You”.

“I Ain’t The One”, originally conceived as a loner’s parting gesture in the manner of Johnny Cash, has been reimagined by Daniel and Fischel as an understated, achingly regretful ballad of lost chances. Captured in a reverberant room, with overdubbed choirboy harmonies set off by a startlingly assertive rhythmic bridge, the song – centered on what may be Daniel’s most unguarded vocal performance – is as beautiful as anything in the Spoon lexicon.

Daniel’s propulsive piano, another signature move, sets the defiant tone of “Tear It Down”, which in light of current events comes off like a grand, up-to-the-minute protest anthem: “Let them build a wall/I don’t care I’m gonna tear it down/It’s just bricks and ill intentions/They don’t stand a chance/I’ll tear it down”. “Shotgun” doubles down on this confrontational tone behind Daniel’s staccato guitar volleys and wry yet sobering allusions: “You and me dreamin’ ’bout full medical and dental”.

Unlike most of their contemporaries, Daniel and Eno have never wavered in their focus, never lost the plot, never allowed ego to distort their disciplined direction, resulting in one of the most consistent outputs of any 21st-century band. Hot Thoughts finds Spoon at the peak of their considerable powers, their ninth album effortlessly unfolding and gradually revealing its mysteries as they cement their place in the firmament of undeniably great rock bands.

Q&A
Britt Daniel
How much was Bowie on your mind as you were making this record?
I figured this out before he died; I do think Bowie is, to put it bluntly, the guy I’ve ripped off the most [laughs]. I’d hear a song like “Modern Love”, where he starts off right at the top of his range [sings the first line], and I’d want to figure out what that formula was. But I really feel like Bowie has given me more ideas than anyone else. Probably second to Bowie would be Prince, which is a sad coincidence.

After They Want My Soul, which struck me as a summing up of your approach, the new album feels like it’s setting off into uncharted territory.
I think it sounds different from our other records – if it was ground we’d covered before, we tried to stay away from it. What Dave [Fridmann] is interested in doing is fucking things up – making sounds that are abrasive, confrontational or surprising. He always says, “Subtlety is our enemy”. To me, the best way to get somewhere is to have a little bit of intention with a song, but then you throw some things at it that you never could’ve expected. When that happens, the beautiful stuff comes. So I feel really good about where we are now. But it also feels like a very dark time.
INTERVIEW: BUD SCOPPA