This is London: Shane Meadows lightens up and heads down South 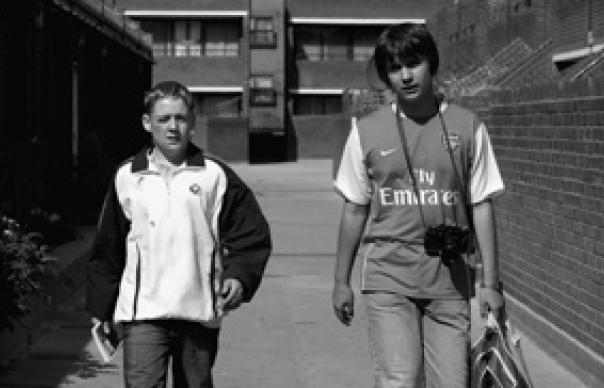 
Nottingham’s Shane Meadows has become something of a master of the cheap and cheerful. Not always that cheerful, though: This Is England, his last film and his best yet, was a chillingly on-the-ball evocation of far-right 80s skinhead culture. But in Somers Town, Meadows is unashamedly cheap, definitely cheerful, and – at 75 minutes – bracingly brief. This is his first film to be set in London – specifically, the area around the back of St Pancras Station. The film was financed by Eurostar, although the result is anything but an ad for the upmarket salad bars of the new London-Paris terminal.

Thomas Turgoose, the young lead in This Is England, plays Tommo, a teenager from a care home, venturing down to London in the hope of better things. Tommo quickly falls foul of some local kids, but things look up when he falls in with Marek (Piotr Jagiello), a shy Polish boy whose father is a construction worker at the station. Tommo and Marek hit it off after initial wariness, united by their adoration of a French cafe waitress (Elisa Lasowski). Their courtship of her is strictly a teenage boy’s fairy-tale fantasy, as Paul Fraser’s script is quick to recognise, and the rest of the film settles into a more realistic view of life in a mundane but bustling part of the metropolis.

Meadows’s films often have a baggy, happenstance feel, as if he simply enjoys hanging around with characters he likes, and Somers Town fits that pattern. There’s much of Meadows’s usual tomfoolery: Tommo loses his clothes and ends up wearing a ridiculous set of ill-fitting fancy dress. Some priceless comic content comes from neighborhood chancer Graham (Perry Benson, laying on the ‘how’s your father’ dopiness), who cheerfully exploits the lads as hired help on his fly-by-night ventures.
Somers Town slightly comes across like Ken Loach lite, but it’s an enjoyable, honest and emotionally generous film, strongly evocative of how it feels to wile away your afternoons as an outsider in a city that’s indifferent to your troubles.