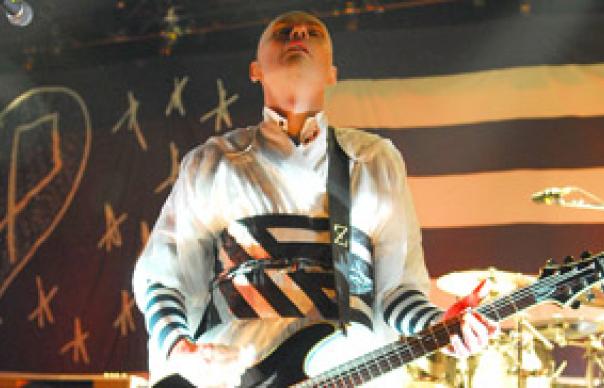 It would be difficult to greet ‘Zeitgeist’ without a degree of apprehension. After all, since The Smashing Pumpkins collapsed in an ugly tangle of infighting and highly publicized drug addictions in 2000, Billy Corgan hasn’t exactly done much to contradict the widely-held suspicion that his grip on both talent and sanity were slipping.

There was the lackluster solo album that precisely nobody bought, those cantankerous former-bandmate-slandering blog posts, a book of inscrutably depressing poetry, the utterly forgettable Zwan. So when Corgan announced the reformation of the Pumpkins—furthermore, a “reunion” that only involved himself and drummer Jimmy Chamberlain, who together also comprised Zwan—there was reason to worry.

The fact, then, that Zeitgeist comprehensively fails to suck is an achievement in and of itself. It is transparently a record with something to prove, and Corgan has approached it with passionate determination: From the tumultuous first surge of opener “Doomsday Clock,” Zeitgeist comes on with a vicious energy, a jugular-grabbing intensity. And while Corgan never strays from the signature goth-metal-shoegaze sound that the Pumpkins first trumpeted on their 1991 debut ‘Gish’, and which carried them through their heyday as giants of mid-90s alt-rock, he also rarely lapses into lazy rehash.

On “Shades of Black,” guitars sound as if they’ve been immersed in corrosive acid; “That’s the Way” displays that same knack for warm, gliding melody that made past hits like “Tonight, Tonight” so indelible; “Come On (Let’s Go)” is an incandescent wash of swirling feedback buoyed by incisive, 70s arena-rock-sized riffs.

Of course, the new Smashing Pumpkins won’t look like the old Smashing Pumpkins—icy blonde bassist D’arcy Wretzky, replaced by Ginger Reyes, and guitarist James Iha, whose shoes are filled by Jeff Schroeder, will be missed. But ultimately, the band was always Corgan—an obsessive perfectionist, he often insisted on playing all of the instruments except drums himself during the recording of their early albums; even the first-ever Smashing Pumpkins gig was just the singer with a drum machine—so perhaps it doesn’t matter that much who’s in or who’s out. Zeitgeist is irrefutable evidence that Corgan’s vividly haunting and singularly menacing songwriting faculties are indeed still intact. It’s good to have him back.