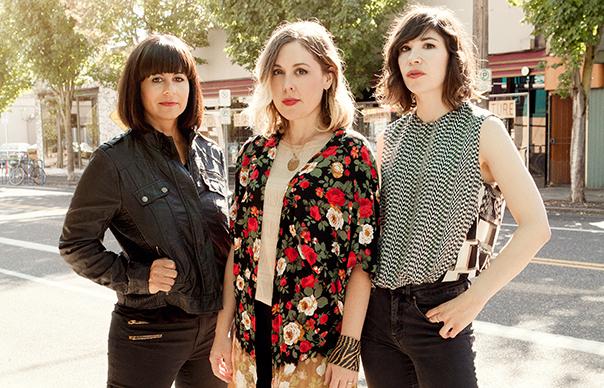 After forming in 1994, Sleater-Kinney spent most of the ‘90s trying to ensure their ascendant profile remained connected to their origins. “We are coming from somewhere, we’re not just an isolated entity without a context or a background,” said Carrie Brownstein, one of their two singers and guitarists. Her counterpart Corin Tucker could pinpoint where exactly: Valentine’s Day 1991, when, aged 18, she saw Bikini Kill at Olympia, WA’s North Shore Surf Club. “It was the first time I’d seen feminism translated into an emotional language,” she told Greil Marcus. “…You had the feeling they had started the week before and that you can do it too – stand up and speak in the town square, even if you have to create the town square yourself.”

But by the time Sleater-Kinney recorded what their final album, 2005’s The Woods, they were trying to smash their town square, bristling against complacency and the limiting descriptors that trailed them: ‘feminist’, ‘punk’, ‘riot grrrl’, ‘political’. Having made all but one of their previous records with John Goodmanson in Seattle, the Pacific Northwest trio (Quasi drummer Janet Weiss joined in 1997) ventured cross-country to Dave Fridmann’s New York State studio and said they wanted to halve their audience. “We’re sick of people feeling they know who we are and what we’re capable of,” Brownstein told Eddie Vedder. “I remember thinking … I’d really love to make some of our fans angry.”

It was an energy they had tapped into while supporting Pearl Jam at the beginning of the Iraq war. Sleater-Kinney’s own gigs were an echo chamber for anti-Bush rhetoric. Here they met 10,000 booing patriots whose indifference spurred them on to make an earth-razing record: a flood of stinging, Zep-indebted sludge populated by desperate characters clinging to hope in a crumbling world order. Their first for Sub Pop after leaving Kill Rock Stars, The Woods was acclaimed but divisive, letting them exit as a band apart when they declared a hiatus in 2006.

Eight years later, this box collects Sleater-Kinney’s seven LPs, remastered by Greg Calbi (amplifying the bottom end in the absence of a bassist) and accompanied by a photo book. No liner notes, b-sides, rarities, demos. Sleater-Kinney were constantly asked to defend the legitimacy of their voice by critics and scene forbears who thought they’d sold out. This reissue does not ask for permission, eschewing context to let their catalogue stand as its own defiant rock monolith. As it should: while they’ve no agreed-upon classic, rarely has a band released this many records without faltering.

Sleater-Kinney’s success (selling 100,000 copies per record by their conclusion) was often interpreted as transcending the limitations of being “women in rock”. In reality, their triumphant existence was a direct result of their lived experience: on 1995’s savage-but-hooky self-titled debut, Tucker and Brownstein turned society’s desire to marginalise women into a threat (“I’ll show you how it feels to be dead”). By Call The Doctor the following year, they were celebrating their own presence, singing “I Wanna Be Your Joey Ramone” – pop-punk-meets-‘60s girlband-isms that maligned and celebrated rock cliché while laying bare their ambition.

Sleater-Kinney were chops-proud rockists, which is how they convinced traditionalists (from Jack White to Greil Marcus, who declared them America’s best rock band) that they were getting rock on their own terms. But, as Tucker explained, “You can love rock’n’roll and be enraged by it.” 1997’s Dig Me Out celebrated the genre’s transformative potential while the more downbeat The Hot Rock (produced by Roger Moutenot) castigated the major label industry that wanted to mould them. After Woodstock ’99, with its gang-rapes and resurgence of main stage meat-heads, Sleater-Kinney swore off rock’s chauvinist pantomime with 2000’s All Hands On The Bad One. Ashamed of the peers’ reluctance to criticize Bush after 9/11, 2002’s One Beat documented new mother Tucker’s terror at almost losing her premature baby while “the world [exploded] in flames”.

Sleater-Kinney’s story is of a band losing faith in humankind, god, country, even music, but making it their fight. By succeeding on their own terms – never ceding control or compromising, and going out on a high – they showed up rock’s self-serving rulebook as a sham, chiselling three new faces on its Mount Rushmore.
Laura Snapes