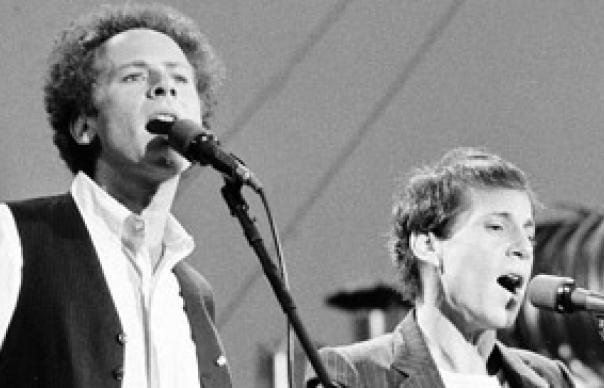 A dumpy little poet with worried eyebrows. A tall tenor with Harpo Marx hair and a Tefal forehead. If they auditioned for American Idol, the pair would be sent packing before they’d got past “Hello dark–” in “The Sound Of Silence”. And what an unfortunate judges’ error that would be, because Simon & Garfunkel – the bookish Odd Couple of ’60s pop – sold 50 million albums by applying an age-old practice (harmony in song) to mankind’s ultimate yearning (harmony in life). As Simon’s bobble-capped, moustachioed ‘image’ on the cover of Greatest Hits confirmed, sometimes what you look like isn’t the point.

Simon & Garfunkel sang of subtle, probing themes; without screaming or shouting, their heroic hits (“Homeward Bound”, “Mrs. Robinson”, “Bridge Over Troubled Water”) helped America through divisive times, much as another little-‘n’-large ampersand duo, Laurel & Hardy, had done in the Depression. That, at any rate, is the kinder of the two critical views.

There’s a less charitable opinion that says Simon & Garfunkel represent cosy, easily accessible emotion – a sort of go-to poignancy – which is why they’re found in the record collections of people who read Booker Prize-shortlisted novels and live alone. I might as well confess that as a student in the early ’80s, I got into the habit of putting on Sounds Of Silence whenever I moved house, ‘christening’ the empty room or bedsit with sweet voices and folk-rock reassurance. Not being American, and not having recollection of the ’60s, there was no earthly reason why songs like “Leaves That Are Green” and “Kathy’s Song” should have touched me. They just did. I suppose, whether you’re the world’s greatest superpower or a teenager in an unfamiliar post-code, the melancholy elegance of Paul Simon’s writing (“My mind’s distracted and diffused, my thoughts are many miles away…”) seems to be two steps ahead of your situation. And from what we know, Simon could write a line that travelled directly to the heart and solar plexus (“Michigan seems like a dream to me now”, “Counting the cars on the New Jersey Turnpike”, “Where have you gone, Joe DiMaggio?”) – lines that could make an entire population catch its breath. (When DiMaggio, the 1940s baseball legend, succumbed to cancer in 1999, the headlines all but read: “Simon & Garfunkel man dies.”)

Remastered in 2001, the S&G catalogue is never going to struggle for listeners. If anything, fear of an imminent world recession might send people sprinting to the last remaining record shops to stock up on ‘you’re-not-alone’ classics like Bookends and Bridge Over Troubled Water. Meanwhile, for those who like doing their panic-buying early, The Collection – a 5”x5” black cardboard box (with slide-action lid), containing CDs of all five studio albums (in repro LP sleeves), plus a DVD of The Concert In Central Park (1981) – is an attractive, tasteful addition to any shelf, mantelpiece and/or glove compartment.

The least-known S&G work is their 1964 debut, Wednesday Morning 3 A.M. An acoustic folk album, made by childhood friends who’d been singing together since the mid-’50s, it was a commercial flop, only getting attention once producer Tom Wilson’s ‘electrified’ version of “The Sound Of Silence” had stunned S&G by hitting No. 1 in America. Wednesday Morning 3 A.M. is a decent record within its genre, but its earnest war allegories and love-thy-fellow-man supplications are a bit like two Baptist ministers coming into your primary school with acoustic guitars and being groovy.

Much more impressive are Sounds Of Silence and Parsley, Sage, Rosemary And Thyme (both 1966), where the haunting presence of English folk – Simon had toured there in ’64 and ’65 – is rhapsodically perfect for the singers’ close, feathery harmonies. (According to Roy Halee, who engineered or co-produced their work, one reason their voices sounded so symbiotic was because they sang together into the same microphone.) Of the two ’66 albums, Parsley, Sage… has an especially delicate mood, not to mention a title track that spelled ‘come hither’ for Crosby, Stills & Nash, and Tower Bridge will perish before its beauty does.

Bookends (1968) – often called a concept album – and Bridge Over Troubled Water (1970) are more overtly ‘produced’, and as a result can come across as portentous where their predecessors are quiet as libraries. Bookends raises eyebrows even now with its synthesisers and sound collages, but the voluptuous directions taken by Simon’s lyrics (in “America”, particularly) can leave you gasping. Listen to “Old Friends”: it’s one thing to observe that two people on a park bench look like bookends. It’s another to notice the “round toes” of their “high shoes”.

Dominated by its legendary title track (whose softly-stroked line “Sail on, silver girl” is the most spine-tingling moment in the S&G canon), Bridge Over Troubled Water dances here and there to the rhythms of Simon’s future solo career (“Cecilia”; the old Peruvian tune “El Condor Pasa”). He and Garfunkel soon opted for a painful divorce, saddening millions. But do not fret: they can be instantly reconciled by watching the Central Park DVD, which is more than can be said, alas, for most marriages.