Political satire hits its target - but lacks humour and pace. 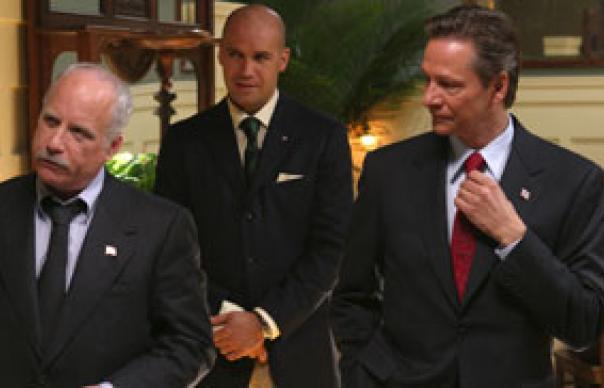 Scattergun rants abound in American movies (ask Michael Moore), but pensive political satire is less common. John Sayles is supremely astute at picking at flabby, corrupt systems. Silver City is an intelligent, thought-through, novelistic piece of work, blessed by a brilliant Dubya send-up from Chris Cooper. If it’s a little slow and preachy, and short on actual humour (for a satire), its messages ring loud and clear.

We’re introduced to the inarticulate Senator Pilger (Cooper). He has a ferocious campaign manager (Richard Dreyfuss) and a murky, influential backer (Kris Kristofferson). Also a knack for shooting himself in the foot. “Those were the good old days,” he tells an assembly. “All you needed was a good strong rope and a tree to hang it from.”

Sayles then switches focus. Danny Huston’s jaded detective takes centre stage, probing Pilger’s background. He vies with journalist Maria Bello (his ex), lobbyist Billy Zane (her new beau), and Pilger’s scandal-magnet pothead sister, Daryl Hannah. Tim Roth and Thora Birch are website radicals. Everyone Huston meets gives a speech, states a viewpoint.
Because of this bring-on-the-next-opinion structure, the film never gathers dramatic momentum or achieves the noir intensity of the thrillers it admires – Chinatown, The Maltese Falcon. There’s no doubting its fine intent though: as one cipher says, “Someone has to plant a seed”.