Michael Moore takes a scalpel to the US healthcare system 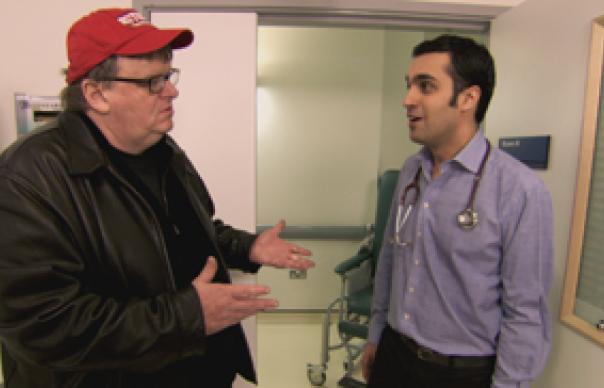 More than any filmmaker of his generation, Michael Moore polarises people. Right-wingers loathe him, left-wingers hate his methods, but he is unquestionably a grand master at turning dry political subjects into multilpex entertainment. Besides, anyone who irritates so many self-appointed guardians of truth and decency must be doing something right.
Bombastic and manipulative, Moore is certainly an easy target, drawing heavy fire from all sides since his blockbuster success with Bowling For Columbine and Fahrenheit 9/11. Sicko goes a step further, earning the director threats of a possible jail term from the US Treasury Department for breaching a Cuban trade embargo.

Ironically, this shocking but grimly funny exposé of America’s privatised healthcare system is the polemical filmmaker’s least politically contentious doc to date. It argues for something only a diabolical moron could oppose: better medical cover for all, with patients prioritised over profit. Wrong-footing critics who might be expecting a bleeding-heart underclass story, Moore makes a smart tactical decision to concentrate on the 200-million-plus US citizens with health insurance, not the 47 million without it.

Sicko is a film about the middle-class, Middle-American mainstream. All of them, it argues, getting a shoddy deal. By turns amusing, angry, reductive and mischievous, Sicko uncovers many real-life horror stories of appalling mistreatment and ruthless commercial logic. Jamming his satirical thermometer into some dark places, Moore apportions political blame liberally, from Nixon to Hillary Clinton. By contrast, he examines socialised medicine in France, Canada and Britain, hammering home the shameful truth that America’s medical system lags pitifully far behind most industrialised nations.

Including Cuba, where Moore takes a party of 9/11 rescue workers to receive free treatment denied them at home. Angering US Treasury officials, this sequence is just the sort of grand-standing stunt that rankles Moore’s detractors, right and left. Even so, Moore’s populist bombast serves the same commendable purpose as ever, turning a worthy social issue into serious-minded blockbuster entertainment.