Martin Scorsese finds his way in the unfamiliar territory of gothic noir – set in a mental asylum... 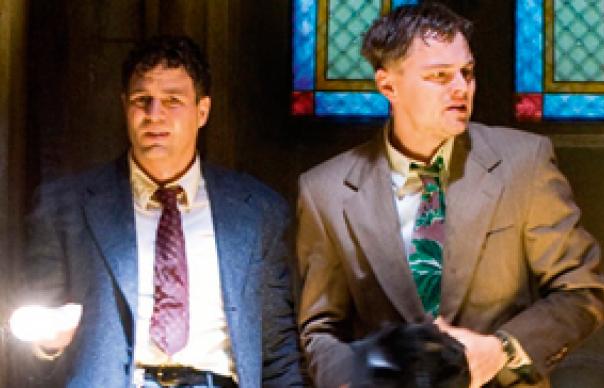 You could be forgiven for thinking these might be the rather fruity ingredients from a vintage horror movie instead of the latest Martin Scorsese film.

Certainly, Shutter Island resembles nothing less than a lurid, gothic noir – in another decade you might reasonably expect to see Boris Karloff pop up as Shutter Island’s baleful German psychotherapist Dr Naehring. So what’s prompted Scorsese – on the back of his long-deserved Oscar win for The Departed/ – to make an unlikely detour into territory arguably more appropriate to RKO Studios circa 1940s?

In some respects, Shutter Island finds Scorsese in a familiar – and potentially not entirely welcome – position in his career.

In the past, following highpoints like Taxi Driver, Raging Bull, GoodFellas and Casino, he’s chosen to move out of his feted comfort zone with, one can politely say, mixed results. That’s New York, New York, King Of Comedy, Cape Fear and Kundun, in case you need reminding. Indeed, Shutter Island’s closest parallel might well be Cape Fear, a similarly playful exercise in shocks and jolts.

But if Scorsese could be accused of indulging himself on Cape Fear – all that overblown schlock and De Niro’s Henry Rollins-style tats – Shutter Island is a commendably restrained picture by comparison. That’s not to say it’s not without moments where Scorsese clearly has tremendous fun deploying jarring Bernard Herrmann-style strings, vertiginous camera angles and wildly distorted shadows. But these tropes are Scorsese’s fond riffs on German Expressionist cinema – where similar visual motifs gave shape to characters perilous psychological states. Entirely appropriate, then, for a film set in a mental hospital.

In fact, it could well be serendipitous that Scorsese was busy working on the narration for a documentary on Val Lewton – producer of classic 1940s horrors like Cat People, The Seventh Victim and madhouse shocker Bedlam – when he was sent the script for Shutter Island. Lewton is certainly a critical reference here – as is Preminger’s identity-swap drama Laura, Frederick Wiseman’s documentary, Titicut Follies and Samuel Fuller’s asylum expose, Shock Corridor.

Adapted from a novel by Mystic River and Wire writer Dennis Lehane, Shutter Island is set in 1954, as Leonardo DiCaprio’s US Marshal Teddy Daniels, and his new partner Chuck Aule (Mark Ruffalo), investigate the disappearance of inmate Rachel Solondo from the island’s Ashecliffe Hospital for the Criminally Insane. Solondo, we learn, was incarcerated after drowning her three children.

She escaped from a locked cell, through barred windows, leaving no trace of her whereabouts.

The only clue, perhaps, to her disappearance is a note Teddy finds under a loose floorboard in her cell: “The law of 4 who is 67”. But Teddy’s investigation is hampered on several fronts – a hurricane threatens to decimate the island, he suffers frequent nightmares about the atrocities he witnessed as a GI during the liberation of Dachau and, in elaborate fantasy sequences, he receives dire warnings from his dead wife.

Most obstructive, Teddy believes, to the immediate practicalities of solving the case are the Ashecliffe’s doctors and administrative staff, led by Ben Kingsley’s Dr Cawley.

Cawley practises “a moral fusion between law and order and clinical care,” remarkably forward thinking for the 1950s. But Teddy comes to mistrust Cawley – and Max Von Sydow’s affable but ominous Dr Naehring – who he sees as uncooperative, or at worst, deliberately obscuring some deeper secret operating at the heart of the Ashecliffe.

In fact, as the film progresses and Teddy appears to uncover darker and more insidious truths about the facility, he finds himself increasingly mistrustful of anyone’s motives, even his partner. And, as he begins to suspect he is being dosed with psychotropic drugs, his paranoia spills overboard.

This is DiCaprio’s fourth outing with Scorsese; at a comparable point in their careers, Scorsese and his other favoured leading man, Robert De Niro/, were on Raging Bull. Although it does both actors a disservice to compare their roles for the director, I’m reminded of a quote from Scorsese about Two Oscars Bob: “He isn’t afraid to be unpleasant, to be mean, to be a person that nobody likes.”

It would be hard to make the same claim for DiCaprio, of course.

But he has a vulnerability that’s worked well for Scorsese across their previous collaborations and gave extra texture to the vengeful Amsterdam Vallon, arrogant Howard Hughes and beleaguered Billy Costigan. If you couldn’t imagine DiCaprio playing Jake LaMotta, equally I can’t see De Niro as Teddy Daniels. The impact of Teddy’s gradual unravelling is predicated around our sympathy for him; De Niro never did sympathetic.

Scorsese is absorbed here with tricksy notions of identity (at one point, Fight Club’s David Fincher was due to direct), and the cast around DiCaprio ensure that there are certain ambiguities to the way their characters play out. Ruffalo – a great supporting actor – brings subtle shifts to Chuck as his role develops. Kingsley and Von Sydow do their slightly creepy European actorly thing, and there’s a series of splendid cameos from Patricia Clarkson, Emily Mortimer, James Earle Haley and, memorably, Silence Of The Lambs‘ Buffalo Bill, Ted Levine, as Ashecliffe’s warden.

“Men like you are my speciality,” he purrs at Teddy with all the predatory confidence of a lion at feeding time eyeing up a light snack. “Men of violence.”

But, crucially, what Scorsese understands about horror movies is that the right location is everything. After all, what’s Dracula without his castle, or The Evil Dead without a rickety old log cabin stuck out in the middle of the woods? So the Ashecliffe itself becomes a character in its own right. An imposing red brick facility, it resembles a Victorian boarding school, overlooked by an ominous grey structure – an old Civil War fort, we learn, home to Ward C, where they “take only the most dangerous, damaged patients”.

Sure enough, once we get inside Ward C, it’s a maze of poorly lit tunnels, rusting metal staircases and dark corridors. You might wonder why there’s no flaming torches jutting out of walls – but that might be a step too far, even for Scorsese.