Shut Up And Sing 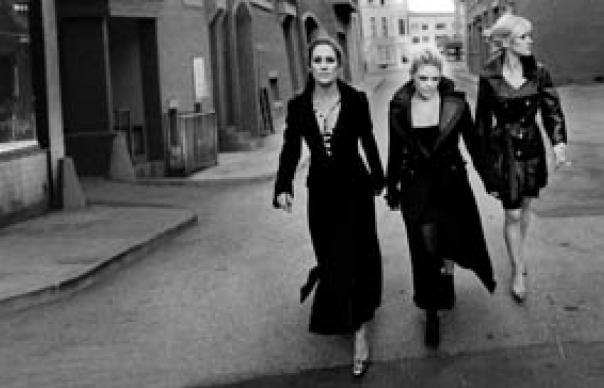 In March 2003 – ten days before the invasion of Iraq – the Dixie Chicks’ lead singer Natalie Maines tells her British fans she’s ashamed of President Bush. Right wing commentators jump on the remark, and America’s best-selling girl group is dismayed as the backlash threatens their career.

Talk about a free Country: within a week of Natalie Maines informing the good folks at the Shepherd’s Bush Empire how she was “ashamed that the President of the United States is from Texas”, the Dixie Chicks had been branded anti-American “Dixie Twits”, CD sales plummeted, and they were quietly dropped from radio play-lists.
Although documentary filmmaker Barbara Kopple and co-director Cecilia Peck didn’t sign on until the aftermath of the affair, the group handily supplied eye-of-the-storm footage from the Shepherd’s Bush concert and the crisis management meetings that followed.

This is riveting stuff, and several things become clear. For a start, while Maines was evidently sincere in what she said, she was also playing to the crowd; first and foremost, this was a flippant statement, not a declaration of independence. The band – and British manager Simon Renshaw – didn’t anticipate long-term repercussions, and when the shit hits the fan, carefully worded apologies are forthcoming. By then, though, the rightwing Free Republic campaign is in full flow, and these improbable dissidents have been hung out to dry.

Ironically, only two months earlier they were playing the Star-Spangled Banner at the Superbowl and setting off on the Top of the World tour.
Kopple – best known for the Woody Allen doc Wild Man Blues – shies away from interviews and narration in favour of ‘fly-on-the-wall’ observation. In theory this technique allows us to glean our own meanings, but an opening scene with the Chicks laughing off internet hate-mail while they play with Emily’s and Martie’s babies leaves no doubt where the filmmakers’ sympathies lie.

The up-close and personal approach serves the women well, and the trio emerges with a good deal of credit, not just for the united front they maintain through this trial by fire, but for defending the principle of freedom of speech even as they fear it might cost them their livelihood – and indeed, their lives.

Kopple cuts back and forth between 2003 and 2006, when they re-emerged with Taking The Long Way album, and this before-and-after shows how the feisty Maines in particular found her artistic voice in defiance of her critics. Hardly natural born protest singers, they are politicized by the extreme over-reaction of a constituency they assumed was their own. Heck, they even decide to tour without the safety net of a corporate sponsor – a decision that costs them when ticket sales prove disappointing throughout the States.

Admittedly the subjective focus only hints at what may be the most significant aspect of the story – the way media capitulated to and often exacerbated a censorious rightwing agenda – but this remains a remarkably candid account of a high-flying band going into freefall overnight – and dealing with it. If they’re still pariahs on Country radio, at least the Chicks have discovered greater musical freedom as a result. Too bad, as Natalie is bummed out to learn, even if they’re cool now, they’re still too old for MTV.