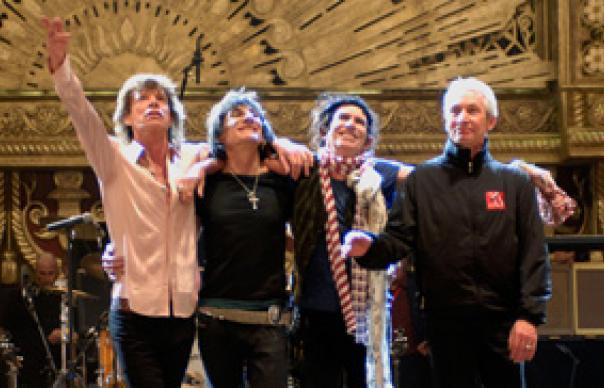 Mick Jagger’s first inclination, we now know, was to hire Martin Scorsese to film the Rolling Stones when they played Rio in February 2006. This would have provided spectacle, for sure – 2 million people on the Copacabana Beach, the largest crowd ever assembled for a rock concert, all that – and the music would no doubt have been great. But what, I’m sure, you’d remember most if Scorsese had taken his cameras to Brazil would have been the sheer size of the event.

This for Jagger, you suspect, would have been something like the point and says much, I think, about how he sees the Stones and how he expects them to be remembered. It’s as if he doesn’t in a way trust posterity and its shifty henchmen to properly honour the Stones simply for their music, as it might, more easily, for instance, honour Dylan or The Beatles. He has therefore contrived on behalf of the Stones to make sure that when, as far into the future as you can imagine, history looks back at the rock’n’roll landscape as we know it, they will loom larger than legend, the biggest band of all time, authors of the largest-grossing tours the world will ever know, vast juggernauts that have brought them before more people than will be reached again by anyone.

Good reason and Scorsese’s eventual persuasiveness eventually prevailed, I’m glad to say, and he filmed them finally at New York’s Beacon Theater, a venue that to them must have been the equivalent of playing a garden shed in a derelict allotment. What follows in Shine A Light speaks for itself as an eloquent articulation of their astonishingly enduring excellence – simply put, no one plays this shit better than them – but has also offered Scorsese, in these comparatively intimate surroundings, the opportunity to craft in unsparing detail an extraordinary portrait of the band and what they have become, which by the end seems something akin to grizzled heroism.

There will be inevitable comparisons with The Last Waltz. But that was about a band – The Band, in fact – who had decided to call it a day and hence had an elegiac feel, the group’s final performance interspersed with interviews in which the hardened road-warriors reflected sometimes ruefully on their past. There’s no element of that misty introspection here, no sense of a coming end, a winding down. The Stones’ power as a live band is undiminished by age, amazingly so, and Shine A Light consequently is a celebration of both their longevity and their irrepressible vitality, at which you can only sit and marvel and several times want to cheer, in every case loudly.

To get all this on film, Scorsese deployed something like 18 cameras, manned by some of Hollywood’s leading cinematographers, led by Director Of photography Robert Richardson – who has worked previously with Scorsese on Casino, Bringing Out The Dead and The Aviator and also done outstanding work with Oliver Stone on, among other films, Platoon, JFK and Natural Born Killers. His crew don’t miss anything – the detail of the film is often breathtaking. Scorsese and his editor David Tedeschi, with whom he collaborated on the Dylan documentary No Direction Home, cut away time and time again from the main action time to something that has caught the eye of his cameramen, which more often than not seems to involve Keith, and the little bits of business he forever gets up to. There’s one indelible image of him spitting out a fag, cigarette sparks flying in a series of slow motion frames like something you might have seen in Casino, whose mainly slouching presence is upstaged not a whit by Jagger’s cavorting athleticism.

The film is also very, very funny and in the opening scenes Scorsese has a lot of fun with Jagger’s fussing over the details of stage design, set lists, general organisation and where during the show the cameras will be and how they might get in the way of the band and the audience, about which he frets incessantly. Scorsese threatens to rather overplay the pantomime he has to go through to get the Beacon set list out of Jagger – “Can we know what they’re going to play?” the director at one point mugs histrionically. “It doesn’t have to be in order” – but his choice, with Jagger, of the archive footage is endlessly hilarious, mostly Mick and Keith being interviewed down the years, and a series of hapless hacks being treated with supercilious disdain by Jagger and by Richards with wicked mockery.

You’ll also laugh out loud at a meet-and-greet with Bill Clinton, Jagger observing the handshakes and backslapping with a cold eye and Keith buggering about (“I told him I was bushed,” he cackles). Funnier still is Keith’s solo spot in the concert, when he appears suddenly in a long black overcoat that makes him look like a deranged German general at the walls of far off Stalingrad. “Good to see you all,” he announces with a throaty chuckle, fag in hand, like a legend of vaudeville. “Good to see anyone, actually.” You almost expect Charlie to follow up with a drum roll and cymbal splash.

A comprehensive description of the film’s highlights would keep us here until the next issue or the one after – but mention should be made of the show-stealing appearance on a version of Muddy Waters’ “Champagne And Reefer” by Buddy Guy, which finds Keith stirring like a big cat after an afternoon in lolling sunshine, and prowling then inquisitively around the veteran bluesman, who Scorsese simultaneously captures in a long, loving close-up, before Keith, at the song’s end, unstraps his guitar and offers it to Buddy as a token of a genuinely touching awe-struck respect.

Shine A Light brilliantly captures the Stones in all their ecstatic rapture, bacchic and sublime, but equally effectively it’s a kind of hymn to the often fraught history that Jagger and Richards share – how their friendship has survived frequently seismic upheavals, everything they’ve been through, which is more than can easily be imagined, etched large in Scorsese’s relentless close-ups of their lined and crevassed features, with their music the undying bond between them, rock’n’roll as the sweetest amnesty. When they sing together, head to head, and embrace at the end of “Faraway Eyes”, you get a wholly moving glimpse of what they mean to each other and, of course, to us.