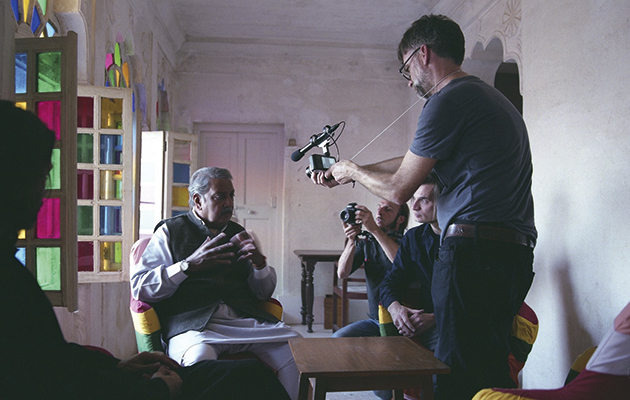 Paul Thomas Anderson is as close as 21st-century cinema gets to an auteur. The Californian director’s movies – which include 2012’s thinly veiled L Ron Hubbard biopic The Master and last year’s Thomas Pynchon adaptation Inherent Vice – are very much filmmaking with a capital ‘F’: rich of milieu, featuring plots as dense as literature, and talented actors pushed to the brink of their abilities. But 2015 has seen Anderson take a year off from movie making to explore some more musical pursuits. He has made a couple of music videos for Joanna Newsom, who herself appeared in Inherent Vice (Uncut’s Film Of The Year for 2015). And he has strengthened ties with another musical collaborator, Jonny Greenwood, the Radiohead guitarist and composer who has scored every Anderson film since 2007’s There Will Be Blood.

Anderson’s sole theatre release in 2015, then, is Junun, an hour-long documentary that follows Greenwood, singer-composer Shye Ben Tzur and Radiohead producer Nigel Godrich as they travel to the inland northern Indian state of Rajasthan to record with local Sufi Qawwali musicians. The facilitator here appears to have been Greenwood, who met Tzur a couple of years ago while travelling in the Negev desert in southern Israel. Tzur is Israeli by birth, but has spent much time in India studying the devotional music of the fragrant, mystical strain of Islam known as Sufism; his music, sung as it is in a mix of Hebrew, Urdu and Hindi, leapfrogs clear geographic and religious boundaries. Greenwood and Godrich’s presence complicates this already complex cultural mélange further. Anderson’s film captures a scene from the recording session, which took place in the 15th-century Mehrangarh fort in Jodhpur. Pigeons flap around in the rafters as Tzur and a group of Indian musicians, sat cross-legged, beat out a rhythm using handclaps and dholak hand drum. Then the camera pans round to reveal a familiar fringe – Greenwood hunched over his Apple Macbook, carefully tweaking an electronic rhythm until it falls into step.

Junun slots neatly into a lineage of musical artefacts capturing the raw activity of cultural exchange, from Buena Vista Social Club to Africa Express. But instead of playing up its audacious collisions – east meets west, Israel meets Islam – these 13 songs feel more about natural chemistry and mutual understanding than grand statements. Anderson’s film takes care not to explicitly name many of the players until the end credits, and similarly the recording avoids any sense of explicit leadership, feeling like the product of a democratic whole. Tzur sings and plays guitar and flute, while Greenwood flits between guitar, drum machine, laptop and Ondes Martenot. But the emphasis throughout is placed on the circling hand-drums, harmonium drones and vocal choruses that are the backbone to Qawwali song.

The results can be stirring. The title track, adapted by Tzur from a poem by the Sufi writer Hazrat Nawab Mohammad Khadim Hasan Shah Sahib about “the madness of love”, goes along at a fair clip, Greenwood weaving sputtering electronic beats around a quick, syncopated battery of hand percussion. Two female vocalists, Afshana Khan and Razia Sultan, take the lead on the stirring “Chala Vahi Des”, a song of pilgrimage by the 16th-century mystic Meera Bai. And “Julus” and “Junun Brass” show off the capabilities of a six-piece Indian brass band led by trumpeter Aamir Bhiyani.

Importantly, the size of the ensemble – 21 players in all – doesn’t stymie occasional softer moments. We get a measure of Tzur’s romantic, spiritual leanings on “Ahuvi”, a deeply sad, lovelorn piece sung in his native Hebrew, and on “Eloah”, a chanted vocal piece about the formlessness and omnipotence of God (“Each letter of the Torah carries his soul/My creator is a sound, his heartbeat is silence”, reads the translated script). Meanwhile, “Kalander” begins with a twinkly ambient section that appears to pair Tzur on flute and Greenwood on the Ondes Martenot, while “There Are Birds In The Echo Chamber” is a brief interlude that appears to capture precisely that, a reminder of the unconventional studio from which this recording sprung.

Often, these sorts of projects can appear rather impressed with themselves, a way of Western musicians applauding their cosmopolitan credentials. If anything, though, Junun feels almost too humble; it would perhaps be naïve to expect Greenwood to be cranking out a bit of “Creep” guitar, but his presence may be too fleeting for Radiohead disciples keen for a stop-gap before the next album. This is no critique of Junun itself, though, which stands as a fine entry point into the rich mystery of Sufi music, and a beautiful audiovisual document shot with a keen eye and a steady hand.

Q&A
Jonny Greenwood
How did Junun come together?
My wife introduced me to Shye’s music, and persuaded him (and me) that we could make a record together. The key moment was telling Shye that we could record anywhere at all. With Radiohead we were used to setting up studios in old, semi-abandoned houses. As long as there was at least one big room, we could make it work. Then, luckily, Shye met some Maharajahs at a polo ground – at some literary festival, I think – and the Maharajah of Jodphur offered his palace as a recording location. Aside from endless power cuts, it went really smoothly. We were using every last piece of equipment we had – we brought everything from the Radiohead studio. These limitations were good for us: Nigel and Sam constructed an echo chamber in a basement of the fort, so it felt like the whole building became part of the record.

How familiar were you with Sufi music before embarking on this project? What did you see your role as being, once the actual music began?
Totally ignorant. I knew that Shye was a committed believer in this mystic branch of Islam, but religious music generally is new to me, outside of classical things. My role was overseeing production – basically to sit in with the drummers and pretend we were accompanying James Brown and Miles Davis. What I didn’t want was an overly reverential ‘field’ recording of – terrible name – ‘world music’. We were making a record.
INTERVIEW: LOUIS PATTISON