Shabazz Palaces – Quazarz: Born On A Gangster Star/Quazarz vs The Jealous Machines 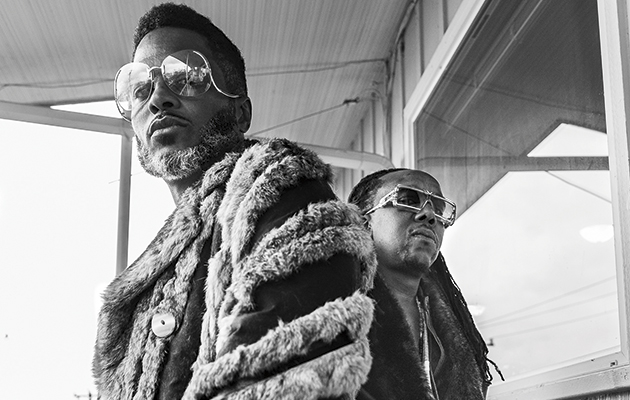 Forty years since its emergence from the New York projects, hip-hop remains an artform in a state of sonic, social and political flux. Few groups, though, appear as evolved as Shabazz Palaces. Resident in Seattle and signed to that town’s venerable independent label Sub Pop, the group – the duo of Palaceer Lazaro and Tendai Maraire – are a truly singular proposition.

Lazaro is just the latest pseudonym of Ishmael Butler, a rapper and musician with some three decades in the game. Back in the mid-’90s he was Butterfly of Grammy-winning rap trio Digable Planets. Butler’s current group share something of Digable’s blunted funk and intellectual curiosity, but Shabazz Palaces feel more like the product of a DMT trip than a dope haze. Butler has transformed himself into a sort of intergalactic beatnik, as likely to be found lounging in embroidered robes or posing with a pair of pythons than anything more familiarly hip-hop. The pair’s music, meanwhile, sounds like rap music viewed through a prism – a psychedelic reverie of glittering electronic textures and unconventional beats that’s sensual, expansive and disorientating.

Shabazz Palaces break their three-year silence since 2014’s Lese Majesty with not one but two albums, released simultaneously but otherwise distinct. Born On A Gangster Star and Vs The Jealous Machines both deal with the tale of Quazarz, an interstellar explorer sent to the “United States Of Amurderca” to chronicle what he finds. Shabazz Palaces’ blend of cosmic invention and Afro-American consciousness places them in an Afrofuturist lineage including Sun Ra, Funkadelic and The Rammellzee, the first wave NY rapper/graffiti artist who performed in the homemade armour of a space assassin. But there’s the sense that Butler embraces cosmic subject matter not just as a flight of fancy, but as a means of observing our age from a new perspective.

Shabazz Palaces have become a weirder proposition since their 2011 debut Black Up, but there are still glimpses of familiar hip-hop tropes in “Fine Ass Hairdresser” and “When Cats Claw”, preening boom-bap numbers loaded with surreal boasts and esoteric disses (“I’m Crazy Horse and you’re Custer/I’m flexing with the force, buster” goes the latter). But Maraire, the son of Zimbabwean mbira player Dumisani Maraire, drives the record with fluid, organic rhythms, while occasional guests push the envelope further: the abstract, funky “Since CAYA” reportedly came together while Butler was hanging with Thundercat and Herbie Hancock at Flying Lotus’ house.

Where it coalesces, …Gangster Star is a light, trippy confection, reinventing R&B with rippling electronics and slippery, Prince-like funk. “Eel Dreams” is a tale of underwater seduction wreathed in bubbly synths; “The Neurochem Mixalogue” imagines doo-wop sung by a malfunctioning Hal 3000; and there are nods to Kraftwerk in “That’s How City Life Goes” and “Moon Whip Quäz”, which flips the melody to “The Model” and uses it as the engine to a galaxy-roaming space opera. There is one moment of straightforward rap classicism in the shape of “Shine A Light”, which cruises in on rhapsodic strings sampled from Dee Dee Sharp’s ’60s soul hit “I Really Love You”.

Quazarz Vs The Jealous Machines differs from its sister album in a few key ways. Recorded in a beachside studio in Los Angeles with producer Sunny Levine, grandson of Quincy Jones, it will be released as a book with illustrations by Joshua Ray Stephens. The change of scenery lends a sweltering, sun-baked quality. Lyrically, meanwhile, the  concept – of discomfort with technology – comes a little more into focus here  than on …Gangster Star. “Gorgeous Sleeper Cell” paints social media as a control mechanism (“Watching all the currents enticing my mind/Gluttons for  distraction swiping all the time”) while “Self-Made Follownaire” finds Palaceer warning of “Illuminati bots trying to scratch my mind…”

Shabazz Palaces operate around the outer limits of hip-hop, but you get little sense here that Butler sees himself as an outsider. Rather, he’s here to get everyone to raise their game. Like interstellar guides, they’re always positioned a little further out than their peers, and these two records offer suggested routes to an infinity of possible futures.