The curious comic apprenticeship of Belushi, Aykroyd… and Chevy Chase 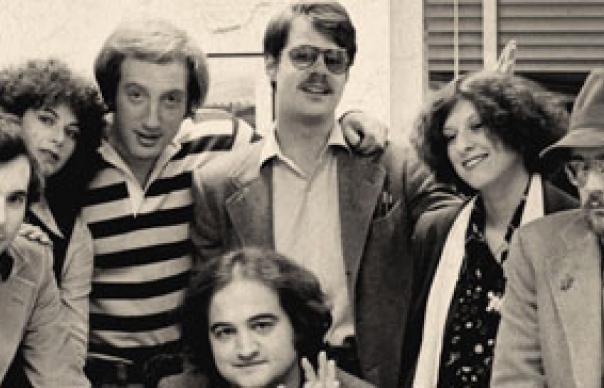 The old ones – as anyone who has ever tried to tell an old joke will know – are not always the best. This eight-disc box set collects the first 27 episodes of the influential NBC comedy show, first broadcast in 1975-6, when the show was still called NBC’s Saturday Night, old jokes are very much what it contains.

Of course, it contains a great deal more besides. Conceived by producer Lorne Michaels, SNL tried (and still tries) to break the comedy mould, not with Pythonesque silliness, or extremity, but with the ad-hoc nature of its format. Written, so legend has it, in overnight sessions in the week prior to transmission, and generally performed live, the show has an edginess built in: tottering between genius and disaster, this live tightrope walk is where the comic magic happens.

And it’s hard to deny the influence of the strategy. Stars to have passed through the show’s doors include comic giants like Eddie Murphy, Adam Sandler and Will Ferrell. It was here – having sketches rejected – that writer and Curb Your Enthusiasm star Larry David developed the idea for Seinfeld. In the 1980s, its impact was even felt in the UK, where the copycat Friday Night Live developed the careers of Harry Enfield and Paul Whitehouse, and brought us Ben Elton in a glittery suit.

What is equally hard to ignore, watching them today, is just how hit and miss these shows are. There are some surprisingly excellent musical guests: Billy Preston, Janis Ian, the superbly deadpan Leon Redbone, Kris Kristofferson and Rita Coolidge. There are some undeniably bizarre moments – Elliott Gould introducing the programme by singing showtunes, say. Actual jokes, however, are pretty thin on the ground.

Not that, given the talent on display here, that’s what you’d ever expect. Drawn by Michaels from a varied selection of sources – Dan Aykroyd from Canada, John Belushi from the Chicago comedy/improv troupe Second City; Chevy Chase, who made Michaels laugh when they were waiting in line outside a movie theatre – these members of the “Not Ready For Primetime Players” went on to take the lead in pretty much every comedy movie between 1980 and 1985.

The material, though – almost inevitably, given the exigencies of a weekly show – is hugely variable in quality. Heavily geared towards old chestnuts like parodies of television advertising, and with a logical bias towards topicality – there are more jokes about Gerald Ford and Jimmy Carter here than you could ever want – hour upon hour of this set is simply not remotely funny at all. Small wonder that SNL’s previous DVD strategy has been to compile performer “Best Ofs”.

Funny or not, these uncut shows allow you to witness plenty of uncomfortable moments, and an ensemble growing in confidence and notoriety. Dan Aykroyd (writer, actor, can do all the accents and impressions) proves himself to be the midfield general of the team. John Belushi, whose “Samurai” bit provides some of the isolated moments of hilarity, shows himself to have possessed from the outset a warm genius for engaging physical comedy. Comic schadenfreude, meanwhile, comes in the person of Chevy Chase: his smirking, self-serving contributions (“I’m Chevy Chase. And you’re not.”) got him to Hollywood first. But at what price?

All round, it’s a compelling historical document. For all the innovation that the show represented, and the supposed danger of the format, though, what you’re reminded of most strongly, by Saturday Night Live: The Complete First Season is a phrase from an older theatrical tradition. However bad it seems in rehearsal, it’ll generally be all right on
the night.