SANDY DENNY & THE STRAWBS – ALL OUR OWN WORK 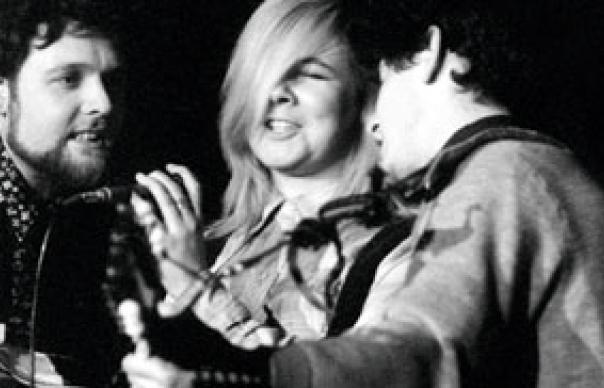 Sandy Denny’s tenure with The Strawbs – consisting at the time of Dave Cousins and Tony Hooper, plus bassist Ron Chesterman – began when the group first met 19-year old Sandy Denny at south London’s Troubadour folk club in early autumn 1966. She mounted the stage clad in white dress and matching hat, and singer Dave Cousins was instantly smitten by her pure, spirited yet slightly vulnerable delivery, her insistence on retaining an English accent.

He and fellow Strawb Tony Hooper hurried back to her flat in Kensington, where they stayed up all night strumming their way through each other’s songs. The following summer, they all set off to Copenhagen for a two-week residency, during which time they were recorded – primitively, in a disused cinema on three-track sprocket tape – by Karl Knudsen of Sonet Records. The results were never officially released until a budget issue in 1973 (long unavailable until this remaster, Sandy Denny And The Strawbs made No 8 in Uncut’s recent list of Great Lost Albums). And by then, Denny had passed through successful stints from Fairport Convention to Fotheringay and back again, guested on Led Zeppelin IV, and released three solo albums.

When these recordings were made, though, she was hardly a novice on the scene, having played in the Johnny Silvo Four, and dated Jackson C Frank, Bert Jansch and Danny Thompson. Now she was living an independent life as a folk singer, pounding the clubs of London and its satellite towns. But she had already written the song that would become her calling card. “Who Knows Where The Time Goes”, originally titled “Ballad Of Time”, which appears on this CD twice (once in demo form, with sparing but lovely accompaniment from a small string section), sounds remarkably mature even in these early versions, with Denny’s vocal eddying around her own guitar in fluttering gusts of emotion.

The Strawberry Hill Boys were products of the skiffle-into-folk clubs of the early 1960s, and their own repertoire as represented here is generally mired in competent, even entertaining derivations of pre-existing musics – bluegrass in “Wild Strawberries” and “Strawberry Picking”; Mamas & Papas-style close harmony in “Nothing Else Will Do” and “On My Way”; Herman’s Hermits (on the throwaway “Sweetling”); The Byrds on “All I Need Is You”, with its vaguely psychedelic line about being followed by cats with green and purple eyes. A couple of Cousins songs, “How Everyone But Sam Was A Hypocrite” and “Poor Jimmy Wilson”, also betray debts to Ray Davies’ English vignettes in The Kinks.

But every time Sandy enters, the group is transformed. Despite some shakiness (striving for the high notes on “Sail Away To The Sea”), she’s superb on the drone-folk shimmy of “Tell Me What You See In Me”, which features Asian instrumentation – sitar and tabla – which Denny never explored again; and on the breathy ballad “And You Need Me”. Here, too, is her first crack at “Two Weeks Last Summer”, the hypnotic reverie covered by Fotheringay on their aborted second album – here in a version pregnant with reverberant echoes. Her raucous take on the Dylan-ish “Nothing Else Will Do” beats Cousin’s muted run-through hands down, even though his version made the final cut.

Three previously unreleased tracks are included (none featuring Denny), in a more acid-folkie vein that points towards where Strawbs went next: “The Falling Leaves” could have slotted nicely with the pastoral/Arthurian fantasia of Dragonfly, while the thumbnail Victoriana sketches on “Indian Summer” is of a piece with 1970’s Just A Collection Of Antiques And Curios.

Denny replaced Judy Dyble in Fairport Convention in early 1968; without her, The Strawbs had a convincing crack at English folk-rock, culminating in the gothick From The Witchwood and visionary prog of Grave New World. (“Part Of The Union”, which Cousins didn’t write, wasn’t until 1973.) These remasters provide higher definition than previous CD issues, making this the definitive edition of an important transitional work.
Rob Young

Q&A Dave Cousins
There’s an American flavour to much of this early material…
We were in a transition period between being Britain’s first bluegrass group and writing our own songs. I was listening to The Mamas & The Papas, Love, Tim Buckley and Tom Rush at the time, and it must have rubbed off. I was not interested in reviving old traditional British folk songs, I was more interested in putting my guitar in tunings that I had replicated from banjo. Sandy loved the songs and you can tell that from the intensity she put into her singing.

What stood out about Sandy’s voice?
Sandy was mesmerising – her voice was pure and ethereal and yet within the same breath she could become gritty and determined. Her father stayed in touch with me years later, and Sandy told me a lot of things about her early life that explained her sadness. On the other hand, she was one of the lads when it came to a fag, a drink and a dirty laugh.

How difficult was it when Sandy left for Fairport Convention?
Sandy felt very guilty about it, but had the courtesy to phone me. I was very disappointed and went into a church in the West End to think about the future. Luckily A&M came along so Strawbs took on a different dimension, but I often wonder what might have happened – maybe Sandy would have become a major star. We still stayed the best of friends and I can still hear her laughing…
INTERVIEW: ROB YOUNG