RUFUS WAINWRIGHT – ALL DAYS ARE NIGHTS: SONGS FOR LULU

Just voice and piano. Not as simple as it sounds... 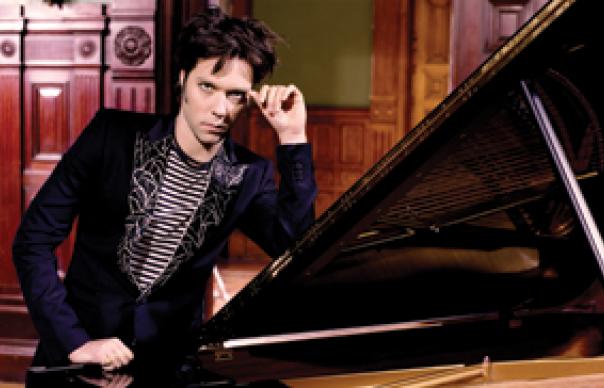 Fans of the glittering Rufus Wainwright have grown accustomed to his orchestral excesses, his baroque flourishes and his Busby Berkeley sensibility.

Now, having made the rather astounding leap from pop star to opera composer with Prima Donna – and pulling it off without being boiled alive by opera critics – Wainwright has made an abrupt about-turn and recorded an album with just voice and piano.

But in Wainwright’s world, the absence of an orchestra doesn’t necessarily mean modesty or restraint. He describes the piano as “my main mistress”, and in part All Days Are Nights was designed as an exploration of his own piano technique. Evidently he’s quite proud of his classical chops, and it doesn’t take much imagination to detect glimpses of Schumann or Debussy threading through these dozen pieces, though there are moments when the finished product could have used a little less piano in the mix and a bit more voice.

Sometimes the album sounds like a pitched battle between the singing Rufus and the playing one, not least on opener “Who Are You New York?” It’s a kind of magic travelogue: New York can be like a living character in Wainwright’s songs, an effect that would be still more magical here if the non-stop key-board whirlwind left more space for his words.

The music starts to grip most powerfully when it’s more allusive and introspective. The central portion of the disc comprises three Shakespeare sonnets which Wainwright set to music as part of Robert Wilson’s Sonette, a gender-bending production of 24 of the sonnets staged at the Berliner Ensemble last year. He has devised a subtly distinctive approach for each of them, from the mysteriously ascending phrases of “When Most I Wink” (Sonnet 43) to the circling triplets of “Shame” (Sonnet 10).

Much of the album was written in the shadow of his mother, Kate McGarrigle’s fatal illness, which has given it a poignant emotional cast, even if the songs mostly don’t address the subject directly. One which does is “Martha”, a typically fearless insight into the way Rufus and his sister clung even more closely together as Kate’s condition worsened. “Neither of us is really that much older than each other,” he sings, a recognition of the levelling effect of passing time. Indeed, the event seemingly transformed the dynamics of the whole Wainwright clan, including estranged dad Loudon: “Have you had a chance to see father… there’s not much time for us to really be that angry with each other.”

The ‘Songs For Lulu’ part of the album title relates to Wainwright’s fascination with the Lulu character in the 1929 German silent film, Pandora’s Box. A trifle esoteric, but once you know that Lulu is a tempestuous vaudeville performer who wreaks havoc on those around her, it begins to make sense. According to Rufus, three songs relate to his concept for an imaginary stage musical with a Lulu-centric theme. “The Dream” begins modestly before building up to a crescendo of thumping chords and impetuous glissandos, whereas “True Loves” and “What Would I Ever Do With A Rose?” display more formal restraint while heaping on luscious dollops of melody. The faintly Parisian feel of “…Rose?” leads neatly into “Les Feux d’Artifice t’Appellant”, an aria from Prima Donna in which Rufus gives vent to a vaguely Debussian impressionism. The LP closes with “Zebulon”, an ode to a high school friend he once had a crush on. Its ghostly weightlessness, over which Wainwright dreamily ponders issues of love, loss and what “freedom” really means, provides a suitably quizzical conclusion to an album that refuses to unravel itself without a fight.
Adam Sweeting


Q+A
Your mother’s illness must have overshadowed the album?
My mother meant a lot to a lot of people so I feel the need to celebrate her and share her legacy with fans. She infused my sister and I with her love of the limelight, of music and art. Also there was a reaction to the huge projects I was involved in – my opera and the Sonette project in Berlin – where I needed to lick my wounds and ponder the universe alone for two seconds.

Does your songwriting start at the piano?
No, most of it starts while I’m walking around. I’ve written so many songs that writing lyrics has become a bodily function like you eat food and shit. I look at things and a lyric comes out.

Is “Lulu” your old party-going self?
Partly. It refers to the dark, brooding underbelly that inhabits all of us. I’ve discovered that a lot of those reckless, nihilistic feelings I had in my twenties didn’t go away. But I always seem to come back to the story of Lulu from Pandora’s Box. I see this dance number with Lulu and Fred Astaire for some reason, on some grand staircase.
INTERVIEW: ADAM SWEETING