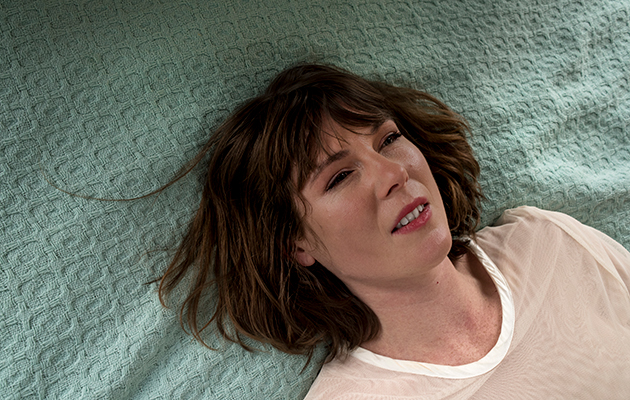 When Rosali Middleman was writing songs for her second solo album, she lived in an apartment next to noisy railroad tracks. At first the sound of passing freights was deafening, especially when she was trying to work out melodies and lyrics. “I write very improvisationally and intuitively, and I record everything,” says the Philadelphia-based singer-songwriter. “I love the sound of trains and everything they represent, but it was right outside my bedroom window, this loud sound of screeching brakes.” While it disrupted her songwriting, eventually she grew to appreciate that unpredictable racket, which inspired, in a roundabout way, the chugging  guitars and persistent rolling tempo of the psychedelic number “Rise To Fall”.

The song is a showcase for her nimble backing band, which includes members of The War On Drugs, Purling Hiss and other Philadelphia acts, but mostly it’s a showcase for Middleman herself, for her subtly inventive guitar playing, for her understated vocals, and for her elusive songwriting, which zeroes in on a lover so obsessively that it takes on the unstoppable power of a locomotive. “There’s no-one above you, no-one below,” she sings. “Feeling alarmed, feeling alarmed.” “Rise To Fall” reveals a singer-songwriter who gives ample time over to lengthy guitar jams, letting her songs sprawl beyond the words she’s written. Or perhaps it’s the other way around: perhaps Middleman is an instrumentalist first, an adventurous player who ratchets her jams to carefully constructed, yet still impressionistic songs.

Trouble Anyway is only Middleman’s second album. Originally from Michigan, she went to college in Minnesota and worked as a dairy farmer in Vermont before moving to Philadelphia 12 years ago. Since then she has spent time in a number of local bands, first as one half of the duo Blood Like Mine and later as one-third of the power-punk trio the Long Hots and the improvisational supergroup Wandering Shade. Those various acts have allowed her to hone her chops in a range of roles: as a solo artist, as a supporting player, as a collaborator, as an improviser. All of that came to play on her solo debut, Out Of Love, which made Uncut’s list of top albums for 2016. Devised with Gerhardt Koerner of the Lilys, it featured a lo-fi, predominantly acoustic palette in which Middleman’s guitar playing could stretch out and take on different sounds and forms. The music was cerebral, but the songs were anything but. She wrung maximum emotion out of her lyrics, thanks to a voice that was both deadpan and soulful, vulnerable and determined. She came across as an artist permanently steeling herself against bad news.

Trouble Anyway amplifies all of those qualities. The arrangements are lusher and less lonely, more detailed and more open to improvisation. They sound spontaneous, as though these recordings capture only one iteration out of infinite possibilities. Nothing is settled on songs like the languid epic “Silver Eyes” or the starry-sky shuffle “Who’s To Say”. The music slips easily from urban indie-rock to country-tinged folk, from edges-blurred psychedelia to low-key torch balladry. Trouble Anyway ultimately sounds like a communal record, not the product of a lone artist but that of a musician surrounding herself with friends and deploying them like she would an effects pedal or a keyboard patch. Middleman duels with guitarists Paul Sukeena (Spacin’) and Mike Polizze (Purling Hiss) on “Lie To Me” and “Rise To Fall”, while Mary Lattimore adds dramatic flutters of harp to “If I Was Your Heart” and keyboards to “Dead And Gone”. Stitching everything together is a makeshift rhythm section featuring bassist Dan Provenzano of local noisemakers the Writhing Squares and drummer Nathan Bowles, best known as an American Primitive banjo player but also formerly a drummer in Steve Gunn’s touring band.

Of all the sounds and styles these players indulge, perhaps the dominant mode here is blues. Middleman is not a blues artist per se, and any influence from Howlin Wolf or Robert Johnson or Junior Kimbrough is indirect. Rather, her songs have the feel of blues, if not exactly the sound. She’s got trouble in mind, to quote Lightnin’ Hopkins. Indeed, Middleman writes probingly about sexual politics and the inability of men and women to truly connect – a popular subject of blues songs. “I’ll be half a woman to your half a man,” she sings over a parallax cluster of guitars on “Lie To Me”, “and I’ll keep the other half ’til you learn how to stand.”  You could imagine Ma Rainey or Bessie Smith delivering those lines with a leer and a wink.

Trouble Anyway is not exactly a breakup record, but something a bit more elusive, a bit more unsettled. At times it sounds like a record of staying together when you know breaking up would be so much better, so much healthier. “The trouble I’ve found lying in your arms is the trouble I’d be troubled with anyway,” Middleman sings on the title track, as the guitars do the worrying and hand-wringing for her. By the time she gets to the final track, “Maybe I’m Right”, her perspective sounds hard won, the song quiet but the sentiments very loud: “Felt like self-destruction in the middle of the night,” she ponders. “Starting to question the path of a line. Maybe I’m right… Maybe I’m right.”

Rather than belting out these songs, Middleman deploys a deadpan that prizes subtle and microcosmic shifts in tone and intention. Like Aimee Mann, another singer-songwriter to whom she bears more than a passing resemblance, she understates her lyrics so that that they hit you harder; she makes you lean into these songs, listen a bit more carefully, carefully parse her phrasing and her words. And perhaps that’s another aspect of the blues in these songs, this sense of evoking a feeling just out of reach, either too intense or too enormous or too nebulous or simply too horrific to put into words with much accuracy. These are songs about emotions, but they are not necessarily emotional songs. “Tears they rolled away, cried a lake,” she confesses on opener “I Wanna Know”. “What am I today?/Cry a little longer.” “Cried a lake” is so succinct and evocative, pointing to a grief as large and as dangerous as any body of water in which you could drown. Another songwriter might have made that image the whole point of the song, but Middleman has the confidence to tuck it away into a corner of a verse, where it lies in wait for the listener.

Middleman sings “I Wanna Know” in a hush, as though she’s a safe distance from whatever made her cry a little longer in the first place. To her credit, however, she is never at a safe distance from her listeners. She makes these songs sound edgy in their immediacy, prickly in their intimacy, as disruptive as a passing train. Trouble Anyway announces the arrival of an artist who fits neatly into no category, but thrives in the inbetween.