It’s 1978 and the Rolling Stones have just left the soggy vagueness of their mid-70s career behind, only to come across punk and new wave. 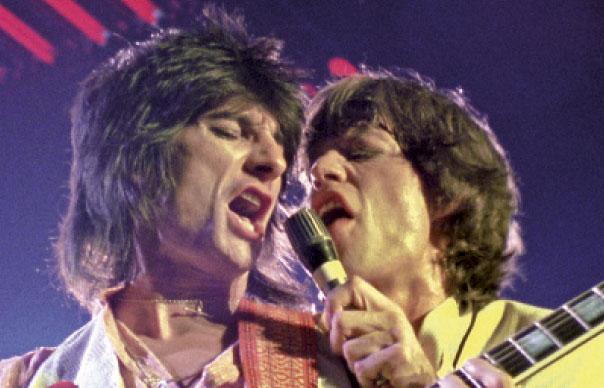 It’s 1978 and the Rolling Stones have just left the soggy vagueness of their mid-70s career behind, only to come across punk and new wave.

Admittedly, they’re the Rolling Stones and not ELP, and if we’re honest, The Knack and The Jags aren’t much of a challenge, but it’s different times for rock. This concert, filmed at the Will Rogers Memorial Centre, Fort Worth, on July 18, 1978, shows the Rolling Stones in what you could call their post-pomp; fast, skinny, with Ron Wood for extra leanness. Songs like “Star”, “Shattered”, and “When The Whip Comes Down” are still recognisably Stonesy but also fit the new era (as does, we must conclude, Mick Jagger’s large red plastic hat, which he wisely ditched after three numbers). This is a spikey set, in which almost every song sounds like a lost Chuck Berry number (except for “Miss You”, which sounds, perhaps presciently, like an eight minute version of Rock “The Casbah”).

This DVD has been released as a companion piece to the reissue of the Some Girls album, which receives the same deluxe treatment as Exile On Main Street in 2009. The core item is a well-filmed 80 minute show, with decent sound and enables us to see Toronto-era Keith, surprisingly perky (and with his mouth about to finally stay like that to give him the Keef Face we all know and fear today), and it’s from an era when a new Stones album means as many as six songs from that new album, which is just as well as Some Girls works fab live (it’s nice to see the Stones’ most New-Wavey song, “Shattered”, given a good whizz round the track).

Anyone wishing to see a 1978 era film of the Rolling Stones performing songs from Some Girls, and other hits – they bat “Honky Tonky Women” out of the park three songs in, which is always impressive – will not be disappointed. By the time we’ve passed the still-droll “Respectable” (a song about the possession of cake and the simultaneous consumption thereof) and the marvellous “Far Away Eyes”, we are cleared for greatest hits territory and a visit to the Land of Keef (“Happy” followed by “Sweet Little Sixteen”) while Mick is wearing a swastika Destroy T-shirt and rubbing his knob. It’s a rambunctious concert to say the least. I couldn’t see Margaret Trudeau.

For once, the accompanying Extras are surprisingly relevant (by which I mean, they’re not a glued-together montage of photos and silent home movie clips disguised as a documentary). There’s a Saturday Night Live Dan Aykroyd spoof interview with Jagger, which is funnier than most SNL sketches and, like most SNL sketches, doesn’t so much outstay its welcome as squat in its welcome’s house until the police come. The Stones then perform about a quarter of an hour of Some Girls numbers live, Jagger in a royal blue velour beret, and rip the place up. You also get a 1978 interview by Geraldo Rivera with the band as they rehearse in Woodstock. Jagger compares the band to a bunch of “really dumb football players” and Keith says, “What else am I gonna do? Retire?” as he always has. It’s short but charming. Finally, for people who must watch everything, there’s also a contemporary interview with Jagger about the album which is of interest to fans of Mick Jagger thinks about the album now.
EXTRAS: Interviews, SNL sketch, performances.
David Quantick