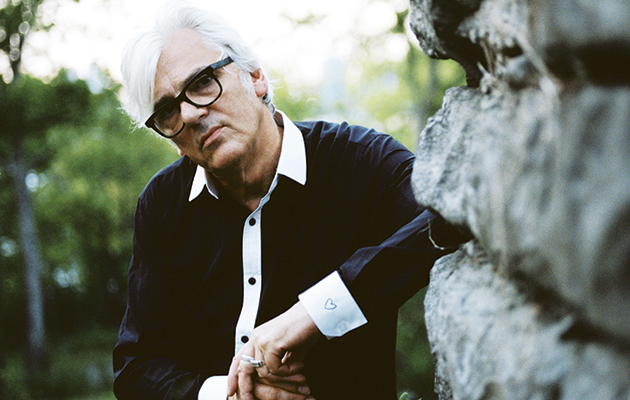 For most of his creative life, Robyn Hitchcock has been in a state of flux. A songwriter as in thrall to PG Wodehouse, Mervyn Peake and Syd Barrett as he is to Bob Dylan, Lou Reed and The Byrds, he’s long been torn between Britain and America. Being better-known in the States has meant a lot of touring there, and Hitchcock has spent almost as much time overseas as he has in London, or on his beloved Isle of Wight.

This US/UK seesaw isn’t the only one he’s on, either. Across 40 years of releasing records, he’s also repeatedly swung between the poles of hushed acoustic folk and psychedelic power-pop; sometimes, with 1984’s I Often Dream Of Trains and 1985’s Fegmania!, or 2004’s Spooked and 2006’s Olé! Tarantula, hitting those extremes in the space of just two records.

In the 11 years since Olé!, however, his last genuinely ‘loud’ album, and also his final LP to be recorded in America, Hitchcock has moved steadily towards more sedate acoustic material, largely recorded in London and typified by 2014’s gossamer-fine, Joe Boyd-produced The Man Upstairs.

In an inevitable but overdue oscillation, then, Robyn Hitchcock – his 21st solo album and first to be self-titled – finds the songwriter wrenched hard back to America and the fried rock of his ur-indie ’70s troupe The Soft Boys, or the colourful, Surrealist new wave of the Egyptians. The quirks might have been turned down a little – aside from some oozing mackerel, there are few seafood shout-outs – but Hitchcock, now ensconced as one of Nashville’s rare pedestrians, sounds more energised and vibrant than he has in decades.

Much of the vibe is likely down to producer Brendan Benson, who begged the guitarist to make a record like The Soft Boys, but the prime strength of Robyn Hitchcock is down to the meat of its 10 songs. Opener “I Want To Tell You About What I Want” is a stunning power-pop return, complete with four brave, wordy verses taking in telepathy, “cannibal overlords” and a future where cats become the planet’s dominant species. In “Virginia Woolf”, an angular, glammy stomp, Hitchcock inhabits multiple emotional perspectives within three minutes; first, he inspects suicide with grim gallows humour – “Sylvia Plath, she lay down on the floor/Sylvia Plath, opened one final door” – before his crooked smile fades, and he laments, multi-tracked and pale, “Sometimes you feel what you don’t want to feel/Sometimes it hurts.”

Aside from pedal-steel on the stately “Sayonara Judge” and “1970 In Aspic”, and the twanging Johnny Cash parody “I Pray When I’m Drunk” (“I think about you every time I strum”), there’s little evidence of Nashville on Robyn Hitchcock, despite three of the city’s top session musicians comprising the rhythm section. In fact, living in Music City seems to have sharpened the songwriter’s sense of his own history. In particular, on “Raymond And The Wires”, he delves deeper than ever before, and recalls riding on a trolleybus with his father in 1964. “We couldn’t sit upstairs because my father’s leg was bad,” he croons, before movingly reflecting that although he “didn’t know him close”, his father “travels ’round beside me now, he goes everywhere I’ve been”.

“Raymond…” is built around soft arpeggios and mildewed cello, but the rest of the album showcases Hitchcock’s unsung skills on the Fender Telecaster. Though his electric guitar-playing can be overshadowed by his acid lyrics and floral shirts, Hitchcock’s work here demonstrates precisely why no less a guitarist than Graham Coxon enlisted him to play lead on his Spinning Top album in 2009. Melding the tumbling runs of Richard Thompson, the unsculpted aggression of Syd Barrett and the barbed, Oriental accents of Roger McGuinn, Hitchcock’s parts on the likes of “Mad Shelley’s Letterbox” and “Time Coast” are sublime.

His playing is a particular revelation on the penultimate “Autumn Sunglasses”, one of the most complete pieces of Hitchcock’s long career. Taking one of his great vespertine melodies, he and producer Benson thread it with overdriven cello, taut drums, crystalline 12-string and an orchestra of backwards guitars flowing like so many falling leaves. “Feel the warmth/Through the looking glass/Now you’re gone/Your reflection remains,” he murmurs, looking back with equal measures of desire and regret.

Whichever way the pendulum has swung over his 40-year career, Robyn Hitchcock’s muse has remained gloriously timeless. He may change his scenery on the outside – whether he’s using acoustic or electric, in the US or Europe – but reassuringly he’s still the Dylan, Barrett and Beefheart obsessive who would cover Lennon’s “Cold Turkey” for gobbing punks. “I’m singing to the ruins/I’m singing from the past,” goes the final verse of robust closer “Time Coast”. “I’m singing like a fossil/Time goes by so fast.” Robyn Hitchcock may excavate an ancient style, then, but there’s nothing archaic about the result. “I made it just in time,” goes its joyful final line.

Q&A
ROBYN HITCHCOCK
What’s it like recording and living in Nashville?
Where I am you feel like punk is yet to happen – it all feels like it’s before summer 1976, a lot of hairy blokes. You feel like Zuma has just come out, or maybe Grievous Angel. It’s pretty good, because it’s not very big yet, but it’s quite affordable and it feels international, it feels like Los Angeles or New York. But having said that, I’m the only Brit that I see around. I think Steve Winwood has a place here, but I haven’t seen him buying Marmite in the local Whole Foods. I can see why Dylan went to record here. What you’re getting for your money is a really confident band, it’s not all twangy stuff. Nashville’s a very good place to make a psychedelic rock album.

A lot of these songs seem to be reflecting on your past – was this intentional?
In my songs, nothing’s intentional. The songs are the mistresses, they steal upon me like cats, they come to you when they want you. I sometimes find I’m walking around, or trying to do the accounts, or washing up, or any other human activity, and I realise a song is actually playing itself in my head. So I have no control over the songs. But they were all written off the British mainland. And they seem to be about my life, people I knew or I’d heard of, or people that were invented, and a lot of hybrids as well.
INTERVIEW: TOM PINNOCK