Moving, ethereal and not a little odd – it’s the jazz standards songbook as you’ve never heard it before.... 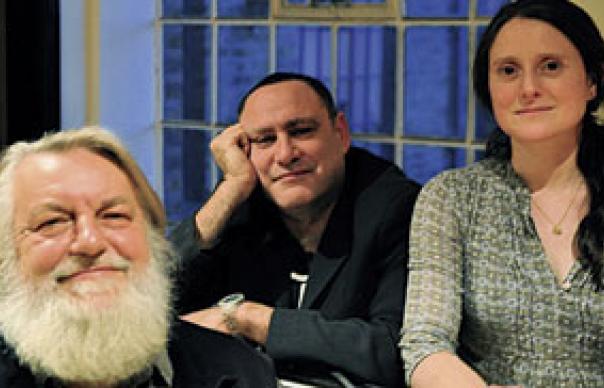 Since his early days in Soft Machine, Robert Wyatt has always occupied a distinct but ambiguous territory, a place where jazz and popular song bleed into each other and are informed by a wider culture of poetry, politics and painting. Who else would sing “I’m A Believer” alongside Billie Holiday’s “Strange Fruit”?

The Ghosts Within typifies the uniqueness of Wyatt’s oeuvre, though on this occasion it’s not just his. Violinist, composer and tango player Ros Stephen plus saxophone tyro and political writer Gilad Atzmon make this an equilateral triangle of talents. Atzmon has previously played on Wyatt’s albums and collaborated with Stephen on Gilad With Strings, a project honouring Charlie Parker’s dalliance with classical orchestration.

The spirit of bebop maestro ‘Bird’ Parker is just one that stalks this luscious, plaintive song cycle, which blends original Wyatt compositions with jazz standards like “Round Midnight” and “Lush Life”. Its atmospheric arrangements and bravura playing are as much part of its appeal as Wyatt’s evergreen vocals, which are little different at 65 from 40 years ago.

The opener, “Laura”, encapsulates the collective approach. Written by Johnny Mercer for the movie of the same name, “Laura” has been widely covered by crooners like Sinatra and Nat King Cole, and was given instrumental wings when Charlie Parker covered it. Stephen’s strings are more daring than the sweet arrangements laid on in the 1950s, however, with Wyatt likewise opting to sing slightly off-key, Chet Baker-style. Gilad’s playing has the fluidity and lyricism of Parker, though elsewhere on the album, his clarinet playing crosses Bird’s style with the music Atzmon grew up with in Israel.

In its way The Ghosts Within is quite a shape-shifter. “Lullaby For Irena” and the title track – both Wyatt tunes with lyrics by his long-time partner Alfreda Benge – continue the reflective mood, but “The Ghosts Within” soon heads off on a tango-laden tangent and is sung by Tali Atzmon, Gilad’s actress wife.

More surprising still is the way in which “Where Are They Now” goes from a playful, 1920s tune into electro beats with a middle-Eastern rap; it’s entertaining enough but its upbeat mood strikes a jarring note on what is essentially a contemplative album.

“Maryan” – which despite the title is a song about salmon returning upriver to spawn – originally appeared on Wyatt’s 1998 album Schleep. The version here is slightly less dreamy, more propulsive, with Atzmon’s soprano sax dancing against a growling undercurrent of synths.

Thereafter it’s jazz evergreens that dominate. “Round Midnight” drifts past on tremulous strings, its melody whistled by Wyatt, picked out on concertina and blown unshowily by Atzmon. “Lush Life”, a song written by Duke Ellington’s sidekick Billy Strayhorn, is another much-covered favourite, as is “What’s New”, most famously rendered by Sinatra. Both are played straight, setting discordant strings against Atzmon’s melodic saxes and Wyatt’s searching, pathos-laden voice. Irresistible. Duke Ellington’s “In A Sentimental Mood” is principally a showcase for Atzmon’s clarinet, with Wyatt confining himself to a non-verbal singalong.

Wyatt last covered Chic’s “At Last I Am Free” back in 1980. This new version, suggested by Stephen, is primarily a mood piece, Wyatt singing just the lines “At last I am free/I can hardly see in front of me” over a trembling wash of strings and wistful concertina. That leaves what must be the album’s surprise cut, “What A Wonderful World”. Forever defined by Louis Armstrong’s original, sentimental take, this was surely a cover version too far, an accident waiting to happen. Yet Stephen, Wyatt and Atzmon turn the song into something fresh and optimistic. Remarkable.
Neil Spencer

Q&A
Robert Wyatt singing “Wonderful World” is a turn-up…
Gilad ends his set with it, ’cos he’s funny like that. I would only attempt it and the other covers with musicians who know what they are doing. Gilad has been a Mozart player, he can be-bop on clarinet, he’s amazing. Ros did such a good job it made it hard for me to fuck up. She didn’t stick down a blanket of strings, she wrote proper charts and it was interesting negotiating her changes. I sometimes think these young classical players are the most open-minded musicians – they are so unpretentious, with none of that snootiness you used to get.

Why didn’t you sing “Sentimental Mood” and “Round Midnight”?
The words aren’t as good as the melody – the lyrics have just been stuck on to make them into songs. One I whistled, one I hummed. Me anglicising the songs is just a bit of nip and tuck, not an ideological statement; “Lush Life” is technically hard, a mountain to climb for the unsuspecting singer.

You are still politically involved…
There’s a W H Auden line – “We are all conscripts of our time”. The types of racism, sexism and gay-bashing we have known are diminished, but there is still a global racism in operation. In October we are planning an event to raise awareness about Gaza.

What else are you up to?
Watching Swedish detectives on TV! I have hundreds of snaps of chords and words waiting to be assembled. I’m 65 now. If I had a proper job I’d be retired.
INTERVIEW: NEIL SPENCER