Robert Plant & The Band Of Joy – Live From The Artists Den

Relaxed session from the Golden God of Nashville... 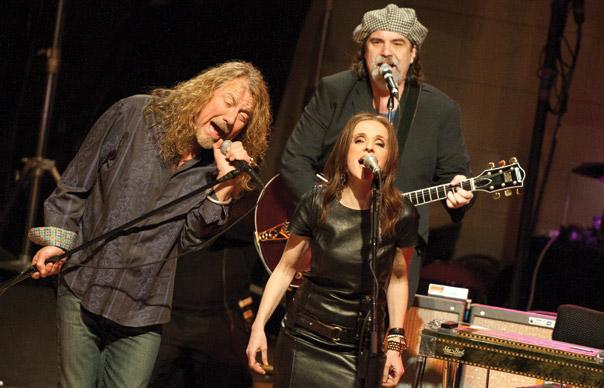 Relaxed session from the Golden God of Nashville…

In the interview included as one of the Extras on this live DVD, Robert Plant muses upon the history of his Band Of Joy, from its original ’60s versions as, firstly, a soul group playing Otis Clay covers, then a hippie combo that would effectively join forces with the New Yardbirds to form Led Zeppelin, through to its more recent incarnation in which his interests in Americana and psychedelia have become ingeniously braided. “Who would have known,” he says, “that in my 62nd year that the Band Of Joy would become trippy again?”

Who indeed? Although, admittedly, Plant’s course didn’t actually involve that big a jump from the Raising Sand experience that revitalised both his musical and commercial profiles, with guitarist Buddy Miller retained as a sort of roots guru, Patty Griffin substituting for Alison Krauss, and Darrell Scott bringing an extra multi-instrumental dimension to the band’s sound. But this time round, the live show recorded at the Tennessee Performing Arts Centre in Plant’s current home Nashville reveals a band looser in approach, tighter in feel, and unafraid to take liberties: the opening version of “Black Dog”, for instance, is taken at a languid swagger, rootsier than the Zep original, though not lacking for bite courtesy of Miller’s snarling lead solo.

Both Miller and Scott look like grizzled extras from a Sam Peckinpah western, and Griffin is a picture in her black leather mini-dress; Plant, meanwhile, is as genially leonine as ever: he could play the Cowardly Lion in a production of The Wizard Of Oz without overly troubling the make-up department, and his smiles reveal a man well at ease with his direction. Los Lobos’s “Angel Dance” suits him perfectly, its great rolling groove like a big warm hug, with Scott’s mandolin providing top notes and Griffin’s harmonies setting off Plant’s delivery, which throughout is relaxed rather than raucous, teasing meaning from lyrics rather than wringing them dry. At the song’s heart, though, is drummer Marco Giovino, using unusual beaters to get that floppy-boot sound, and cloths to damp the hi-hat.

The interplay between Miller and Scott is crucial to the Band Of Joy sound: Scott’s mandolin on Richard Thompson‘s “House Of Cards” is set off beautifully by Miller’s wiry lead break, a blur of string-bending curlicues, while the new, countrified approach to Zep’s “Houses Of The Holy” matches Miller’s lead with Scott’s whining pedal steel. Both guitarists, along with Griffin, get individual vocal showcases, Plant’s bluesharp wailing behind Miller on “Somewhere Trouble Don’t Go”, and Scott’s aching, plaintive delivery of “A Satisfied Mind” serving as a teasing taster to his own new album.

Plant’s always had a folk-rock spirit, even in his hard-rock days, and here he gets to give it freer rein than ever, on a hauntingly sombre “Satan Your Kingdom Must Come Down” and an “In The Mood” incorporating fragments of “Come All Ye”. Even the Zep back-catalogue is reinterpreted in this light, with a folk-rock “Ramble On” and “Gallows Pole” on which Scott’s banjo picks over the skirling swirls Miller draws from an odd-looking guitar. A climactic “Rock And Roll”, by contrast, is done as a rockabilly stinger, with a hefty swing and a lovely, affectionate little tribute to John Bonham’s signature drum figure right at the end. Finally, the entire band downs instruments to join forces on an acappella “I Bid You Goodnight”. It forms the perfect bridge between Plant’s memories of The Incredible String Band, and the American players’ native gospel-country heritage: different routes now leading to the same place.