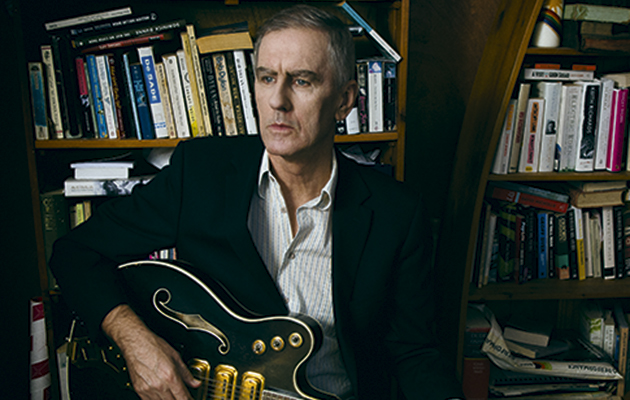 When Bob Dylan released Modern Times in 2006, Robert Forster wrote an incisive essay in The Monthly about his hero’s shape-shifting personas. In particular, he examined Dylan’s most recent incarnation: as a grizzled older man, getting on a bit yet still swinging, facing down death with a tune.

“His best songs of the last ten years bear comparison with the best of his ’60s work,” Forster wrote, “and more importantly they offer a new voice: cracked, lovelorn, pessimistic, gallows-humoured, still towering over his generation. Old age suits him.”

Over his last decade, Forster, now nearing 60, has gone through a few reinventions of his own. First off, 2008’s The Evangelist suggested he was following Dylan’s example and embracing the cruel passage of time just as it had embraced him. Inspired by the sudden death of The Go-Betweens’ co-founder and co-writer, Grant McLennan, in May 2006, the record was slow, sparse and filled with ruminations on loss. It had its beautiful moments, sure, but the sarcasm, the louche sophistication and the playful, biting wit that have long characterised Forster’s best work were, understandably, taking a back seat. It was as if Bryan Ferry had suddenly morphed into Nick Drake.

The Evangelist was something of an anomaly, though; in the years since, Robert Forster has become the renaissance man he’s long cast himself as in his songs. His career as a music critic has flourished, even resulting in a publication of his columns, The Ten Rules Of Rock And Roll; he’s compiled the reissue series G Stands For Go-Betweens, Volume One of which was released earlier this year; he’s begun producing for other people, including The John Steel Singers on their 2010 debut, Tangalooma; and now he’s not only writing songs about Rupert Bunny paintings, he’s so respected as a cultural commentator that he’s actually invited to galleries to talk about them.

With Songs To Play, Forster has finally returned to his old job, and – defying the example of Dylan – ignored the advancing years. Crucially, these are some of his finest songs in decades. Strikingly immediate, yet also rewarding repeated immersion, the 10 tracks here are, just as Forster intended, amusing, infectious and relaxed, a world away from the seam of sadness at the heart of The Evangelist. That lyrical wryness, as typically Australian as it is Forster-esque, has returned, with the songwriter heading out on wild flights of fancy; notably on the poised, acoustic “Songwriters On The Run”, a rather meta tale about two fugitive musicians who eventually hide out with a gig promoter, and “Disaster In Motion”, an atmospheric portrait of a small, isolated town. “Population 80, nothing much here,” he sings over watery organ, acoustic guitar and muted bass. “Things just drift from year to year/Once there was a scandal, once there was a flood…”

Unlike The Evangelist, recorded by Go-Betweens producer Mark Wallis on computer in London, Songs To Play was made in collaboration with two of The John Steel Singers, Scott Bromiley and Luke McDonald, and tracked live to tape up a mountain outside Brisbane. It’s arguably the best Forster has ever sounded, with the crisp recording a world away from the digital reverb smears that blighted 1990’s Danger In The Past, or even The Go-Betweens’ Tallulah.

30 years his juniors, Bromiley and McDonald seem to have acted as the young bucks pushing Uncle Robert to again experiment with arrangements. 1996’s Warm Nights was similarly expansive, with lysergic fuzz guitars, oom-pah-assisted country shuffles and stately “Like A Rolling Stone” homages, and Songs To Play picks up where that left off; from the bossa nova rhythms of “Love Is Where It Is”, and the acidic, clattering folk of “I’m So Happy For You”, to the glittering piano and glockenspiel parts that highlight the limping, romantic “And I Knew”, there’s a rich palette of colour here. Throughout much of the record, too, the lilting violin and voice of Forster’s wife, Karin Bäumler, are important textures, echoing Amanda Brown’s contributions to The Go-Betweens’ late-’80s peaks.

Elsewhere, Forster’s songwriting seems to have been broadened by his experience as a journalist, especially on the stunning, keen-eyed “A Poet Walks”. This surreal, five-minute travelogue charts his journey around a rediscovered town – perhaps taking place just after his train trip in 2006’s “Here Comes A City” – and eventually grows into a widescreen Mariachi-tinged epic that brings to mind both Morricone and Love’s Forever Changes. As the chord sequence descends, trumpets blare and violins wail, Forster sings of the psychological journey prompted by his physical travels: “To walk, past all the loves that I’ve known/Past all the lives I’ve outgrown/The skin and the bone…”

It’s not all reverie, either; on “Let Me Imagine You”, a brittle indie-pop paean to the power of the mind in this age of digital over-sharing, Forster delivers the best line of the record, tongue firmly in cheek: “Please don’t twitter/Let me imagine you/I find it sweeter…” Other gems reveal themselves with time: “Kathy got married to Emmylou” on “Disaster…” is deliciously jarring after Forster has set up the traditional, conservative rural scene, while on the punchy, 12-bar opener, “Learn To Burn”, he gets joyfully silly, warning, “I mistook Memphis for a house in Surrey/You can miss detail when you’re in a hurry.”

The Go-Betweens were at their most impressive when they matched traditional pop structures with warped lyrics or experimental textures – “Cattle And Cane”’s cantering, off-kilter rhythm, say, or the detached wordplay of “You Can’t Say No Forever”. Perhaps Forster was reminded of these successes as he compiled the Go-Betweens boxsets, as in many respects, for all the years, joy and pain that have spooled by, the Robert Forster on Songs To Play is very much like the Robert Forster of the ’80s – bookish, aloof, fey, stylish and sarcastic, he’s still speak-singing snarky bon mots like a subtropical Jonathan Richman in an undertaker’s suit, or an Antipodean Lou Reed more comfortable at a gallery than Lexington, 125. Back in 1987, he even turned grey, the result of a reputed eight-hour dye job in unlikely honour of Dynasty’s Blake Carrington.

His modus operandi – white, suburban, left-of-centre indie-pop, still in thrall to the ’60s and ’70s – might not have changed all that much, but Songs To Play is nevertheless his strongest work for decades. It’s to Robert Forster’s credit that he hasn’t settled down into the persona of the older musician, like his hero Dylan, slowing both tempos and heart rates. Instead he’s returned revitalised, buoyed by young blood and new possibilities, reinvigorated by life, art and music. His hair’s now grey for real, yet he’s sounding more youthful than he has in years. Old age suits him.

You can buy Songs To Play from Amazon.co.uk by clicking here