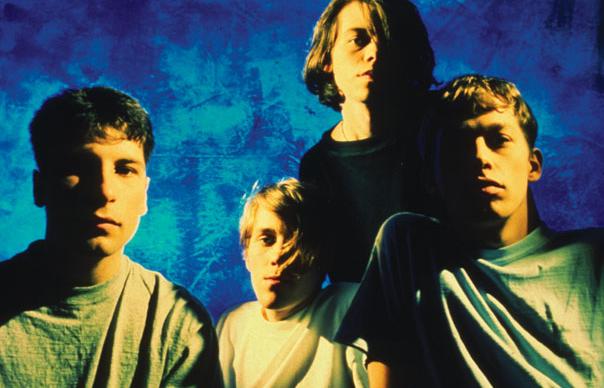 The title of Ride’s second album, twenty years old this March, was the closest they ever came to articulating a mission statement. By calling it Going Blank Again they were wryly acknowledging of the oft-repeated criticism that Ride were a band with nothing to say. It was a neat way of responding: “Yeah – and so what?”

Formed in Oxford in 1989, Ride were among the first generation of British guitar bands not to have witnessed punk’s storming of the cultural Bastille first-hand. Signed to an indie label for aesthetic rather than ethical reasons, they had no desire to smash or subvert the system; Ride were just four nice boys who did what they did, and if anybody else liked it, that was a bonus.

Many did like it, of course. Ride were the first Creation band to crack the Top 40 and represented a shrewd signing by Alan McGee during a period when he was busy shovelling funds the label didn’t have into My Bloody Valentine’s search for the perfect chord and Primal Scream’s search for the perfect high. Ride were dependable and uncontroversial, yet still capable of summoning a majestic cacophony; a clean-cut indie boyband who bolstered their innocent 60s jangle with a formidable sonic assault.

Some of the early EP tracks collected on Smile [6/10] sound a little underfed, but 1990’s debut album Nowhere [8/10] (bolstered here, as with previous reissues, by the addition of the Fall and Today Forever EPs) remains a heady trip. If anything, its wan vocals and docile lyrics that all seem to be about flying, falling or fading – providing plenty of fuel for the “nothing to say” mob – actually serve to ease your ascent into Ride’s whirling soundworld. Anything more substantial would have harshed the buzz.

Encouraged to experiment by shoegazing’s chief enabler Alan Moulder, Going Blank Again [7/10] finds the band discovering other ways to whip up a storm beyond simply stepping on their effects pedals. It’s brighter and ultimately less enveloping than Nowhere, although “Leave Them All Behind” and “Twisterella” are shimmering examples of indie pop at its ingenuous best. The nostalgic yearning of closing track “OX4”, named after the band’s home postcode, is doubly poignant given that the band would never scale these heights again.

Tensions during the recording of 1994’s drippy retro rock folly Carnival Of Light [5/10] led to Andy Bell demanding that his songs be confined to side two, away from Mark Gardener’s. The album is testament to the fact that Ride were better when operating as a harmonious unit than as individual songwriters. A crunchy version of The Creation’s mod nugget “How Does It Feel To Feel?” is the highlight.

Posthumous swansong Tarantula [5/10] isn’t quite as bad as reputed – “Dead Man” is a nifty slice of freakbeat that shows why Oasis eventually came a-knocking for Bell – but it sounds like the work of an assiduous Faces/Stones covers band rather than British rock’s former great white hopes. Gardener contributed just the one song, and walked before its completion.

The fact that Ride’s principal players failed to make any great impact as songwriters following the break-up of the band – Gardener has pursued an intermittent solo acoustic career while Bell’s settled for a role as Liam Gallagher’s straightman – underlines the point proved by Carnival Of Light. At their best, Ride were all about collective rapture rather than individual talent. It’s no coincidence that the lysergic footage from their 1992 Brixton Academy show, included with Going Blank Again’s 20th Anniversary Edition, resembles a beatific rave as much as a rock gig. Ride may never have had much to say, but they sure made a glorious racket.

EXTRAS: Going Blank Again: 20th Anniversary Edition is the only re-released album to come with any new extras, in the form of a sonically remastered DVD of the band’s 1992 Brixton Academy show, previous released on VHS, as well as a new booklet of unseen photos [8/10].
Sam Richards

Q&A
Andy Bell
On the Brixton Academy footage from 1992 you look like a band at the peak of your powers. Is that how it felt at the time?
Yeah. I felt like we did ourselves proud that night. I remember having a big celebration afterwards – me and Loz mucking about in the dressing room, throwing things out of the window. We were on a series of stepping stones up to that point, getting bigger and better all the time. To be completely honest, that was the peak. After that it was all downhill.

When you started the band, did you ever expect to be having Top Ten records?
The ambition was definitely there. We came out of the indie scene – Creation, Valentines, Spacemen 3 – but then again The Smiths and The Stone Roses were having hits. We always felt that good music can be in the charts – you shouldn’t have to compromise, all you’ve got to do is write good songs that appeal to people.

Do you have any regrets about what happened to Ride after Going Blank Again?
It did all go pear-shaped for sure, but in a way Carnival Of Light is a bit of a glorious failure. We thought we were making Dark Side Of The Moon but it ended up just being a slightly retro-sounding record in the background while Oasis were taking over. We took a wrong turn. But no regrets, really. It was part of my life and I look back on it philosophically.

Why are the chances of the four of you playing together as Ride again?
I’d hate to feel like I’d got to the end of my life and it hadn’t happened. We should definitely do it at some point, but I don’t think it’ll be like anyone expects. I’m certainly thinking about getting back into the studio with the Ride guys and having a bit of a play. But that’s somewhere down the line, I think.
INTERVIEW: SAM RICHARDS