REM – FABLES OF THE RECONSTRUCTION 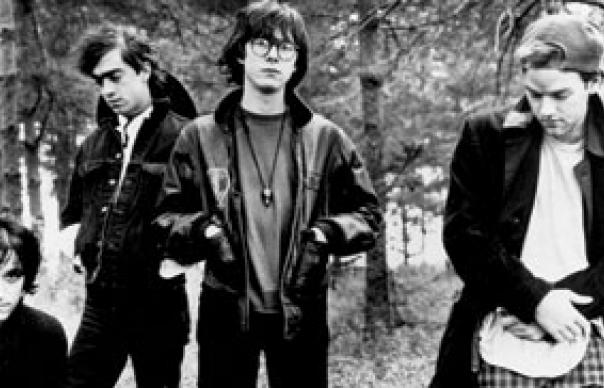 “Over the years a certain misapp-rehension about Fables Of The Reconstruction has built up,” Peter Buck writes in his sleeve notes for the two-CD anniversary edition of REM’s third album. “For some reason,” he continues, “people have the impression that the members of REM don’t like the record. Nothing,” he hastens to add, “could be further from the truth.”

This might well be the case and the album may indeed be the personal favourite Buck now claims it to be. It nevertheless still occupies a curious place in REM’s storied history, forever overshadowed by the two landmark albums that preceded it and many of the records that followed, that great run of albums that climaxed with Automatic For The People in 1992.

It’s perhaps as much as anything else the apparently unhappy circumstances of its making that shaped the group’s somewhat jaundiced view of it. Michael Stipe’s first choice as producer was Van Dyke Parks, he told me when I spent four days with REM in Athens just before Fables’ release in June 1985. The year before, Parks had released Jump, an album based on the Uncle Remus folk tales popular in the post-Reconstruction Southern American states. Stipe thought Parks would be therefore sympathetic to the new songs he’d been writing, most of which were emerging as evocative vignettes drawing on the story-telling traditions of the Deep South, a palpable air about them of rural fable. He’d been listening, he told me, to a lot of Appalachian folk songs, field recordings, become fascinated by the oral tradition of legends being passed down from generation to generation.

This notion would form the conceptual hub of the record REM would eventually record. But in the meantime, they passed on Parks. Elliot Mazer, who’d produced Neil Young’s Harvest, was briefly considered, as was Hugh Padgham, best known for his work with Phil Collins, The Police and Genesis. According to Bill Berry, Elvis Costello was desperate to produce them and was a serious contender before long-running friction between his manager Jake Riviera and REM’s then-label boss Miles Copeland ruled him out.

The gig eventually went to Joe Boyd, the choice of Peter Buck, a long-time fan of the producer’s work with Nick Drake, Fairport Convention and Richard Thompson, one of Buck’s great musical heroes. Buck, when we spoke in 1985, remembered Boyd arriving in Athens on a Monday, attending a session on the Tuesday where in four hours at Jim Hawkins’ Boulevard Garage Studio they recorded – live, with minimal overdubs – 14 of their new songs. They included the 11 that made the final cut, plus a version of “Hyena”, which would turn up on their fourth album, Life’s Rich Pageant, and two additional tracks, “Bandwagon” and “Throw Those Trolls Away”, all of which are officially released for the first time as The Athens Demos, the second CD of the new deluxe edition. The following day, Wednesday, Boyd was confirmed as producer. By the Friday, at the producer’s suggestion, REM were on their way to London to record Fables Of The Reconstruction at Boyd’s north London studio.

As they have reminded us regularly since, they had a grim time. It was winter, they had a long daily commute from their Mayfair digs to Wood Green and the weather was lousy. “It rained every day it wasn’t snowing,” Buck told me in 1985 and is still moaning about it in the sleevenotes here. Boyd recently recalled in Uncut that he found the band grumpy going on miserable throughout the sessions and there was further tension between him and the group about his painstaking approach. They’d been used to a more freewheeling studio atmosphere when they worked with Mitch Easter and Don Dixon on Murmur and Reckoning. Stipe admitted to me a particular frustration with Boyd’s meticulous perfectionism, the hours he spent mixing and re-mixing, which militated against the raw spontaneity he had originally envisaged for the album.

In popular opinion, the band’s original intentions for the record were thus compromised by a producer they liked but weren’t happy with and the grim English weather, a mix that is somehow thought to have infused this album with an atmosphere of unanswerable gloom. Buck himself now describes it as “a doomy, psycho record, dense and atmospheric”. It’s a point of view, I guess. But Fables Of The Reconstruction doesn’t to any great respect sound to me doom-laden, fatally overcast or especially glum. There are fraught moments like the hallucinatory “Feeling Gravity’s Pull”, slightly sinister “Old Man Kensey” and piercing “Auctioneer (Another Engine)” and there are hymns to a vanishing America like impressionistic travelogue “Driver 8” and the noble “Wendell Gee” that are not without a certain sadness. But elsewhere Fables’ contains some of REM’s most gorgeous and uplifting music, including “Maps And Legends” (which with added mandolin could have been the hit “Losing My Religion” became) and the gorgeous “Green Grow The Rushes” (which hints at the increased politicisation of Stipe’s songwriting on Document). “Life And How To Live It” and the horn-laden “Can’t Get There From Here”, meanwhile, are among the hardest-driving songs in their expansive repertoire, wholly exuberant.

It’s fascinating, too, listening to these songs as they were demoed at Boulevard Garage Studios. Buck claims that after Murmur and Reckoning, REM had run out of songs and with the recording deadline looming had only written “Driver 8” and “Old Man Kensey”. He suggests, remarkably, that virtually the whole of the record was written and rehearsed in three weeks. It’s further remarkable how fully formed the songs were at the demo stage.

Boyd seems to have altered very little about them in the final recording process, adding strings to “Feeling Gravity’s Pull” and horns to “Can’t Get There From Here”, but otherwise not messing with them at all. Things you thought must have been cooked up during the sessions in London with Boyd – Buck’s guitar intro to “Feeling Gravity’s Pull”, for instance, and all manner of felicitous instrumental touches and vocal harmonies – are already in place, waiting only for the amber glow Boyd would bring to them.
Allan Jones