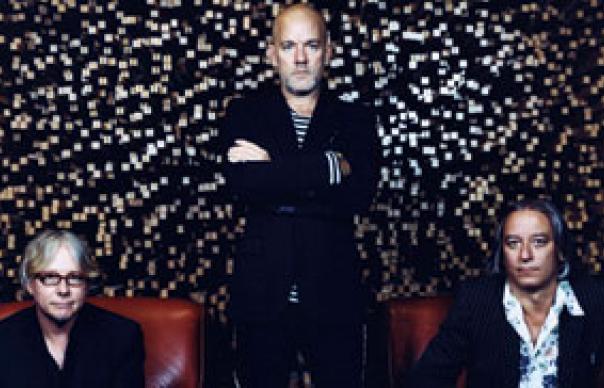 As recently as three years ago, it looked like REM were done. The first certifiably poor record of their astonishing career, 2004’s Around The Sun had been followed by an unenthralling tour, and a lengthy period of sulky silence, during which REM’s three remaining members admitted that, during the gestation of Around The Sun, they’d pretty much ceased speaking to each other.

2008’s brash, punky Accelerate, a wilful and hearty tug on their garage band roots, was immense fun, but rather felt like the old gang getting back together for one last job, determined not to bow out on a low note. There still seemed very little likelihood that REM were going to be REM, as we’d come to understand the idea, again.

Collapse Into Now, REM’s 15th studio album, finds them at least trying to be exactly that, and not infrequently succeeding, though the struggle with the syndrome of diminishing returns must be at least as arduous for the band as it is for the listener. Nobody, surely REM least of all, expects them to reconquer the heights they commanded between 1983’s Murmur and 1992’s Automatic For The People, an eight-album sequence of near flawlessness and incalculable influence. Set in that context Collapse Into Now can only sound like an afterthought, but it is nevertheless one which bristles and fizzes with invigorating quantities of wit and fury.

Two defining lines, laced with gleeful self-mockery, lurk in the terrific second track, raging rock’n’roll jams-kicker “All The Best”. “It’s just like me to overstay my welcome” is one. “I’ll show the kids how to do it” is the other.

Collapse Into Now was produced by Jacknife Lee, who presided over Accelerate, and recorded in Berlin’s Hansa studios, birthplace of David Bowie’s “Heroes”, Iggy Pop’s Lust For Life and perhaps more significantly, for a somewhat becalmed rock leviathan seeking a renewed sense of purpose, U2’s Achtung Baby. Collapse Into Now will neither define a moment nor redefine a career, but it flourishes a few worthwhile reminders of REM’s singular capabilities. “Mine Smell Like Honey” is swaggering boogie in the “Bad Day”/”End Of The World As We Know It” mould, borne aloft, as so many great REM moments have been, by Mike Mills’ harmonies. Opening track “Discoverer” summons memories of the baleful stadium rock of “Green”, Buck recycling the purposeful, shuddering guitar of “Turn You Inside Out”.

Where Accelerate was an explicit exercise in REM brushing the grey out of their whiskers and reconnecting with the adolescent joy of rattling the garage walls, Collapse Into Now sees REM permitting themselves a return to their traditionally wider sonic palette (it does share with its predecessor a determination to get on with things – the 12 tracks consume just 41 minutes). Guest stars are invited along – Pearl Jam’s Eddie Vedder on the sweet country shuffle “It Happened Today”, Peaches and Lenny Kaye on the exuberantly daft thrash “Alligator Aviator Autopilot Antimatter”. The acoustic guitars and mandolins – as well as accordions and other accoutrements of REM’s backporch-strummers mode – are retrieved from the attic for the likes of “Uberlin”, “Oh My Heart” and “Me, Marlon Brando, Marlon Brando And I”, each eloquent studies in the gothic folk previously heard on the more introspective moments of Out Of Time. The closing track, “Blue”, is a sonorous, sprawling and altogether seductive dirge, Stipe’s distorted, distracted spoken monologue counterpointed by the backing vocals of Patti Smith.

It says everything about REM’s stature at this point that it’s really only possible to define and describe their new album by referring to their old albums: they’re one of those rare acts who’ve become a genre unto themselves. Collapse Into Now is doomed, as all post-Automatic For The People REM albums are doomed, to spend its life in mighty shadows, but it sparkles and twinkles nonetheless.
Andrew Mueller

Q+A PETER BUCK AND MIKE MILLS
UNCUT: This is a more expansive record than Accelerate.
MIKE MILLS: We didn’t try and limit ourselves to any type of song on this one, we just picked the best we had. It runs the gamut from pretty loud and fast to slow and beautiful. We tried to get most of the songs in two or three takes.
PETER BUCK: In recent years it’s felt like my job in REM is to keep things moving, to work quickly and keep everyone working with an edge so it’s spontaneous. Some of the material this time sounds very emotional.

Is there a deeper meaning to the LP title?
PB: Someone in the studio asked Patti Smith what we should call it. She looked at Michael’s notes and said: “What about ‘Collapse Into Now?’,” which is a line from “Blue”. From Michael’s lyrics, it sort of feels like the way we run everything. It’s kind of ramshackle.
MM: Today is a very immediate time, we’re all used to immediate gratification, knowledge and availability. Past and future matter less, as everyone’s focused on the moment. We weren’t thinking about that when we chose the title, but looking back it makes sense. It’s a record that fits the time in which we live.
INTERVIEW: ROB HUGHES