RADIOHEAD – THE KING OF LIMBS

Thom Yorke and co bring timely, retro magic to their latest releaseThe most enjoyable consequence of Radiohead’s post-EMI mode of operation has been their re-enchantment of the album release. The King Of Limbs was announced on a Valentine’s Monday morning and released for download the following Friday. In between was a five-day festival of guesswork, fabulation and YouTube comedy. It’s as close as rock comes these days to the anticipation we more often associate with a cup final or an announcement from Steve Jobs. 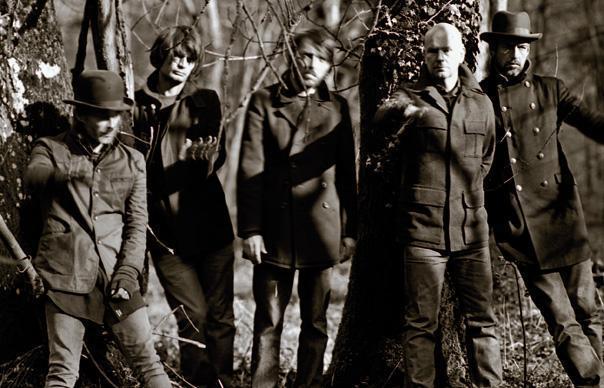 Thom Yorke and co bring timely, retro magic to their latest releaseThe most enjoyable consequence of Radiohead’s post-EMI mode of operation has been their re-enchantment of the album release. The King Of Limbs was announced on a Valentine’s Monday morning and released for download the following Friday. In between was a five-day festival of guesswork, fabulation and YouTube comedy. It’s as close as rock comes these days to the anticipation we more often associate with a cup final or an announcement from Steve Jobs.

Titling the album after an ancient Wiltshire pollarded oak, with a cover depicting some Miyazaki forest spirit/Pacman hungry ghost, were Radiohead plunging a wyrd taproot into psilocybic folk? Did the sporadic playlists blogged on the band’s website suggest a dubstep direction? Did the video for “Lotus Flower”, featuring Thom Yorke’s uncanny writhing, indicate some brain-bending departure into mutant dance-pop?

The downside to this frenzy of speculation is, maybe inevitably, that once you’ve downloaded your mp3s and impatiently previewed tracks through laptop speakers, the actual music might feel like an anticlimax. Weren’t Radiohead supposed to be redefining rock for the post-material age? If In Rainbows surprised with its relative conventionality, then The King Of Limbs seems to have reverted even further to some mid-’70s platonic ideal of the LP. The eight tracks, lasting 37 minutes, would comfortably sit on one side of a C90. Even the running order, dividing into a rocking side and a dreamy side, seems to long for the days of vinyl.

But this concision brings welcome freshness. If post-Kid A albums often seemed to be intent on redefining difficult listening, and the gestation of In Rainbows was by all accounts tortuous, The King Of Limbs passes like a breeze, and has you skipping back to the start as soon as the final track fades out. Not that any of this is ‘light music’, necessarily. “Bloom” clatters in, a rattling drum sample, a locked loop of piano, while Yorke croons of jellyfish and giant turtles and clouds of astral jazz loom into view. It feels like an English answer to Philip Glass’ teeming Koyaanisqatsi or Debussy gone dubstep.

“Morning Mr Magpie” is the first sign of guitars, but they’re noticeably clipped, leashed, weaving a taut mesh of Can-ned, neurotic funk. It’s clearer than ever what a superb band Radiohead have become, one who have learned to graft the programmed precision of digital rhythms into the organic matter of their own drums and bass.

“Little By Little” follows one of their signature serpentine melodic lines through showers of zither, but the song suggests that if there’s a weakness to The King Of Limbs it’s lyrical. The song breaks down to a middle eight, where Yorke wearily wails “Obligations/Complications/Routines and schedules/A job that’s killing you…”, as though he’s still running through the shopping list of late-capitalist ennui he began on “Fitter Happier” in 1997. Throughout the album Yorke slurs and mutters through lyrics that are impressionistic at best, and as a result the album feels sketchier than it actually is. It’s telling that “Feral”, one of the album highlights, is practically instrumental, with murmurs and moans scattered over a track that wouldn’t be out of place on a Four Tet or Caribou album.

“Lotus Flower”, released on YouTube ahead of the album, is effectively the lead single and as such might be the best standalone track the band have release since “Paranoid Android”. Yorke recovers his falsetto grace and as he sings “slowly we unfurl like lotus flowers bloom”, the band themselves seem to be finding limber new life in old muscles, stretching awake like a cat in a pool of sun.

“Codex” and “Giving Up The Ghost” are closest to the type of pastoral the title and artwork first suggested – the former an eerie piano dirge, buzzed by dragonflies and gloaming strings, the later a kind of spooked, looped Neil Young ballad. Their tranquillity sets the stage for “Separator”, what you might call ‘hynopompic’ rock – Yorke waking from a “long and vivid dream” of fruits and flowers and giant birds, bringing the album to a close just as the band, and the guitars in particular, seem to be flourishing, raring to get going. “If you think this is over then you’re wrong” he sings, and many have taken this as a promise of imminent sequels, explaining what some have taken as the album’s otherwise unaccountable brevity.

The King Of Limbs feels timely – released just as the country protested the privatisation of its own forests, but also in tune with the turn of the year, buzzing with fresh life right on the cusp of the vernal equinox. Radiohead’s in-house artist, Stanley Donwood, has talked of getting embarrassed with the doorstop-monument physical release of In Rainbows, and of opting for something more ephemeral, even topical, with the newspaper-style new package. This feels suggestive; you could imagine a musical future on the lines of magazine subscription: The Radiohead Quarterly. Who wouldn’t relish breaking out of the titanic album cycles of the recording industry – four years from recording through release, promotion and touring – into a nimbler, seasonal approach? If The King of Limbs really is the just a first instalment, Radiohead’s spring collection, then summer can’t come soon enough.