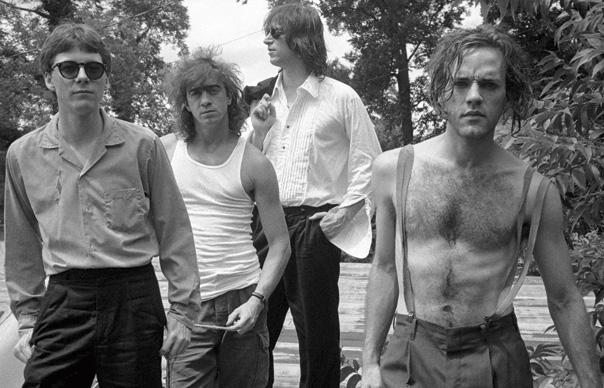 “I don’t know if I have any commercial expectations for this one at all,” Peter Buck told Rolling Stone prior to the release of R.E.M.’s fifth album. “I don’t see this as the record that’s going to blast apart the chart. Although you never know. Weirder things have happened.”

Indeed. If 1986’s Lifes Rich Pageant had marked the beginnings of R.E.M.’s emergence from their cocoon of indie diffidence, 1987’s Document was where they first properly reconciled themselves to their destiny as the only group of the 1980s American college-rock milieu to graduate to stadiums, and stay there. This remastered 25th anniversary double-CD edition of “Document” – also available in 180-gram vinyl – is packaged with a complete concert, recorded on the subsequent “Work” tour on September 14th, 1987, at Utrecht’s Musiekcentrum Vredenberg: the previously unreleased show just about triumphs over a tinny, clattering sound, amounting to a twenty-track Greatest Hits of R.E.M.’s pre-Warners period. The Dutch crowd, clearly still unfamiliar with the new work, don’t quite hit their cue on the “Leonard Bernstein!” exclamation, but are properly hushed for the mournful, half-paced closer of “So. Central Rain”.

For all Buck’s pre-release expectation-lowering vis-a-vis Document, it is barely conceivable that the man who’d just recorded the guitars on “The One I Love”, which sounded like a Byrds song played by U2, was entirely astonished when Document went swiftly platinum (Buck would have had cause, however, to be baffled when “The One I Love” became a popular wedding tune, hopefully only among couples who hadn’t quite heard the bit about “A simple prop/To occupy my time”).

Document was appropriately titled. It was, fairly straightforwardly – in conception if not execution – intended as R.E.M.’s state-of-the-nation address. Given that the nation whose state R.E.M. were addressing was the piously purse-lipped yet triumphally patriotic United States which had been dominated for seven years by Ronald Reagan, it does R.E.M. considerable credit – though the United States possibly less so – that Document has weathered a quarter century so well. Some of the praise for this should be directed towards producer Scott Litt, beginning a long association with the band. Litt disdained most of the defining sonic tropes of the late 1980s – although a suspicion that Mike Mills applies his thumb to the bass in the coda of “Finest Worksong” cannot be ruled out.

Document mostly endures, however, because R.E.M. resisted the temptation which often overwhelms the youngish and politically agitated: at no point did Document seize by the lapels and rant, instead making its points with an obliqueness that verged on the Dada. The elegiac “Fireplace” reacted to the “Crazy crazy world” and these “crazy crazy times” by commanding “Clear the floor to dance”. Wire’s “Strange”, rendered even more fidgety and frenetic than the original, was recalibrated as the inchoate indignantion of someone slowly figuring out that the world isn’t fair (the line “There’s something going on that’s not quite right” could have been an alternative title of the album). “It’s The End Of The World As We Know It (And I Feel Fine)” was (thirteen years early) a 21st century “Subterranean Homesick Blues”, a playful and deliriously jumbled portent of apocalypse.

Even when Document was relatively obvious, the emphasis was firmly on the “relatively”. “Welcome To The Occupation” was a hazy survey of the same Central American frontlines previously depicted on “Flowers Of Guatemala” and “Green Grow The Rushes”. The jaunty “Exhuming McCarthy” – a template for the subsequent “Stand” and “Pop Song 89”, more of what Buck once defined as R.E.M.’s “vampire surf guitar funk” – invoked Senator Joe McCarthy, the demented Wisconsonian witchhunter of the 1950s, as the eternal bogeyman of R.E.M.’s fellow fretfully paranoid liberals. The sample of US Army counsel Joseph Welch’s famous rebuke to McCarthy – “Have you no sense of decency, Sir?” – was, in this context, another iteration of the question asked of America by generations of protest singers, in whose ranks R.E.M. had formally, if hesitantly, enlisted themselves.