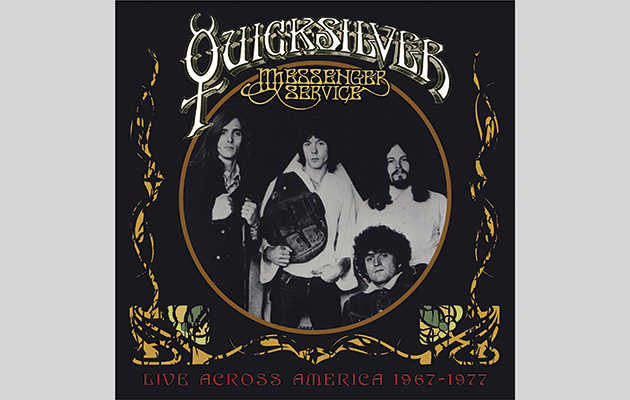 Quicksilver Messenger Service’s eight-syllable name crackled with Old West mythology and looked sensational on psychedelic posters. They were utopian and badass, visionaries of the voodoo blues, stretching the Bo Diddley beat to the cosmos (or at least to 28 minutes) with their acid-rock extemporisation on “Who Do You Love?” Their unique selling point was their guitarist John Cipollina, whose unmistakable sound was arrow-like in its penetration and giddy with vibrato. But their singer, Dino Valenti, is still criticised on internet forums more than 20 years after his death, accused of wrecking a great band in the name of ego. Quicksilver, they say, ought to have joined the Airplane and the Dead in the top tier of San Francisco groups. What went wrong? What went right?

Spanning a decade of live performance, this 5CD boxset exposes some of the strengths, weaknesses and internal power shifts that characterised Quicksilver’s 14-year career, with Valenti cast as both hero and villain. The contents – four gigs from 1967, 1970, 1976 and 1977, and a rehearsal from 197o – sadly omit anything from 1968 (the year they recorded their best album, the psych-blues classic Happy Trails), but the inclusion of a February ’67 Fillmore concert allows us to hear Quicksilver in the period following the Human Be-In, the headline-grabbing event in Golden Gate Park on January 14 that established San Francisco as the emerging epicentre of the counterculture.

Opening for Jefferson Airplane, Quicksilver warm up the audience with some enthusiastic R’n’B covers, some gutsy rock’n’roll and one or two extended jams that give Cipollina a chance to cut loose. Among the highlights are the nine-minute “Year Of The Outrage”, a politically charged two-chord vamp featuring the growling vocals of the Electric Flag’s Nick Gravenites; and Robert Johnson’s “Walkin’ Blues”, which Quicksilver work up into a strange but effective arrangement that sounds a bit like Captain Beefheart and his Magic Band playing a tango. Valenti, who’d recently served a prison sentence for drug offences, sits in with Quicksilver for two numbers, but was not yet an official member. Originally from Connecticut, he was a folk singer who wrote songs prolifically. One of them, a hippie anthem called “Get Together”, would be a US Top 5 hit for The Youngbloods in 1969.

Live Across America leaps forward three years for its next gig – in Hawaii on June 13, 1970 – and we can see that much has changed in the meantime. Valenti’s arrival at the end of ’69 has done more than just augment the personnel. He’s taken over as lead singer and is now writing the bulk of Quicksilver’s material. “Fresh Air”, a pro-marijuana, pro-LSD song that became their nightly set-opener, provided important continuity with the psychedelicised Quicksilver lineups of ’67-’68, but other Valenti tunes were sappy and saccharine compared to the Bo Diddley marathons of Happy Trails, wherein Cipollina and second guitarist Duncan wowed fans with their rotating solos and symbiotic interplay.

Valenti’s presence notwithstanding, the 1970 Hawaii gig affords many opportunities to hear what made Quicksilver such a special outfit. Cipollina, thin and cadaverous, looking like a member of Loop 20 years before they existed, plays some gorgeous fills in his idiosyncratic finger-picking style, decorating each note with a flourish of his Bigsby tremolo arm – a magical sound – and swapping lead and rhythm roles constantly with Duncan on the other side of the stage. “The Hat”, Quicksilver’s new two-chord vamp, is like a three-way meeting of Donovan’s “Season Of The Witch”, Neil Young & Crazy Horse’s “Down By The River” and The Velvet Underground’s 1969: Live version of “I’m Waiting For The Man”. Uncannier still is Quicksilver’s instrumental “Edward, The Mad Shirt Grinder” – a showcase for English pianist Nicky Hopkins, a band member since the previous summer – which sees Cipollina and Duncan mutate into Southern rockers, harmonising like Duane Allman and Dickey Betts for several wonderful minutes. Throughout the show, Quicksilver have a raggedness, an enjoyable looseness that’s lacking from the two studio albums they made in Hawaii that year (Just For Love and What About Me), as if Valenti’s songs on this particular evening are viewed by the rest of the band as vague outlines encouraging maximum improvisation, rather than inflexible templates offering minimum leeway. The boxset’s fifth disc, taped at a rehearsal the week before, is even more exploratory. Dominated by a menacing Cipollina riff (“Cobra”), it’s the sound of Link Wray practising his psychedelic scales. Listen closely to the conversations between songs, though, and you can hear a band on borrowed time. Valenti seems contemptuous of almost everything Cipollina plays.

Cipollina and Hopkins left in 1971, and bassist David Freiberg soon followed them out the door. Valenti had wrested control, but of what? The third and fourth gigs on Live Across America, from 1976 and ’77, are lessons in Valenti stagecraft, be it his creaky patter (“Are there any lovers in the house?”) or his strained notes sung in his acquired-taste hillbilly twang. The once-cosmic Quicksilver were getting dangerously close to being an above-average bar band. Musically, the emphasis shifted to Duncan, always the dark horse of the band, who now played all the guitar solos by himself. Disc Four – Quicksilver at the Quarter Note in New Orleans on July 26, 1977 – witnesses a particularly impressive Duncan performance as he pours out cascades of notes in a pealing tone similar to Carlos Santana. But Valenti has become a serious irritant, his stage announcements near-identical to the year before.

Quicksilver disbanded in 1979, incongruous and forgotten, a long way from the Fillmores and Avalons where they’d defined their identity. By all means investigate Live Across America as a well-recorded anthology of their roadwork, but new listeners should hear Happy Trails (and their self-titled 1968 debut) first. With hindsight, Cipollina, Duncan and Valenti were simply too complicated and counterproductive a trio of people to have long-term artistic mileage together, which is a pity because Cipollina’s departure was a huge blow to Quicksilver. The guitar ace died in 1989, aged only 45, five years before Valenti’s death at 57. Duncan gradually moved into jazz, releasing a four-volume series entitled Shape Shifter in the ’90s. They’re worth seeking out. The one-time second guitarist has finally stepped out of the shadows of Valenti and Cipollina. In many respects, Live Across America is Duncan’s journey as much as Quicksilver’s.

Q&A
GARY DUNCAN (guitar, vocals)
The first gig in the boxset comes from the Fillmore in February 1967, just as San Francisco’s music scene was exploding. What do you remember of that time?
It was a bunch of kids running around in the park and going to the Fillmore and the Avalon and getting stoned. Everybody was taking LSD – lots of LSD. When I first started coming to San Francisco, there weren’t any hippies in those days, it was beatniks. It wasn’t about peace and love, it was about understanding life on an intellectual level. The hippies didn’t have much of an intellectual view of things. Most of them were kids who ran away from home and came to San Francisco because they didn’t want to work or go to college. They wanted to live together and eat brown rice and get screwed. But whereas the beatniks had been a black-and-white generation, the hippies, because of LSD, they had Technicolor.

What kind of band did Quicksilver Messenger Service see themselves as?
We weren’t your typical folk-rock band. We played blues, R’n’B, rock’n’roll… and yes, a few folk songs. We weren’t ambitious to make it big in the music business or anything. We just wanted to play. We wanted to make enough money to pay the rent and have some pot to smoke. We played really loud and we had a groove. If you wanted to dance, you could dance to us. The major difference between us, the Airplane and the Dead was that we had the best rhythm section in the city.

How did the two-guitar interplay between you and John Cipollina come about?
In the beginning it was just John. I was mostly the singer when the band started. Then our manager heard me playing one day and said, “Hey, you play guitar. We can have two guitars.” John and I were opposite types of character and opposite types of player, so we fitted together well because we didn’t sound the same. But I’d played guitar before Quicksilver. I had a little band when I got back from Vietnam.

You were in Vietnam?
I was there in ’62 and ’63. I was a sniper with the 75th Airborne. I was there for a year and I got back right before Kennedy was assassinated. Up until that point, there wasn’t really what you’d call a Vietnam War. It was just seen as something going on in Southeast Asia.

By ’67, though, you must have been surrounded by people who were terrified of being drafted. Did they know you’d already been out there?
I never talked to anybody about it. That wasn’t a real popular subject in San Francisco. If I’d started telling everyone, “Well, I used to be a sniper in Vietnam and I killed 27 people,” I wouldn’t have been allowed in the band. Later on, I found myself being a little ostracised from the musical community because I rode motorcycles and I had guns. Most of my best friends were in the Hells Angels. I never found musicians to be particularly reliable or trustworthy, but I always knew I could rely on the Hells Angels. You know, I grew up with people from Oklahoma who believed that men should be men, and then I was in the military and so was my father, and so the bonding of brotherhood – that whole aspect of life – has always been really comforting to me.

And yet, ironically, your singer Dino Valenti wrote one of the ultimate hippie songs, “Get Together”, a tribute to peace, love and flower power. What was Valenti like?
Dino was born and raised on a carnival. He was a carny. He hustled everything and everybody – it was in his nature, he couldn’t help it. He and I were partners for ten years, and in that time he got the reputation of being an egotist, which he was, and a narcissist, which he was, and a brutal person who did bad things to people. But when you got to know him, you realised that he was actually just a guy of simple intelligence who did a lot of stupid things. Dino had plenty of opportunities to do well in the business – he got signed to Epic [in 1968] by Clive Davis – but his album failed, and when they re-did it, that failed too. He was so obnoxious to deal with that nobody wanted anything to do with him.

The boxset ends in 1977, by which time San Francisco bands like Santana, Jefferson Starship and the Steve Miller Band were having huge success. Did Quicksilver never try to write a commercial album, or come up with a song that would appeal to AM radio?
We just never had it. “Fresh Air” [US #49 in 1970] was probably the biggest hit we had, but Capitol Records were notorious for not promoting their acts. From the bean counters’ point of view, they figured we were going to sell a certain amount of records every year no matter what, and they didn’t care if we became a household name or not. That was always the problem we had with Capitol. I guess that’s why it never happened for us.
INTERVIEW: DAVID CAVANAGH