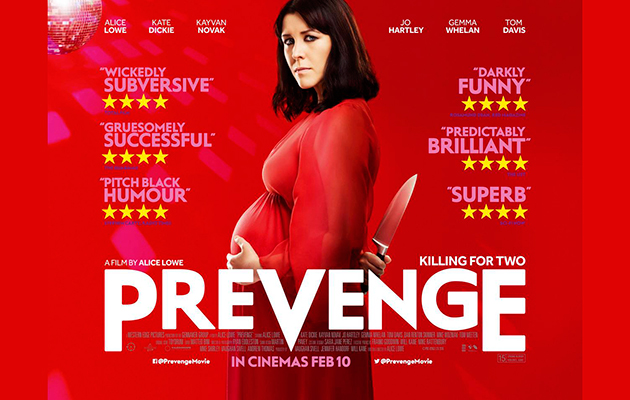 At the end of Sightseers – the grisly, humourous film Alice Lowe and co-star Steve Oram made for Ben Wheatley – we left Lowe standing on the Ribblehead Viaduct. When Prevenge opens, we once again meet Lowe in a vertiginous, exposed location: on Beachy Head. What unfolds in flashback is a story every bit as black as Sightseers – but Prevenge is a more ghoulish and overtly violent film. There are no whimsical detours to the Keswick Pencil Museum here.

In Prevenge – which Lowe also wrote and directed while she was seven months pregnant – she plays Ruth, a single mother-to-be who believes that her baby is telling her to kill people. “People think that babies are sweet, but I’m bitter,” her little bundle of joy tells her in its icky, sing-song baby voice.

A Cambridge graduate alongside David Mitchell, Robert Webb and Richard Ayoade, Lowe has been working for years principally in TV comedy – Garth Marenghi’s Darkplace, The Mighty Boosh, Horrible Histories – but also in live comedy, where she met Steve Oram. The pair spent seven years working on the characters that eventually fed into Sightseers. Since then, she starred in Black Mountain Poets as a con artist on the run who hides out at a literary retreat in Wales.

Prevenge, then, is a major step up for Lowe. She finds dark humour in the condescending advice dished out by a midwife (“Baby will tell you what to do… baby knows best”) but behind the film’s barrage of macabre assaults, there is a strangely moving portrait of a woman discombobulated by her condition. Indeed, we gradually discover the circumstances behind the absence of the baby’s father; it is clear that Ruth is burdened by more than her fair share of grief. The bumpy synth score recalls ‘70s slasher films and helps underscore the tension between the drabness of the film’s suburban setting and the brutality of what takes place there.