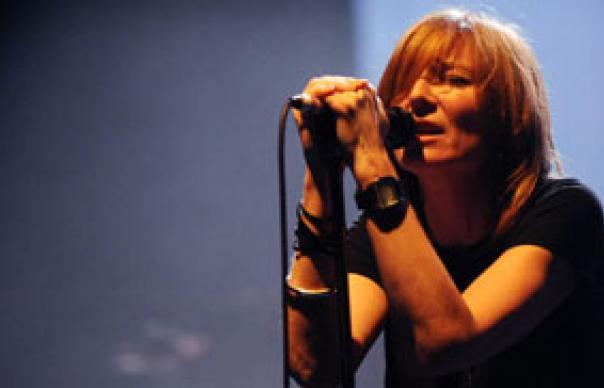 When Geoff Barrow sparked a minor spat with Mark Ronson last summer, marvelling at the man’s ability to “turn decent songs into shit funky supermarket muzak”, it wasn’t hard to detect a certain reflexive disgust – a feeling only compounded when you delved further into the Portishead Myspace, and found the observation that “music like Dummy is being used to sell relaxation courses, and that makes me sick to the guts”.

You can see Barrow’s point: It’s hard to think of any recent musical style that’s suffered such a sharp plunge in its critical stock as trip hop – from adventurous British mash of blues and breakbeats to innocuous chill-out compilations in the space of a couple of series of This Life. More galling still, particularly for an old b-boy like Barrow, it was only when the genre reached its most absolutely anodyne – Dido – that it actually fed back into mainstream US hip hop, via Eminem’s “Stan”.

An alternative, but no less insidious, fate may be the respectability accorded the elder statesman. 2008 is being heralded as the second coming of the Bristol scene, with new albums from Tricky, and fellow travellers Goldfrapp, and Massive Attack curating the Southbank’s Meltdown Festival – a sign of that the cultural establishment think you reliable enough not to freak out the patrons of the Royal Festival Hall too much. In a sense, it’s the dinner party soundtrack writ large.

The first indication that Portishead might elude both fates came with their own Nightmare Before Christmas festival last year. The combination of defiantly bleak venue (a Minehead holiday camp in the dark heart of December) and brilliantly esoteric line-up (from the the pioneering electronica of Silver Apples and the sepulchral folk of Hawk and Hacksaw, to the cosmic metal of Sunn O))), via the sadistic wit of Jerry Sadowitz), proved sufficiently traumatic to send at least one music editor fleeing after a single evening.

Barrow has claimed that the bands they invited to play were simply the ones that had inspired them to make Third – and amazingly it’s not only true, but it works magnificently. If the first incarnation of Portishead was Lynchian neo-noir, a series of haunted dancehalls and guttering torch songs, now they’ve evolved into a kind of sci-fi horror. If Third were a movie it would be something like Children Of Men: an all too plausible world of everyday horror, random brutality, burnt-out cities and bleakly creepy countryside.

Lead single “Machine Gun”, makes this new mood most vivid. The brutal beat recalls an earlier Bristol sound: the industrial hip hop of Mark Stewart’s Mafia and Tackhead – and beyond that, the sci-synth soundtracks of John Carpenter. Barrow also seems to have fallen for the very different grain of the early Fairlight sampler. Yet against this punishing rhythm Beth Gibbons sings the kind of eerily beautiful, desolate song that wouldn’t seem out of place on an early Anne Briggs recording.
Where once she was a mercurial, shapeshifting frontwoman, slipping in and out of masks of torchsong temptresses, on Third Gibbons mostly sticks to this one voice – beyond pastiche or persona, a bracing clear cold stream of English folk, that she first explored on her sublime 2002 Rustin Man collection. But it never sounds quaint. Indeed something about Third reminds me of Tim Buckley‘s Starsailor – a lucid dream of a possible future folk, some cosmic deep-song.

Just as on Starsailor “Moulin Rouge” is an oddly innocent interlude, Third has “Deep Waters”, a simple ukulele shanty, sung by a shipwrecked soul, backed by what sounds like a Zombie barbershop quartet. But it’s a rare moment of light. More characteristic is “Silence”, opening the album with chase-scene urgency (Barrow says it was inspired by the idea of James Brown playing at the Rumble in the Jungle in Zaire, 1974), before Gibbons strikes her keynote of implacable grief: “Empty in our hearts / crying out in silence… / Did you know what I lost? / Did you know what I wanted?”.

Adrian Utley proves to be the key player through much of the record. Where once he was the model of session man discretion and style, picking out lines as elegant as Morricone, here his playing is frequently awe-inspiring. “Plastic” is one of a couple of songs that could have appeared on the earlier records, but it’s capsized by a huge wail of distorted guitar roaring out of the middle of the track, of the kind that generally appears on Scott Walker’s recent records. Throughout Utley seems to have picked up the thrilling discordance that Johnny Greenwood has lately channeled out of Radiohead and into his soundtracks.

This howl is tempered by the clunking funk of primitive electronica, a kind of disturbed cousin to Broadcast’s radiophonic lullabies. “We Carry On” blatantly borrows from the Silver Apples’s “Oscillations”, but in place of their machines of loving grace, the Moogs feel martial as Gibbons sings with halting, hunted urgency: “the pace of time – I can’t survive/ It’s grinding down the view… / breaking out – which way to choose? / a choice – I can’t refuse” . It’s awesome and faintly terrifying, like one of Emily Dickinson’s more kosmiche moments.

The opening moments of the record feature a crackling sample of some character from an old Brazilian film, a speech which translate as advice to “Beware the rule of three”. This could have been a witty, self-deprecating disclaimer, warning of typical third album creative bankruptcy. Instead it provides fair warning that Third is the most stunning, stark and superb Portishead album yet.


UP CLOSE AND PERSONAL: GEOFF BARROW

It’s been ten years since your last LP…

We finished the last tour in 1998 fairly broken people. We’re not made for the excesses of the rock ‘n’ roll lifestyle. At that time The Verve had just split up, so were headlining all the European festivals. We were a studio band with fairly strange sound issues playing to 55,000 people. It all went down incredibly well. But there was loads of personal stuff going on behind the scenes, which was just horrible. We had all kinds of divorces and illnesses…Personally I quit music for about four years.

But what it came down to is that there’s never any point in releasing a record if you’ve got nothing to say, and at that point we were running on empty. We had to go out and live a little bit, rebuild our personal lives and get the drive to think we were doing something forward thinking. Adrian and Beth went off and did other things: Beth made her own record, of course, and Adrian did some soundtrack stuff. I escaped. I ran to Australia. In 2001 Adrian and I went to record some Portishead material in Sydney in a mate’s studio for seven weeks – but it just didn’t feel right. It didn’t feel like we were breaking any new ground.

So when did things start coming together for the new album?

Not until 2003, when I wrote “Magic Doors”. I wrote it, Beth sang on it, and it was the first time we thought “Oh, this is actually all right” you know what I mean? Basically, we have a policy which is one step forward, eight steps back. We’ve never felt any pressure from outside, it’s all internal – there’s a lot of self-doubt in Portishead. In 2006 we had a meeting with our record company, because our A and R guy went to run Virgin. So we thought we’d better go and meet whoever was left. So we went to meet the MD, and we played him seven tracks. We went back a year later and we had six tracks, because we’d dropped one and were just about to drop another three. If we didn’t have to work this way, we wouldn’t, believe me.

Where have the new ones come from?

Once we get on a roll, it’s OK – we wrote five or six tracks in six months. What happens is we write an idea, say a guitar and vocal, and that could sit on the shelf for three years. It gets pulled down every now and then, and I’ll have a tinker with it, and then get really depressed because I can’t come up with anything, a formula. We have this saying, “It’s all right to have a song. But where does it actually live?” Like, in what atmosphere does it live in?

There are a lot of pretty heavy jams on this album. Some krautrocky moments, the Silver Apples…

They’re not jams, though…there’s no happy mistakes. I’d love to be the sort of band that goes in, jams the hell out of something and then just chops it up, like Can. But we’re just two people. It’s me and Ade staring at each other, going, “Well, who’s going to be Damo?”. I run a label in Bristol now (Invada), and I’ve been exposed to quite a lot of heavy music over the past few years, like Om. Maybe it’s not apparent that we’re into that kind of stuff on the record, but about two or three years ago I had an experience. I’d been in the music industry since I was 19, but I went to an OM gig, and it was like seeing Public Enemy when I was a teenager. It was that uncompromising kind of sound.

Tell me a bit more about the roles in the group. When does Beth Gibbons come into the process?

It’s changed a little bit over the years, because these days Beth will come in with a whole song or a guitar riff. Obviously, we’ve worked with Beth for years so it just sounds like Beth – but with this album it sounds like a frustration with society has crept into things this time, rather than personal frustration. The main thing for us was to not repeat ourselves, but still maintain the emotional element to what we do.

Your sound has changed quite a lot…

The whole kind of…writing a big string thing, and playing a Rhodes piano is just so obvious…if you want that, then listen to the early albums. I’m not saying that there isn’t a sense of beauty on this record, because hopefully there is – but maybe you’ve got to work a little harder to hear it.

Your first LP made a huge impact – how do you feel about it now?

I’m glad people dug it, and it’s allowed us to be free of a lot of pressure because we sold enough of them to be kind of slightly more…progressive, maybe. It’s allowed us a lot of artistic freedom. It’s all very positive – how it was absorbed into the mainstream was very peculiar. The idea of people having dinner parties with it, meant that the mood of the record was overlooked a bit, really. Because that wasn’t really very nice. It was absorbed – but I’m not going to be a music police and tell people how they should listen to it.

Can you see them having dinner parties to this one?

No, I doubt it, but it’s not a reaction to that, it’s just where we are. At the time, some people took Dummy back to Woolworths because it had scratches on it – everyone thought that was odd when they first heard it. Hopefully this will be the same.