On the generally acclaimed Let England Shake, Harvey gave her music a bony, volkish edge, flaying it back to strummed autoharp, electric guitar and crude drums, mongrelising it with awkwardy intrusive sampling of Middle Eastern singers, dub interjections and huntsmen’s horns. Seamus Murphy’s cinematography complements this approach perfectly: not storyboarded, but collaged from various journeys around the island made during 2011, from the remotest hedgerows to the heart of London. 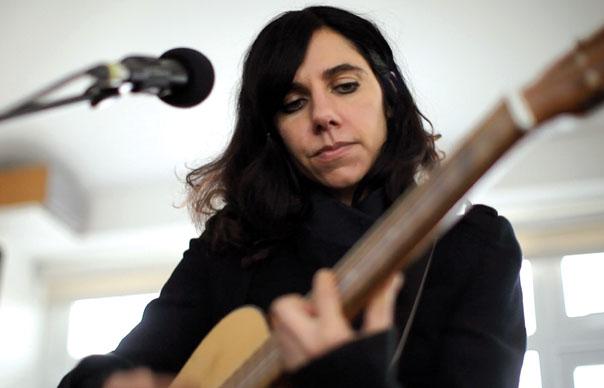 On the generally acclaimed Let England Shake, Harvey gave her music a bony, volkish edge, flaying it back to strummed autoharp, electric guitar and crude drums, mongrelising it with awkwardy intrusive sampling of Middle Eastern singers, dub interjections and huntsmen’s horns. Seamus Murphy’s cinematography complements this approach perfectly: not storyboarded, but collaged from various journeys around the island made during 2011, from the remotest hedgerows to the heart of London. In doing so he innately understands Let England Shake’s problematic elixir of melancholic poetics, progressive patriotism and anti-war critique, using a visual language that speaks of England from the ground up.

Harvey reportedly saw Murphy’s exhibition of war photographs, A Darkness Visible: Afghanistan, and commissioned him as a result. “I never wanted to interpret the album,” Murphy has commented, “but to capture something of its mood and force.” His films, made on lone trips, are largely in the mode of a travelogue, their photo-gallery approach recalling at times the British Transport Films of the late 1950s and 60s, or the static landscape framing of Patrick Keiller’s Robinson In Space. England can be, as he reminds us, “a gratifyingly odd place”.

Harvey, who has held a tight rein on her visual representation throughout her career, allows Murphy frank and up-close access. He films her alone in her Dorset house, shuffling through a ring binder of lyrics and rehearsing her songs with a guitar, autoharp and playback tapes. She fluffs a line with an “oh bugger” and lets slip shy, slightly embarrassed smiles after the tracks have finished. It’s a very human portrait of an artist often represented via distancing techniques.

But the films mostly consist of arrays of landscape photography. Murphy frames the ‘hunt’ aspect of “The Glorious Land” as a fast tracking shot of blurred treetops. “All And Everyone” ends with a gloriously desolate shot of a motorboat, tiny against the pewter sea, chugging away from Chesil Beach, just a triangle of pebbles in the bottom corner of the screen. It’s an apt and arresting image entirely suited to a record that has so much to do with England’s separateness from its neighbours.

Intercut with the landscapes are plenty of people: chance encounters and faces from across the spectrum of society. Several videos feature scenes of soldiers and mourners at Wootton Bassett, the conduit for Britain’s war dead. Heavy Metal fans and video gamers appear in “The Words That Maketh Murder”. In “England”, an archer watches his arrow’s dying fall and the camera tracks around a pub’s crooked picture frames containing the 1966 World Cup squad and other past English glories. Each track is prefaced by a member of the public reading out a section of the song’s lyrics. Best of these is a car mechanic whose running commentary on the car he’s fixing serves as an epitaph to the nation itself, as represented in these films: “She’ll soldier on, the good old girl. The old ones are the good ones.”

Harvey’s group – Mick Harvey, John Parish and Jean-Marc Butty – crop up in footage taken at St Peter’s Church in the village of Eype, near Harvey’s home, where the album was recorded and where she played an intimate launch party. “The Colour Of The Earth” is a real treat: the quartet huddles against the cold on the lane outside, performing the song a cappella, stomping out the rhythms and harmonising, like a modern-day Watersons in denim and leather. We’re left with a bonus solo version of “England”, just Polly facing the sea outside her window, vocally battling against Said El Kurdi’s ululations, telling how “England leaves a sadness”. It leaves you with an arresting and enchanting image of quiet resistance and creative determination.
Rob Young