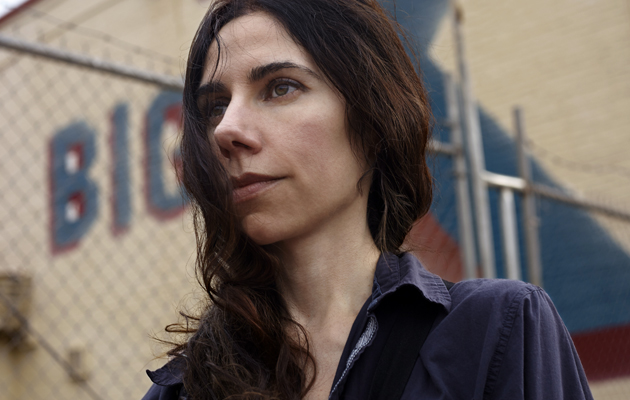 After two years spent touring The Hope Six Demolition Project, PJ Harvey returned home last November to take stock of her situation. “I’ve done this half my life,” she told broadcaster John Wilson in February. “Do I want to continue this way, or maybe do I want to try something different?”

Harvey has always been a theatrical performer, of course. Even the Recording In Progress project – where Harvey and her band worked on The Hope Six Demolition Project behind one-way glass in a soundproofed box beneath Somerset House – was as much performance as recording session. Increasingly, though, she has augmented her core business as a singer-songwriter with a parallel career composing scores for film, theatre and television. This, it seems, is where Harvey now chooses to focus her gifts. For an artist who has embraced such a wide range of approaches and manifestations, this latest incarnation as erudite soundtrack composer reinforces her restless creativity, evolving from the visceral savagery and raucous swagger of her early records to the urgency and historical contextualising of her most recent LPs and, now, somewhere beyond.

Her latest score is for a new adaptation of All About Eve by the Belgian theatre director Ivo van Hove. Van Hove has form here: he directed David Bowie’s Lazarus in 2015. For this story of a legendary Broadway star who is eclipsed by a manipulative aspiring actress, van Hove gave Harvey an open brief which yielded the 12 songs here, totalling 34 minutes of music. Eight of the songs are under two-and-a-half minutes; the shortest, “Cadenza”, runs for just over a minute. There are two vocal pieces – performed by the production’s leads, Gillian Anderson and Lily James. Clearly,  this is not a PJ Harvey album such as we’re used to.

As it transpires, All About Eve partly recalls Thom Yorke’s soundtrack for Suspiria – another largely instrumental project that amplified the artist’s gifts for conjuring moods full of murky unease, fragile beauty and wistful melancholia with only the briefest sketches. There is also something of the pensive soundtrack recordings made by Nick Cave and Warren Ellis – dominated by sparse piano playing and sickly, scraping drones.

Harvey sets out her stall early on All About Eve: opener “Becoming” is built around a four-chord piano motif that shifts beautifully between keys as a violin thrums above. Harvey frequently returns to this piano motif – inspired, she says, by Franz Liszt’s “Liebesträume”, which appeared  in Joseph L Mankiewicz’s 1950 film adaptation. She nests it in shifting electronic beds on “Lieben”, the stately violin drones of “Waltz” and amid the analogue synth pulses of “Shimmer”; Liszt’s piece also forms the basis for  “The Sandman” and “The Moth”,  the two vocal songs here. Sung by Anderson in a theatrical delivery similar to the higher register Harvey used on White Chalk, the drifting, becalmed manner of “The Sandman” wouldn’t sound out of place in a David Lynch film. Meanwhile, “The Moth”, sung by James, is a more conventional song – there’s drums, spidery guitar lines and a  middle-eight – where hints of piano chords and strings shift in and out, swelling and subsiding like waves lapping the shoreline.

Elsewhere, Harvey is accompanied by James Johnston and Kenrick Rowe – notably on “Descending” which features Rowe’s free-jazz drum freak-out against  a backdrop of oscillating electronic  effects worthy of the BBC Radiophonic Workshop during its ’70s prime. It’s one of the most effective pieces – not simply because it offers a change of dynamic to the ambient, minor-chord rumblings  that dominate the record, but because it hints tantalisingly at a fresh direction  for Harvey.

As a creative exercise, it feels useful for Harvey to have made this soundtrack. The use of “Liebesträume” lends these pieces a thematic cohesion; while the sustained heavy drones and sinister atmospheres reflect prolonged sonic exploration. As Lily James forlornly declares “I can’t wait for night to come,” over skeletal piano lines, you might be forgiven for thinking that All About Eve’s closest companion is the cobwebbed gothic folk of White Chalk – an album of lonely beauty and piercing sorrow  that has echoes in  All About Eve’s depiction of the inner lives  and complexities of its female leads.