An opulent, inessential boxset, with not one note remastered 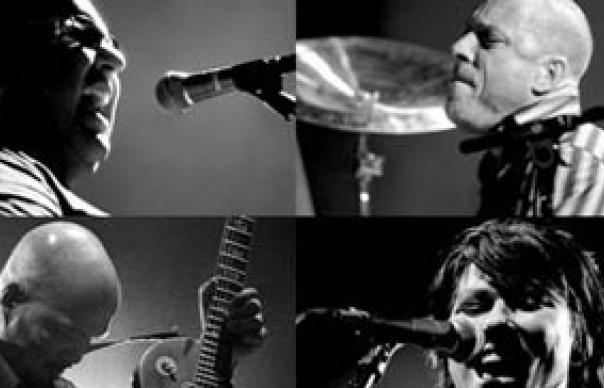 On April 21, a frisson went through the internet. A piece of art that looked like a record sleeve suddenly appeared on music messageboards and forums. It read: “Pixies, ‘Minotaur’, available for pre-order June 15”. Could it be true? A new “Pixies album? The follow-up to 1991’s Trompe Le Monde, for which the planet had waited as hungrily as a cheetah awaits a gazelle? What to expect: sliced eyeballs in 3D CGI graphics, with post-Animal Collective acid-noise sensibilities? Within two hours, the speculation was cut dead. Minotaur was a boxset of the old albums. Move along; nothing to see.

It’s funny that we still get so excited about the Pixies. This band of Massachusetts-based post-punk kids with a collegiate reputation and a heart of darkness. This music of Pentecostal charisma, with a lyrical codex that a TV guide would describe as “containing adult themes”. This bizarre confluence of David Lynch, The Violent Femmes and an English-Spanish phrasebook. A young person coming to the Pixies today must surely assume that they were some kind of late-’80s sci-fi stadium-rock band; a multimedia brand of cool that stretched from music to soundtracks to youth fashion to vodka adverts. But the Pixies, in fact, goosed the culture rather than governed it, and have admitted that their 2004 reunion was a way of seeking due recompense for the colossal influence that their work had on others (Nirvana, Radiohead, Franz Ferdinand, White Stripes, Foo Fighters) who really did break through to the mainstream. The Pixies paved the way for a world in which we encourage the concept of punky, angsty, million-selling albums with loud/quiet/loud guitars; but we must remember that their own masterpiece, Surfer Rosa (1988), took 17 years to earn a gold disc in America. Maybe the Pixies can never be recompensed.

And so we come to Minotaur, a boxset of Pixies albums that we all probably already own, with no remastering done to them, and no new tracks, and a price tag in the hundreds of dollars. Yes, hundreds. There are two editions of Minotaur, “available for pre-ordering on June 15”, and they cost $150 and $450 respectively. After one’s immediate sharp intake of breath, one finds oneself recalling the introductions of those old Monty Python albums (“Congratulations on purchasing the executive version of this record…”) as one looks helplessly around one’s home for paintings, furniture and children to put on eBay. The internet forums, when news of Minotaur’s monetary magnitude broke, resounded to comments such as “Hello???”, “Fuck off” and “I DON’T THINK SO”.

The premise of Minotaur is simple. It says that you – yes, you – are a person of some affluence and distinction. You enjoy quality and don’t mind paying for it. You appreciate beautiful artefacts and you like to handle exquisite books. You care about the tactile pleasures of vinyl, CD and arty booklet. If anything, you pine sentimentally for the days of double- and triple-gatefold sleeves, not to mention those wonderful old boxes that Beethoven’s symphonies used to come in. Specifically, you are an admirer – and this is the really important bit – of Vaughan Oliver, the English graphic designer who worked for 4AD and designed the sleeves of the Pixies’ albums. The monkey and the halo (Doolittle)? That was Vaughan. The bare-breasted flamenco dancer (Surfer Rosa)? Another winner from Vaughan. Now he and his team have taken the concept of a fine art catalogue and applied it to a Pixies boxset. So if you like Vaughan Oliver, you’re going to love Minotaur.

Since Minotaur doesn’t technically exist yet – once you’ve pre-ordered it, you have to wait until mid-September for it to be shipped – all we have to go on is what we’re being told. The Deluxe Edition (that’s the cheaper one) will include all five Pixies studio albums on CD and Blu-Ray: Come On Pilgrim, Surfer Rosa, Doolittle, Bossanova and Trompe Le Monde. According to some people, Neil Young among them, Blu-Ray is the way forward for the music business and we’ll just have to get used to it, but it’s worth repeating that the Pixies albums have NOT been remastered. The Deluxe Edition (remember, that’s the cheaper one) also includes a DVD of a Pixies concert at the Brixton Academy in London, a collection of the band’s videos (which were notoriously dreadful, as the Pixies, like many bands of their generation, were politically opposed to MTV) and a 54-page book of Oliver’s artwork. The Limited Edition will include everything in the Deluxe Edition, as well as all five albums on 180-gram vinyl, plus more artwork and a 72-page hardcover book, all housed in a custom clamshell cover.

Perhaps, in an age when tangible music (vinyl and CDs) is under dire threat of extinction, the Pixies have merely woken up and sniffed the future. Having pioneered a new way of structuring the rock song in 1987-8, maybe they’ve come up with a new way of marketing music. Aim it at the superfan who loves the whole aesthetic deal of it, from guitar riff to art print. You think our band is special? We’ll give you special! But where this theory falls is that the Pixies were not involved in Minotaur, and reportedly didn’t approve of the idea until they held the hardcover books in their hands. They were convinced of its magnificence, but then they’re not paying.

There’s a chance that we, too, will be convinced when the postman arrives, gasping under the weight of clamshell, in September. Sceptic and cheapskate that I am, though, I’m going to file Minotaur in the list of boxsets and lovely artefacts I can manage without. The original CDs will
do me fine.