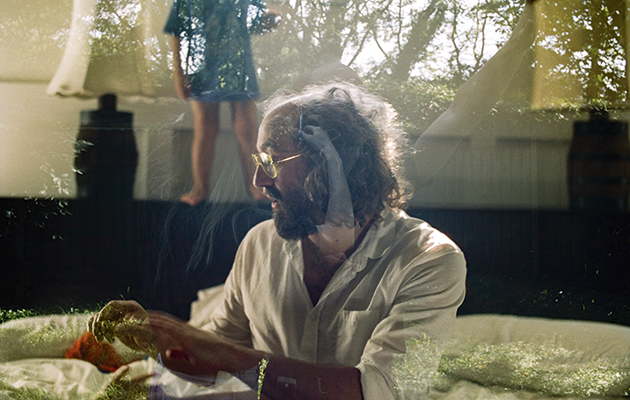 Ask him about the ninth album he’s recorded as Phosphorescent and Matthew Houck might tell you C’est La Vie was an album inspired by alien geographies, transformative circumstance. Change, in other words. What brought him from where he was to where he is, very different places, including marriage, children, moving to Nashville, nearly dying. But let’s back this thing up briefly. Go back, I mean, to December 2013. With Christmas coming, chestnuts roasting and all, Phosphorescent played four blow-the-roof-off shows at the Music Hall Of Williamsburg, in Brooklyn, a triumphant homecoming after eight months touring behind recent album, Muchacho. The shows were taped, more than 10 hours of music eventually edited down to the 2CD Live At The Music Hall.

The album covered a decade of Phosphorescent music, seemed like a summit approached and a peak reached,  a career summation, the end of something. Houck admitted to the same feeling when I spoke to him just before the album came out in 2015. Much about his life had already changed. He’d fallen in love, married, moved to Nashville, become a father. He seemed happy, content. So much of his music to date had come from love’s dark ditch, heartbreak and fractured romance, you wondered what his new songs might be about. I tried not to imagine him sitting on his Tennessee porch listening to Planet Waves or something about two cats in a yard by Willie Nash and deciding hymns to unlikely domesticity might be the way to go.

There’s some evidence to suggest this is the way things might actually have gone if Houck along the way hadn’t almost died from meningitis; nothing like a near-death experience to bring a cloud to the prettiest sky, however bright with promise. “C’est La Vie No 2”, for instance, is a song written around the contradictions of who Houck was and who he has become. “I wrote all night, like the fire of my words could burn a hole up to heaven,” he sings over pumping keyboards, a bopping rhythm. “I don’t write all night burning holes up to heaven no more,” he goes on, evidently a changed man, his wilder instincts house-trained. “New Birth In New England” is an even more conspicuous testament to his new circumstance, one verse recalling a chance encounter that turns into love, another the birth of a child. The track has the glorious lilt of vintage Paul Simon – “Mother And Child Reunion”, perhaps, or “Me And Julio (Down By The Schoolyard)” – lifted by a gorgeous calypso breeze, something blowing in from the Caribbean. “There From Here” similarly finds Houck adjusting to his new self, caught at a point where you are not yet the better person you are trying to be. The anxious father, perhaps, of “My Beautiful Boy”, a protective lullaby, Houck watching his son asleep, gripped by the mortal terror of the boy dying, searching and not finding him in heaven, the afterlife not quite as advertised, the music here lush, trembling, anguished.

Houck’s previously been a meticulous studio perfectionist, playing many of the instrumental tracks himself, bringing in musicians for specific parts as needed. If C’est La Vie was recorded in the same manner, Houck’s at least found a way to make the tracks sound like they’re being played by people who are in the same room at the same time, where earlier you might have thought of isolation booths, baffle boards, overdubbed solos, imported drum tracks, the whole thing built from scratch and parts. The eight-minute “Around The Horn”, a motorik chug reminiscent of Wilco’s “Spiders (Kidsmoke)”, sounds like a spontaneous live groove. It’s not quite a jam, but his outstanding regular band sound untypically liberated. It inflates over a final few minutes into something uniquely epic, one crescendo after another, a swarm of voices, guitars, seething synthesisers, relentless keyboards and engulfing noise. The weird, curious, enigmatic “Christmas Down Under” aspires to a more studied, slow-burn grandeur. Pedal steel and electric guitar in soaring unison recall the dizzy atmospheres of earlier Phosphorescent classic “Los Angeles”. Lyrically, it’s pretty baffling where “These Rocks”, one of the album’ standout tracks, is the most openly confessional song Houck has written, set to a churchy musical swell, congregational and healing, the sound of a lifetime burden lifted by love.