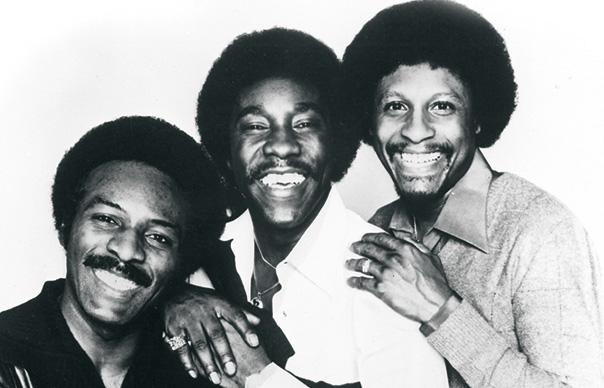 For most of the 1970s Kenny Gamble and Leon Huff ruled soul music like twin emperors. They weren’t the era’s most influential presence – that accolade belongs to James Brown – or the most artistically inspired – for that you can squabble about Sly, Marvin, Stevie, Curtis and more – but in terms of relentless chart success their productions swept all aside.

Using 1960s Motown as their template, Gamble and Huff created a hit factory with an array of acts defined by the ‘Sound of Philadelphia’, a woozy orchestral overload which could punch on the dancefloor with The O’Jays’ “Love Train”, go into sob meltdown on Harold Melvin and the Bluenotes’ “If You Don’t Know Me By Now”, or play sexy sophisticate on Billy Paul’s “Me and Mrs. Jones”. Along with The Three Degrees’ “When Will I See You Again”, these and other tunes reached way beyond black America and its devotees to become a global presence.

That these creations have never really gone away testifies to a songwriting team comparable to that of Lieber/Stoller or Rogers/Hammerstein. Like them, Gamble/Huff were products of Tin Pan Alley, working out of Philadelphia’s Schubert building, where they clocked in, wrote, made records with their own group, The Romeos, and hussled for production jobs, landing Dusty Springfield and Laura Nyro among others. In 1972 they founded Philadelphia International Records (PIR).

Their breakthrough was instant with the O’Jays Back Stabbers (1972), still the group’s and the label’s finest hour. It married Eddie Levert’s gritty vocals to classy arrangements by Thom Bell, a key player in the PIR team.Writers McFadden and Whitehead were another key part of this, penning many of the album’s lyrics, including those to “Love Train”, a triumphant, gospel-tinged call for global unity.

After that Gamble and Huff went on what they term “a creative rampage”. Spotting that Harold Melvin’s drummer, Teddy Pendergrass, was a far better vocalist than Harold himself provided them with a sexy new star, and they fashioned another from 37 year old local crooner Billy Paul with the adulterous“Mrs Jones”, a number that might have been in Sinatra’s repertoire a decade before. Much of what PIR produced was amiably bland, including “T.S.O.P.”, which became theme tune to US TV’s pivotal Soul Train, but the formula of fat drums, sweet strings and polished horn parts was a winner, and was easily applied to a roster that included old-timers like The Intruders, Lou Rawls and Jerry Butler, and younger acts like The Jacksons (off Motown without Michael), The Jones Girls and Jean Carn.

As at Motown, PIR’s production line inevitably blurred acts’ identities, but the O‘ Jays were always handed strong material, with their Ship Ahoy album a powerful commentary on slavery (on the ten minute title track), greed (“The Love of Money”), and pollution (“The Air I Breathe”). Even Pendergrass, who specialised in romantic anguish like “If You Don’t Know Me By Now” and “Don’t Leave Me This Way” (borrowed by Motown’s Thelma Houston) had a message song in “Wake Up Everybody”.

While many soul labels were wiped out by disco, PIR surfed the wave. The Bluenotes’ “Bad Luck” and The People’s Choice’s “Do It Anyway You Wanna” were immense on the dancefloor, as was 1979’s “Ain’t No Stopping Us Now”, where McFadden and Whitehead stepped up from backroom duties. Simultaneously PIR expanded into jazz-funk, chiefly via Dexter Wansel, who had a penchant for sci-fi themes like “Life On Mars”. With the change of decade, PIR’s success slowed, though the Jones Girls, whose “Nights Over Egypt” (1981) remains a soul anthem, prosperered alongside the ill-starred but gifted Phyllis Hyman and Teddy Pendergrass, whose 1982 car crash, whiCh left him semi-paralysed, seemed to mark the end of Philly’s rule.

The Box Set sets out the PIR story in accessible style, roughly chronologically but always with an eye on theme and continuity. Itts 175 tracks are more than most will want, but it’s impossible to imagine a better testament to a glorious chapter in black American history.
Neil Spencer

Q&A
Kenny Gamble and Leon Huff
There’s a huge gap between your early productions – ‘Northern Soul” to us Brits – and the sound of PIR. What happened?
Gamble: We were evolving fast, but the essential thing was adding the orchestra, the sound of a french horn or a string section, and the rapid development of technology through 2, 4, 12 and 24 track consoles.
Huff: We had a great team, and the Romeos became supreme players. We were travelling at the speed of thought, eh Gamble?
Gamble: I marvel at how in the world we did it all.

There were always message songs amid the love tunes – even in a disco number like “Clean Up The Ghetto”by the Philly All Stars…
Gamble: We wrote to make people dance, to feel but also to think. There was an O’Jays song, “Music is the Message” but the real message is always love.

Who were your inspirations?
Gamble: James Brown’s “Say It Loud I’m Black and I’m Proud)” is the most inspirational song ever.

What is your favourite Philly song, and which did you feel got away?
Huff: “Love Train”.
Gamble: Everything is in that record, Huff!
Huff: Some of our best productions were b-sides – like Jerry Butler’s “Brand New Me” which became a hit for Dusty.

You guys call each other by your surnames?
Gamble: I can’t ever recall a time I called him Leon or he called me Kenny!
INTERVIEW: NEIL SPENCER