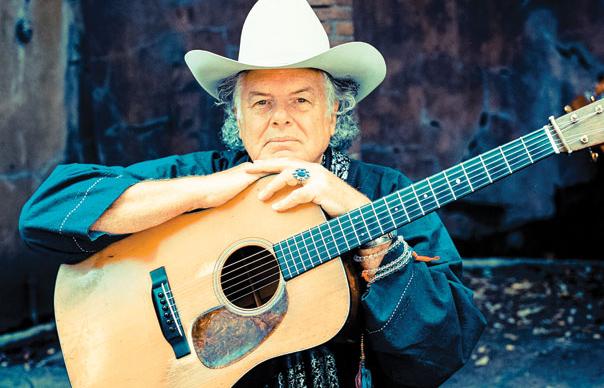 Dharma Blues is arguably Rowan’s most personal album in a career spanning five decades. It began playing guitar with bluegrass patriarch Bill Monroe, three years travelling which taught Rowan there were no limits. “Bill’s style had more edge to it,” he reflects. “I learnt to assimilate the roots of bluegrass which cover Cajun, blues and western swing. I’m not unique; we’re all following in some mighty big footprints.”

On leaving Monroe, Rowan formed the contrastingly conceptual Earth Opera, recording two art-rock albums which were “too weird for the band members but now sound strange and wonderful.” Next, Rowan teamed up with violinist Richard Greene in the multi-talented Seatrain; George Martin brought an English savvy to producing them: “When I wanted to add mandola to a track he said, ‘but Peter, when I hear that sound, I just see Gondolas!’”

Jerry Garcia then recruited Rowan for his spin-off project Old And In The Way. “We were laughing like fools that we were on the charts with a bluegrass record. Jerry loved the band but had the Dead so it was doomed.” Since going solo in 1978, he’s been shrewdly exploring the roots of Americana and Dharma Blues has a spiritual calm which is, he says, a “tip of the hat” to Jimmie Rodgers. His relaxed approach suited Rowan’s “life changing songs” written during a pilgrimage to India, Japan and Thailand. The finishing touch is a natural, exotic sound, mixing steel guitar, banjos, tamboura and bamboo flutes; Gillian Welch further enriches Rowan’s tenor voice on three songs. Rowan still tours relentlessly in five different bands including his Bluegrass Band and Free Mexican Air Force with Tex-Mex accordionist Flaco Jiminez. At 72, what’s his secret? “Try to eat right,” he declares serenely, “breathe, count your blessings, pray and meditate an hour a day – and try to rest like a jaguar on a tree limb when you can.”
Mick Houghton