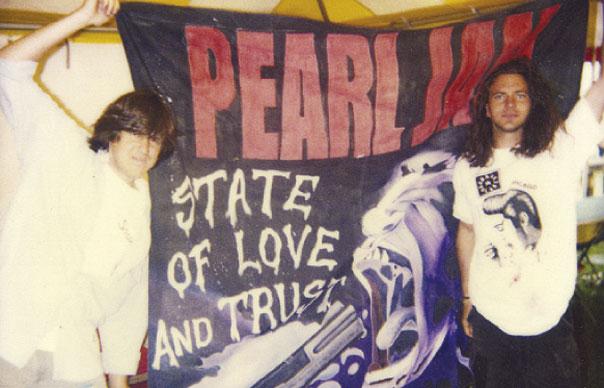 This is not the first time Pearl Jam have featured in a Cameron Crowe film. In Crowe’s affectionate Seattle rom-com Singles, released at the peak of the grunge boom in 1992, Eddie Vedder, Jeff Ament and Stone Gossard appeared as members of Citizen Dick, a hapless fictional group fronted by an epically gormless Matt Dillon.

In Pearl Jam Twenty, essentially Crowe’s present to a band he has long loved, the same musicians are altogether more businesslike. The key theme of the film – young men learning to cope with sudden fame – is also its key drawback. What Pearl Jam learnt on their journey from wannabes to megastars is that you only stay sane during that supremely head-messing trip by setting parsiomonious limits on how much of yourself you give away, whichever old friend and distinguished rock journalist turned Oscar-winning director is asking the questions. “At some point,” says Stone Gossard, reflecting on Pearl Jam’s early ascent, a rise so vertiginous that it threatened to cause breakups and breakdowns, “you have to say no.”

It’s possible to see that this is a good thing for the members of Pearl Jam, who all appear to have arrived in middle age thoughtful, grateful, businesslike – and, above all, content. As Crowe’s insightful illustration of the 80s/90s Seattle milieu that spawned Pearl Jam reminds, this was never guaranteed. Though the scene was unusually mutually supportive, it was also somewhat self-destructive. Pearl Jam might never have existed had Andrew Wood, who sang in Gossard and Jeff Ament’s previous group, Mother Love Bone, not overdosed. One of the most affecting of the archive clips is of Pearl Jam performing the night they learnt of the self-inflicted death of their inspirational rival Kurt Cobain, Eddie Vedder gripped by a rare struggle for words.

Intriguingly, Pearl Jam Twenty suggests that what saved the group was their friendship and collaboration with Neil Young, who seems to have served as a sort of gnarled spirit guide. Young’s voice is heard in the portion of the film that deals with Cobain’s death, sighing that he’d wanted to call the kid and remind him that he was under no obligation – that if he found being a rock star that much of a hassle, he could cease being one, or continue on whatever terms suited him. Pearl Jam are eternally grateful for his counsel. “I was happy,” recalls Vedder, “to finally have an adult in my life who leads by example.”

If Pearl Jam Twenty is shortish on personal revelations, it is gratifyingly long on exceptional live material. The early footage is especially astonishing. At their second ever show, barely a week after they first convened, Vedder hides behind his hair. Within months, as the Ten tour rolls across America and Europe, he has blossomed into an exhibitionist as thrilling as he is dangerous, regularly vaulting into Pearl Jam’s burgeoning crowds from stages, crash barriers and lighting rigs. McCready, Ament and Gossard all attest that at various points they worried about him killing himself. earl Jam Twenty is the story of a man and a band finding a way to return gently to Earth.
Andrew Mueller