PAVEMENT – QUARANTINE THE PAST: THE BEST OF…

Appropriately inscrutable ‘Greatest Hits’, from a band that tried hard never to have any... 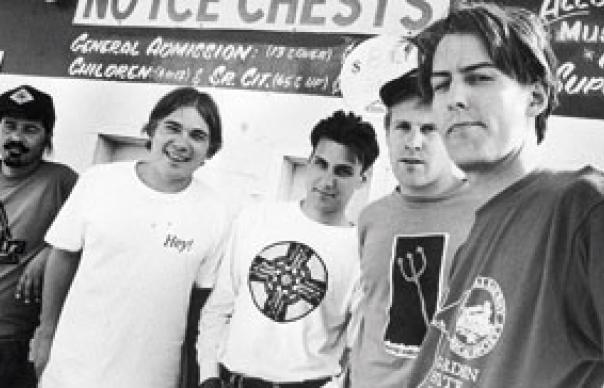 Pavement began the ’90s in suburban Stockton, California, a pair of smartass slackers, burrowing into the footnotes of rock history via a series of cryptic, elliptical EPs that felt like in-jokes for Swell Maps fans. They finally disintegrated one month before the end of the decade, amid exhausted recriminations onstage at the Brixton Academy.

In the years in between they somehow contrived to become the most beloved US indie rock band of the ’90s. So much so that news of their reformation for a series of festival dates this year reduced otherwise sober thirty- and fortysomethings to the kind of online hysteria last seen when Jedward got eliminated from The X Factor.

This new 23-track compilation, cherry-picking the back catalogue from 1989’s “Box Elder” through to 1999’s Terror Twilight, might help resolve the band’s final enigma. They weren’t, after all, an especially innovative group; they weren’t blessed with stunning musicians or a great singer. There isn’t much in the way of social or historical significance, and they never erupted onto MTV. So how did they come to represent the alt.rock ’90s, become the missing link between REM and Animal Collective?

Typically, Quarantine… scrambles the story, kicking off with the Proustian rush of 1994’s “Gold Soundz”, then zig-zagging back and forth across the years before ending with 1995’s “Fight This Generation”. It’s skewed, in line with received critical wisdom, towards the early years: five tracks each from the early EPs, Slanted And Enchanted and Crooked Rain, two from Wowee Zowee, four from Brighten The Corners and just one from Terror Twilight.

You can hear the band get tighter, chops get slightly slicker, but there’s no huge development. In fact, Pavement seemed fully formed by the time of “Trigger Cut”, the 1992 single that marked their promotion to first division US indie Matador, and the first time they came to the attention of many in the UK. It’s instantly melodically irresistible – you can understand what led first drummer and studio boss Gary Young, to declare a snotty college kid, Stephen Malkmus, “a complete songwriting genius”. It bears the traces of Malkmus’ soft-rock childhood (via the ghost of Jim Croce’s “Operator”) and his teenage artpunk research (the knotted craft of Wire’s “Outdoor Miner”). But it chiefly highlights his unique gift for the intriguing, ultimately unresolvable lyric. “Lies and betrayals and fruit covered nails/Eeee-lectricity and lust” he drawls with deceptive grace, as though itemising the ingredients of his lyrical recipe.

The band came into greater focus for 1994’s Crooked Rain, rooting their metropolitan East-Coast pretensions in the North Cali of their youth. The album made good on their aspirations to marry Velvets poise with Creedence grit, and, as the selection here makes vividly clear, with tracks like “Gold Soundz”, “Cut Your Hair”, “Unfair”, and “Heaven Is A Truck”, it marked the group’s creative high noon. “Range Life” is the key: simultaneously a gorgeously stoned slice of suburban pastoral (“out on my skateboard, the night is just humming…”), and definitive Gen X document, baffled at the apparent appeal of Stone Temple Pilots and Smashing Pumpkins.

1995’s Wowee Zowee – unfocused even by Pavement’s standards – could be seen as the moment the band dropped the ball, stumbled when they could have crossed over to become minor starlets of the alt.rock mainstream. Yet maybe this apparent failure is ultimately their defining moment, perfectly in tune with their catalogue of frustration and elegant ennui.

Even when they returned with supposedly more radio-friendly singles like “Stereo”, hobnobbed with Britpop royalty or employed Nigel Godrich to produce the swansong of Terror Twilight, they retained their characteristic aristocratic aloofness from the desperate commercial scramble of the mid-’90s. In a sense, nothing became the group so much as their hobbling of their own career. A step away from the spotlight, Pavement served as the conscience of a generation of US indie. And now that such groups flare and die like mayflys, they’re a reminder of the indie band as enduring public enigma. In these overlit times, we could do with a few secret-cret-cret-cret-crets back right now.
Stephen Trousse