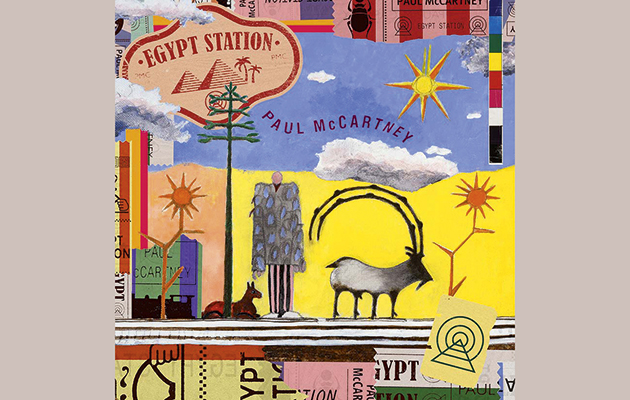 Given the jaunty, shamelessly button-pushing preamble to the release of Paul McCartney’s 17th  solo studio album –  a televised magical mystery tour around key Liverpool haunts in the company of James Corden; hometown gigs at the Philharmonic and Cavern; everything short of piloting a yellow submarine across the Mersey – you might have expected the actual record to be awash with ringing Rickenbacker, supercharged beat music and waggle-headed harmonies.

At 76, McCartney is entitled to trade on old glories, but Egypt Station is nothing so obvious. His first album since 2013’s New is produced by hitmaker for hire Greg Kurstin, with a sole contribution from the similarly clubbable Ryan Tedder. Following recent collaborations with Rihanna and Kanye West, the immediate suspicion is that Macca is more concerned with relevance than nostalgia, a theory backed up by the blast of youthful exuberance, even irreverence, of “Come On To You” and “Fuh You”. The former is just the right kind of dumb. Boasting thuggish drums, rattling piano, sitar solos, cool horns and a melody a toddler could master, it goes for the full “Lady Madonna” vibe. The latter is more contrived, a rather grim pitch for the millennial market that isn’t so much edgy as unseemly.

Such is the tightrope between ‘now’ and ‘then’ traversed by Egypt Station. The pre-match puff pitches the album as a “journey”, framed by two brief, ambient instrumentals. If so, it follows a haphazard itinerary in an attempt to cover all bases. There’s pop Macca, rock Macca, experimental Macca, acoustic Macca, funky Macca – and senior Macca. “Happy With You” might be the first song on which McCartney has truly sounded like the old man he now is. A frugal campfire tune, with echoes of Peter Gabriel’s “Solsbury Hill”, his voice creaks on words that reveal a clenched fist behind the raised thumb.  “I used to get angry,” he sings. “I sat around all day/I liked to get stoned/I used to get wasted/But these days I don’t.”

“Confidante” is even more regretful, a surreal but heartsore tale of busted friendship set to a ragged minor-key folk strum, while the excellent “Do It Now” is a stately valediction (“I’ll be leaving in the morning, watch me go”), bent on seizing the day before the shadows fall. It’s one of the few occasions where McCartney and Kurstin bring out the big guns – cascading drums, orchestra, choir and all.

On these reflective songs, redolent of the long road travelled and the far shorter path ahead, the hard weather in his voice works well. That high, bell-like tone may not ring so sweet these days, but McCartney can still raise a serviceable scream when the mood takes him, as it does on “Who Cares”, a low-slung blues boogie powered by greased-up ZZ Top guitars, and “Caesar Rock”, a rousing semi-acoustic funk-rock curio that finds McCartney apparently auditioning for Spinal Tap vocal duties.

For ballast, there’s a handful of tunes that could have appeared on any McCartney album since Flowers In The Dirt. On the ropey “People Want Peace” – “I know that you’ve heard it before…” – you can only admire his fealty to this particular theme while acknowledging that it has become a creative bone-yard. Opener “I Don’t Know” is better, a solid, mid-tempo piano archetype flooded with late-night anxiety. “Crows at my window, dogs at my door,” he pines over simple, chunky chords, “Where am I going wrong?” “Dominoes” – a favourite pensioners’ pastime, lest we forget – offers an embarrassment of melodic hooks, with a rare sunburst of harmonies and some Revolver-style backwards guitar on the outro. “Hand In Hand” is a wisp-like beauty, pastoral and fragile, with a superb, serpentine melody.

If these are the album’s equivalent of central stations, McCartney ventures further afield on the branch lines. “Back In Brazil” is an eccentric electro bossa nova, surfing a funky clavinet groove and featuring a flute solo that raises the spectre of Ron Burgundy in Anchorman. It comes close to pastiche while foregrounding an experimental spirit that reaches full bloom on “Despite Repeated Warnings”, a seven-minute multi-part suite on which Macca unburdens himself of his thoughts on Brexit (“We have been misled… What can we do to stop this foolish plan going through?”) and Trump (“The captain’s crazy… How can we stop him, grab the keys and lock him up?”) via the extended metaphor of a capering quest to stop a mad skipper running his ship aground. Consciously doffing its hat to “Band On The Run”, “Live And Let Die” and “Happiness Is A Warm Gun”, among others, the music flips from proggy piano plod to chugging rocker, before undertaking further handbrake turns into thrusting orchestral rock and crunchy blues. The last words we hear as the vessel veers towards the rocks is a mocking, “It’s the will of the people!” It’s as inventive as it is endearingly silly. Hidden track “Hunt You Down/Naked/C-Link” evolves from primal rock through warped doo-wop to crying blues in similarly entertaining fashion.

It all adds up to an artist in rude creative health. If none of Egypt Station is quite startling enough to shift preconceptions about the most famous musician on the planet, it’s sufficiently vibrant to justify its existence, and strong enough to ensure that McCartney can sprinkle three or four tracks into the set on his upcoming world tour without setting off any alarms. Despite the distance travelled, at this late stage Beatle Paul is still travelling forward, yet to reach his destination.