An intimate portrait of the punk poet - but does it delve deep enough? 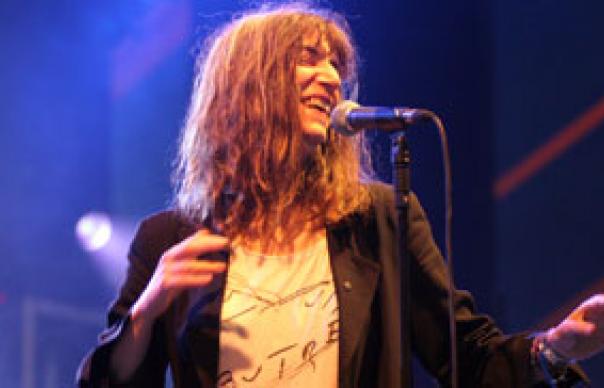 The most remarkable thing about Steven Sebring‘s documentary about Patti Smith may be that it was completed at all. Over the course of 11 years, through maxed out credit cards and miles of 16mm film, Sebring diligently documented Smith’s return to rock and roll after the years of Detroit domesticity, trailing her around the world, from the Chelsea Hotel to the marketplace of Jaffa. And yet somehow he emerged from this decade-long encounter with one of the world’s most fascinating creatures with a strangely insubstantial film.

Sebring is a fashion photographer by trade and this may be part of the problem. At one point, Smith explains how she used to imitate Dylan, right down to the way he hailed cabs, from endlessly reviewing Don’t Look Back. Sebring characteristically confesses he’s never heard of it. It feels typical of a film that almost entirely abdicates imaginative enquiry. In one disappointing sequence, Smith hooks up with ex-lover and collaborator Sam Shepard for a jam session (where she gamely demonstrates how she’s failed to learn guitar in the course of 30 years in the business). The pair exchange embarrassed small talk, withering in the gaze of the camera, until Smith excitedly remembers some intoxicated 70s evening when the pair decided to get matching tattoos. “Yeah,” sighs Sam, “That was a weird night at the Chelsea.” Sebring doesn’t press the point. Repeatedly, promises of revelation flare, only to fizzle as the film unwinds in an endless stream of dressing rooms and tour buses, pilgrimages to the tombs of Shelley and Corso, homages to Williams Blake and Burroughs, Roberts Mapplethorpe and Zimmerman…

It’s all like a pretty, pretentious, slightly embarrassed home movie. And yet it does have the virtues of that form: it’s touching to follow Patti’s return to her parents home in south Jersey or to see her pride in her children, who grow from grungy kids to elegant, acerbic adults before our eyes. But you get little sense of Smith as an artist, and there’s scandalously little footage of her as a performer. Instead, you’re left with the portrait of a woman lost in remembrance for lovers, friends and idols. The title comes from Shelley’s elegy for Keats, but the next lines might better capture Smith today: “Tis we, who lost in stormy visions, keep / With phantoms an unprofitable strife”.