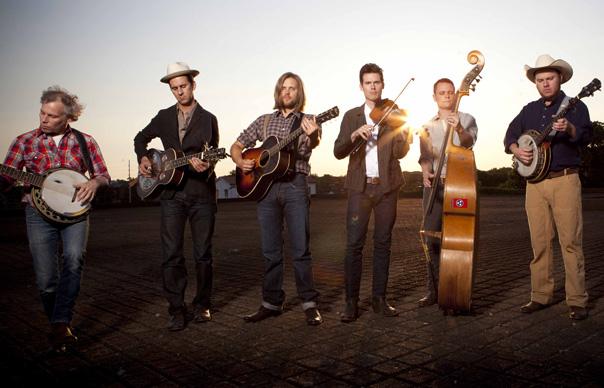 Since 1998, when old-time music buffs Ketch Secor, Critter Fuqua and Willie Watson first joined forces as travelling buskers, the Old Crow Medicine Show have survived and prospered through a combination of serendipity and resoucefulness. After relocating from upstate New York to the Appalachian village of Boone, N.C., Old Crow caught the ear of Doc Watson while playing in front of a local drugstore, which landed them their first big break – a slot on Doc’s MerleFest in 2000. Soon thereafter, they moved to Nashville, where they were taken under the wing of Marty Stuart, who booked them on the Grand Ole Opry. They also hooked up with Gillian Welch and David Rawlings, which led to Rawlings producing their first two LPs, 2004’s O.C.M.S. and 2006’s Big Iron World. During that period, Old Crow became regulars on the National Public Radio show The Prairie Home Companion, giving them a national profile with precisely the right audience.

Meanwhile, “Wagon Wheel”, a single off of O.C.M.S. that Secor had written as a teenager around the chorus of an unfinished Bob Dylan song, was selling consistently as a download, yet spreading almost exclusively via word of mouth in an improbable collision of digital technology and the oral tradition. That timeless-sounding tune has sold more than 600,000 units while being performed nightly by countless groups in bars and on college campuses. The band’s catalog, also including 2008’s Don Was-produced Tennessee Pusher, is now up to 700,000 in album sales. Since their beginnings, they’ve been touring their asses off, including jaunts with Stuart and Merle Haggard, while in 2011 they joined Mumford & Sons and Edward Sharpe & The Magnetic Zeros on a train tour, the subject of the documentary feature Big Easy Express. What’s more, mandolin player Cory Younts is currently on loan to Jack White as a member of his “male” band. And if OCMS still aren’t on the mainstream radar in their native country, the band is undeniably a grass-roots phenomenon of uncommon scale.

Clearly, this hard-working, virtuosic string band has reached a pivotal moment in its career arc, with the all-important fourth album on a new label – Dave Matthews’ ATO – produced by Ted Hutt (Gaslight Anthem, Dropkick Murphys, Flogging Molly). During the sessions, they welcomed back Fuqua, who’d split awhile back, and parted ways with Watson – but not before the latter contributed significantly to the new album, most notably on the group’s signature wood-grain-textured high harmonies. If this is Watson’s swan song, it’s a hell of a way to go out. Carry Me Back is the apotheosis of Old Crow’s distinctive musical recipe, which juxtaposes homespun original songs that sound like they’re coming off scratchy 78s with an attitude laced with punk-like exuberance, as they address contemporary themes with compassion and conviction, much like their forebears, from Seeger to Dylan.

This drum-less, all-acoustic band has never sounded more supercharged than on the Civil War narrative “Carry Me Back To Virginia”, the amphetamine square dance reel “Sewanee Mountain Catfight”(“girls gone wild/on the Tennessee line”), the sly Hank Williams salute “Country Gal” (“honey let’s have a roll in the hay/good-lookin’ country gal”) and the lathered-up “Mississippi Saturday Night”. The latter song harnesses a Jerry Lee Lewis-like abandon to a resonant example of what Secor calls “the topical format”, as the narrator sucks down “forties in a Skylark” amid the physical and emotional ravages left on the land and its inhabitants by Katrina and the Gulf oil spill. The somber subject matter of “We Don’t Grow Tobacco” and “Half Mile Down”, laments for rural Southerners who have lost what had been the basis of their lives for generations, is offset by spirited, life-affirming performances.

With all the percolating energy the album delivers, its three most memorable songs are ballads: the gut-wrenching, Dylanesque “Levi”, the true story of a country boy who was killed in the Iraq War, and the hardscrabble anthems of endurance “Ain’t It Enough” and “Ways of Man”. In “Ain’t It Enough”, Secor and his bandmates raise their earthy voices on what could serve as the credo for this single-minded populist band: “Throw your arms round each other/and love one another/ for it’s only one life that we’ve got/and ain’t it enough?
Bud Scoppa

Q&A
Ketch Secor
I hear echoes of The Band, the Stones and the Byrds in your music.
What we have in common is a reverence for American folk songs, for artists of the generation before them. The real kinship between us lies in our record collections.

What sets you apart from other roots bands?
What’s different about Old Crow is that we really are playing the music of the American South – it’s not to a dance beat or with electronic instruments. So the application of it has to do with the songwriting. Hear we’ve written these brand new songs with a contemporary focus and scope, but we’re using the instrumentation of our region.

There’s nothing remotely academic about your approach.
The tendency with a lot of bluegrass and old-time string bands is they play those instruments from behind the glass case that they’re in, and Old Crow just wanted to bust them out. These instruments are meant to be not just played but beat on. We started on the street corner, where the test is, can you play louder than howling dogs and ambulances? I like to think that finally we’ve got a record in which all of the songs will pass that test.

It feels like your moment has arrived.
The fact that it coincides with the passing away of Doc Watson is a profound coincidence.
INTERVIEW: BUD SCOPPA