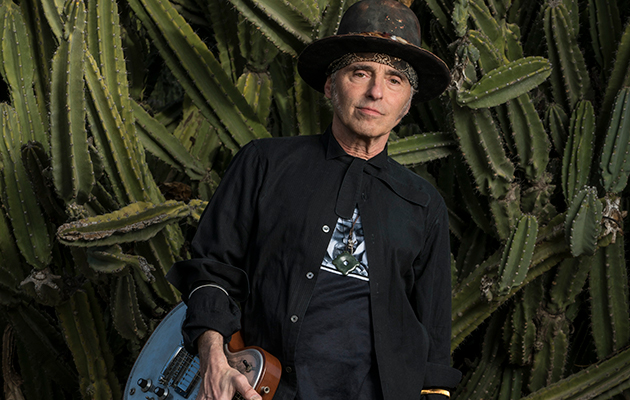 Guitarist to the stars, Nils Lofgren teamed up with Lou Reed circa 1979, via producer Bob Ezrin, and Blue With Lou finds the guitarist documenting their collaboration 40 years on. Lofgren’s voice is crackly, but plays perfectly into rockers like the hook-laden “Attitude City”. The dark, funky “Give” finds Reed putting life’s meaning into perspective, but Lofgren’s wicked, acidic guitars fly it into unknown stratospheres. Another Reed/Lofgren co-write, “Don’t Let Your Guard Down”, is spare, but no less striking. “Rock Or Not”, topical and timely, towers among Lofgren’s originals, and Keith Richards should consider covering. LUKE TORN

So how did Blue With Lou come about?

Prior to Nils, my release at the time, I was bouncing back and forth between New York and Garrett Park in Maryland, where I have a rental house, going through pre-production with producer Bob Ezrin. At one point, Bob said, “Look, there’s a lot of great music here, but I think the lyrics on the new songs aren’t as good as the ones you’ve already chosen. Would you consider some co-writing?” I said of course, if it would make the record better.

Bob said, “An old friend of mine, Lou Reed, is recording in town. I want to go by and see if you two could get together and do some writing.” I loved Lou Reed, so we went by. I’d seen him many times, but the first time I met Lou he seemed surprisingly open to the idea and suggested we get together at his Greenwich Village apartment the following week, to discuss it. It was a Monday night, which is American football night on TV. Surprisingly, he was a huge NFL fan. I grew up in the Washington DC area, so I was a big fan of the Washington Redskins, who were playing the Dallas Cowboys that night. They were our big rivals and it turned out that Lou was a Dallas Cowboys fan. So it was kind of a nice icebreaker in the sense that we poured ourselves some stiff drinks and sat back, unexpectedly, to really enjoy a game where we were good-naturedly rooting against each other. And it gave us some impetus for an initial bond that evening and, between that and sipping some good drinks, we batted around the idea of writing together.

We came to discover that my forte is music, in the sense that I write music quite effortlessly and regularly, and, in general, I struggle with lyrics a bit more. Lou said, “I’m the exact opposite. I write lyrics all the time, they’re pretty good. But I tend to take a bit more elbow grease on the music.” I sent him a tape of 13 songs, all with melodies and bridges and most with titles.

A few weeks went by and at about 4:30am I was sound asleep and the phone rang. I answered it and it was Lou Reed. I was happy to hear from him, but surprised at the hour. He said, “Nils, I love this tape that you sent me. I’ve been up for three days and nights straight, working on this tape, and I’ve just completed 13 sets of lyrics that I’m quite happy with. Look, if you like, I’ll dictate them all to you.” I was just so stunned. I said, “Lou, give me a minute here. Do you mind if I put on a pot of coffee?” Over the course of a couple of hours, he dictated 13 songs that I’d just co-written with Lou Reed.

It was kind of a genuine partnership and we moved forward with it. He used three of the songs on The Bells and we used three on the Nils album. I always felt that the songs that got left behind were great and ones that Lou could deliver in his style. I thought, “Well, I’ll get to them and maybe readdress them with Lou,” but then he tragically passed away on us. After that, it started gnawing on me. Lou was no longer here to even approach about doing them and I thought it would be such a shame if they stayed in the basement forever.

Yeah. I love what Lou did with “City Lights”, but I always loved the original melody and wanted to do it with that. And as a nod to our history, Branford Marsalis was kind enough to play a beautiful story through it on his sax.

One of your new songs is “Dear Heartbreaker”, which is a Tom Petty tribute…

My wife and I always went to see Tom Petty whenever he was playing in Phoenix. In fact, probably the last tour that The Heartbreakers were ever an opening act was for me in England. We did a five- or six-week tour through the UK [1977]. The Heartbreakers kicked our ass every night. Anyway, Benmont [Tench] hooked us up with tickets to see The Heartbreakers at Red Rocks in Colorado [30th May 2017]. It was just a beautiful night and we went backstage to say hi to everybody afterwards. And, of course, it never entered our minds that it would be the last time we ever saw Tom Petty & The Heartbreakers.

I was thinking about that show one day and Tom Petty’s loss is something that my wife and I talk about daily. It was just a real blow. I started singing this little lyric, then it turned into a verse or two. And I kept getting ideas for it, even though I still wasn’t planning on writing this song. But it became quite a long narration, which is how it ended up on the record.

I’m thrilled to have a tour booked with a band in the States and have some new music that I feel good about. And for this great chapter with Lou to stop gnawing at me and get these songs shared, because he was inspired when he wrote them. It was really a touching long evening at his home and then those few hours on the phone. I hope there’s enough buzz and positivity around the record to enable us to get over to the UK as a full band and play later in the year. ROB HUGHES