Radio on - the dons of magisterial cool get up-close and personal... 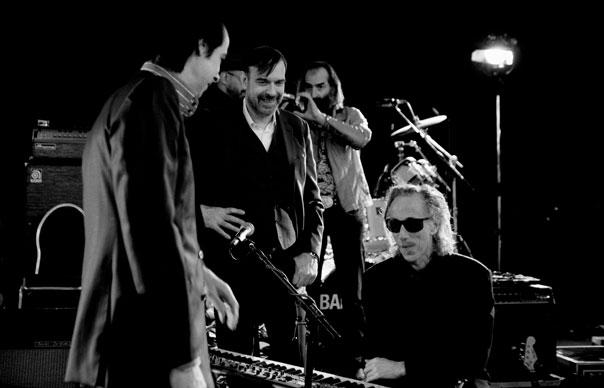 With a blunt honesty and disregard for the conventions of PR that’s perhaps typically Australian, Warren Ellis has admitted that what appealed to the Bad Seeds when the idea of playing a live set for LA radio station KCRW was first mooted was precisely nothing. “Actually,” he told Uncut, “we were all determined to not do it because the tour up to that point had been intense. But then we decided to do a couple of Grinderman shows at Coachella and figured anything was fair game.” Hence this set, recorded last April by Bob Clearmountain at Apogee Studio in Santa Monica.

The live album customarily struggles with an identity crisis. It’s often painfully obvious that it has no real purpose save to remind fans of an act’s existence in the gap between studio albums. It’s also hard to see the point of recording a show that has no emotional resonance for those who weren’t there, while those who were can presumably recall it at will. And although live sound quality hasn’t been an issue for decades, replicating the immediacy of the live experience always will be. Which is where the alluring warmth and peculiar, in-ear intimacy of the made-for-radio recording comes into its own.

Live From KCRW sees the Bad Seeds’ current lineup stripped down to its cornerstones of Nick Cave, Warren Ellis, Martyn Casey and Jim Sclavunos – plus former member Barry Adamson, who joined for the Push The Sky Away tour – and in rare close-up. The 10-song session (the limited vinyl release adds “Into My Arms” and “God Is In The House”) digs as far back into their catalogue as Your Funeral… My Trial, which is represented by the hypnotic and woozily mysterious “Stranger Than Kindness” and it features only four songs from their recent studio album. All have been either adapted to the environment or chosen because they suit it, although audience requests apparently played a small part. “Eventually,” deadpans Cave, as titles are shouted out by the small crowd of fans, “you’ll say one of the songs on this very short list here.”

They open with “Higgs Boson Blues”, a skewed and witty but affecting narrative with an existential core, its compelling slow burn rendered even more chimeric than usual, allowing surreal visions of Hannah Montana crying with dolphins and Cave in yellow patent leather shoes to swim in and out of focus. Piano, underplayed violin, gently lapping keys and the softest brushwork constitute the rueful “Far From Me”, from The Boatman’s Call and underline its debt to Jimmy Webb, while that album’s quietly philosophical, seldom-visited “People Ain’t No Good” also gets a showing.

What’s most apparent is the band’s mastery of mood and pacing. Of course, that’s central to the mix of shock and awe and exposed vulnerability that has always been the Bad Seeds live experience, but this intimate shared space makes any changes in a song’s treatment more dramatic and amplifies their emotional impact. Thus “The Mercy Seat” is minus its familiar declamatory fury, manic energy and accelerating sturm und drang – made over as a stately, piano-led funeral ballad, it’s somehow more in line with Johnny Cash’s minimalist cover. “Push The Sky Away” – in which Cave’s splendidly grazed baritone is offset by winnowing organ, electronics and the most sombre of beats – addresses both creative motivation and the dying of the light and is devastatingly poignant in its simplicity. When Ellis said of the session “it’s the most beautiful [I’ve] heard Nick sing outside of the recording environment”, he might well have had this song in mind. The quiet is finally upset by an almost comically raucous set-closer. “Hammer it, Jim”, Cave instructs Sclavunos and he does, counting into the cacophony and lurching near-chaos of “Jack The Ripper”.

If most live albums are dispensable, ending up as the lesser played records in a completist’s collection, then Live From KCRW is rare. More than standing as a document of a particular time and place, it makes not having been there feel like a real loss.
Sharon O’Connell

Q+A
Warren Ellis
What were the particularities of playing a live set for radio?
We wanted to strip the group down, make the versions leaner and quieter; the size of the room and format dictated this. Also, it made a break from the Push The Sky Away tour and the enormity of the show with strings and choirs. It was nice to get to the heart of the songs.

How did you fix on a setlist?
Some were obvious, as we were playing them in the live set and wanted a fair representation of the new album. Others we had played in a smaller format prior to this; it was very loose on the night. Some we dialled up on the spot as people requested them.

How did Bob Clearmountain end up on board?
It’s his studio, so I guess he does all the sessions for KCRW. We wanted it mastered in the States, so we asked Howie Weinberg to see it through – he’s the Joe Pesci of rock’n’roll.

“The Mercy Seat” is a strikingly less thunderous and urgent version. Did the room call for that?
It’s about the song, not the thunder. The environment called for all the songs to be treated that way – shorn of cacophony and theatrics.

KCRW’s website notes that you declined a request for the videoing of the performance. Why was that?
Cameras make you aware of where you are. Live recordings are historically problematic and it’s difficult to get the good stuff un-self-consciously. Video felt like a deal breaker and it’s nice to think that visually, this exists as a memory only.
INTERVIEW BY SHARON O’CONNELL