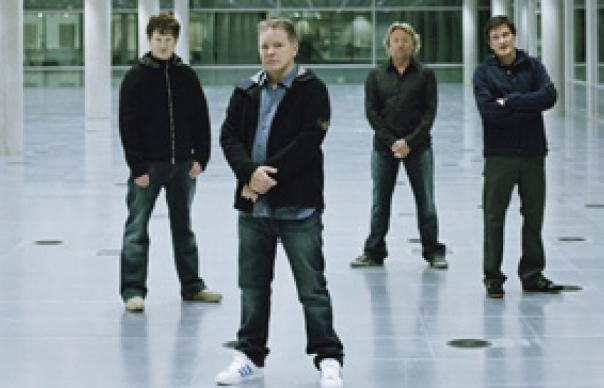 
There’s a film by mardy avant-garde writer BS Johnson called You’re Human Like The Rest Of Us, whose title expresses how many of us came to feel about New Order in the 1980s. And it’s something that these five gloriously different (and sparkily remastered) albums spell that out in frequently superb ways.

In 1981, New Order were making records that sounded like what they were in 1981, namely Joy Division with something important missing. Movement sounds better now than it did then, largely because then everyone was comparing it to Closer rather than what it actually was, which is an experiment in inventing the 1980s. “Dreams Never End” is still the best song, an almost panic-stricken Peter Hook writing his best pop song; but it’s the bonus disc (all these albums have brilliant bonus discs) that shows the way, most notably on “Everything’s Gone Green” and “Temptation”.

The early ‘80s were singles years for New Order, and Power Corruption & Lies is an odd mixture of confident pop and hesitant experiment. Again, the bonus disc shines (“Blue Monday”, “Thieves Like Us” and, musically, the last gasp of Joy Division, “Murder”). But then – Low-Life, the first New Order album that sounds like an album. Bernard Sumner’s most human lyrics (largely about his penis) gel with the pop axis of Gillian Gilbert and Stephen Morris – and Hooky’s bass, which is still, literally, breath-taking (seven and half minutes into the 12” of Perfect Kiss, something happens which makes your heart take off, and it’s Peter Hook doing it).

By the time of Brotherhood, there was an increased tension between the frequent beauty of the music and the band’s Northern self-consciousness (Hooky as bluff biker pirate, Bernard as occasionally coarse lyricist). You can hear it as far back as “Your Silent Face”’s “You’ve caught me at a bad time/So why don’t you piss off?” and you hear it once more in “Every Little Counts”’ “I think you are a pig/ You should be in a zoo” (and you can also almost hear Gillian Gilbert rolling her eyes at the same time). It’s a bit unfair to say you wouldn’t have got that sort of thing with Ian Curtis, but that’s the point, really. This was New Order becoming New Order and if anyone was entitled to not be Joy Division, they certainly were.

And around this time the bonus discs – normally with reissues a sort of cave where the mutant siblings and the ugly mistakes sit around with something horrible from a Kid Jensen session – really start to make sense. Because New Order, more than any other band, always maintained two parallel careers. There were the albums – gnomic, obscure, with difficult sleeves and song-titles that weren’t the choruses of the songs – and there were the singles. New Order were, amazingly, a dance act. The bonus tracks stopped being bracketed as “(From the soundtrack of the short film Belgian Doom)” and started being bracketed as “(Shep Pettibone Remix)”. You approached a New Order album with caution in case it bit you; you approached a New Order single with baggy shorts and excitement. All these albums range from good to great; but the singles – “Bizarre Love Triangle”. “Sub-Culture”, “Perfect Kiss” – range from marvellous to astonishing.

Then Technique came along and the two halves of New Order’s music joined up. Technique is first of all the most accessible New Order album; most of the songs sound stylistically similar to one another (with the exception of Fine Time, which seems to be from another disco altogether), it’s a poppy album (so much so that they were sued by, of all people, John Denver for tune theft), and Bernard Sumner had finally learned to sing. And best of all, what he’s singing is stuff about his life, rather than, say, pretend Ian Curtis lyrics or references to that mighty old pleasure zone of his. Technique is a powerfully contradictory album; not only is it an Ibiza record that’s New Order’s least techno-ey, but it’s a chirpy, upbeat album with mature lyrics inspired by the singer’s divorce.

After Technique, Factory Records ended, there were solo projects, and New Order returned with the one album of theirs I can hardly listen to, Republic (but which also contains one of their greatest singles, Regret). With these five very different albums, and a dozen or so great singles, from “Ceremony” to “World In Motion”, New Order had both invented and been invented by the 1980s. Best of all, during that time, they’d learned that yes, they were human like the rest of us.