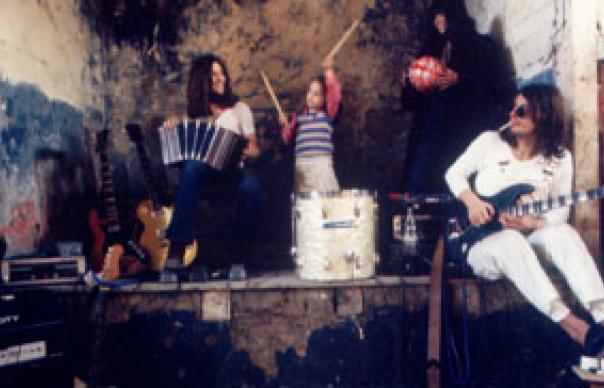 A café in north London, late 2000. For the first time in an age, Neu!’s three completed albums are to be reissued, and Michael Rother and Klaus Dinger have made a precarious truce to promote them.

In the preceding years, there have been endless squabbles preventing this extraordinary music from being restored to the public domain. Dinger, a notably wild-eyed man with the personal grooming of Catweazle and a picture of his girlfriend sellotaped to his shirt, has been releasing Neu! sessions on a Japanese label, Captain Trip.

Rother, a calm European technocrat dressed in black, has been pointedly unimpressed. As Neu!’s reputation and influence have increased, it seems the pair’s relationship has exponentially degenerated. “We’ve never been very close,” Dinger counters. “The only thing we’ve done is make music together, and in my opinion, it’s the only thing we can do. I mean, we would never go on holiday together.” For most of the interview, they have stiffly disagreed with each other’s interpretations of their shared history. This time, though, Rother’s silence implies total agreement.

Neu! are not, of course, rock’s only dysfunctional band. Nevertheless, the tension between the pair – birthed during their brief time in Kraftwerk in 1971, and persisting until Dinger’s death in 2008 – was always strikingly at odds with the harmonious music for which Neu! became renowned. This Neu! Vinyl Box – with a 1972 live session, a 1986 reunion attempt, a T-shirt and a stencil(!) thrown in – still begins with their first LP from 1972, and with “Hallogallo”. Clear-sighted, effortlessly propulsive, it feels like recording started in the middle of a telepathic jam that has already been running smoothly for hours, even days.

Neu!’s work is often simplified to this idea of ‘motorik’ – a term which Dinger characteristically disliked, preferring something with less mechanical implications like ‘Lange Gerade’ (‘Long Line’) or ‘Endlese Gerade’ (‘Endless Line’). Listening to their music in its entirety, however, gathered on Vinyl Box (with free downloads for all buyers, and not a vulgar old CD in sight), a more complicated picture of Neu! emerges. It might be the pristine motorik pulses that influenced generations of electronic auteurs, post-rockers, dronerockers and most every band who’ve looked for the next hip option after the Velvets. It might be Dinger’s clenched, glammy acceleration of motorik – on Neu! 2’s “Lila Engel” and “Super”, on Neu! ’75’s “Hero” and “After Eight” – that so invigorated John Lydon and the less cloistered punks.

But the corners of Neu!, Neu! 2 and the exceptional Neu! ’75 are sketchier, unfocused places. After the epiphany of “Hallogallo”, Neu! immediately slides into “Sonderangebot”, the amniotic squelching and scruffy dislocation setting a template for ambient diversions to come. That first LP was cut in four days, the third after an extended hiatus, reinforcing Dinger’s view of a duo clearly unenthusiastic about each other’s company. Neu! 2 was also finished in four nights, climaxing in a famously expedient rush, with two tracks being re-run at various speeds to pad out Side Two.

It’s this oddity which springs to mind when listening to the box’s Neu! ’86 album, a fraught reunion session previously – and controversially – released by Dinger as Neu! 4. Neu! ’86’s inclusion signposts a new phase in Rother’s relationship with his own legacy: his new live band (including Sonic Youth drummer Steve Shelley), specifically recruited to play Neu! music, confirms as much. Rother’s version is markedly different from Dinger’s Neu! 4, since he “completely reworked the LP from original multitrack and master tapes”, but fears that Rother’s politeness might take the edge off the sessions can be discounted.

Neu! ’86’s chief pleasure is in how it makes explicit their inchoate bickering, so that “Dänzing”, for example, slings raw guitar chords, bird noises, deranged sing-songs and elements of musique concrète into what is essentially ’80s electropop. Mostly, the album sounds like a messy argument about how Neu! should evolve and transcend their own stereotype. Sometimes, recidivism triumphs; “Crazy” is ostensibly a bubblegum punk retread of “Hero”. At others, the mischief-making can be rather forced; “La Bomba (Stop Apartheid World-Wide)” is basically “La Bamba” being grappled over by Stock, Aitken & Waterman and Throbbing Gristle.

It’s easy to see this ’86 session as despoiling the Neu! legacy. But Neu! Vinyl Box is both a tying up of loose ends, and a way of seeing the band’s music as haphazard, multi-faceted and innately impossible to tidy up. It concludes with the 18 minutes of Neu! ’72, a rehearsal tape similar to another clandestine Dinger release, Neu! ’72 Live In Dusseldorf, which reveals how they could be an exhilarating live band – and also how much Conny Plank, as producer, brought to their studio albums. At times, the groove sounds like it will roll on eternally. But then, again and again, the jam collapses in on itself; as fragile and capricious, perhaps, as the band who created it.
JOHN MULVEY