Gruff Rhys and Boom Bip go back to the future 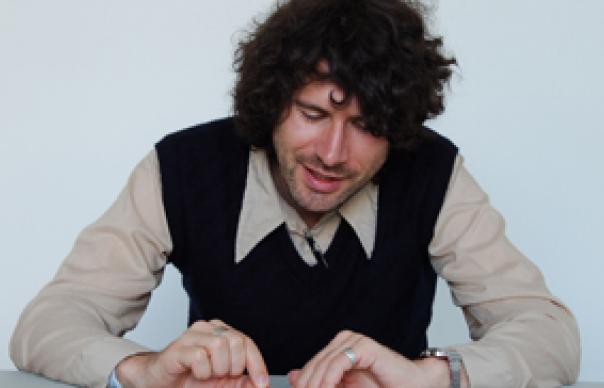 If anyone was going to make a concept album based on the life story of John Z DeLorean – the “playboy engineer” who invented the first muscle car, romanced Ursula Andress, hustled $97m out of the British government and was almost brought down by the FBI in a coke-smuggling scam – your money would be on Jay-Z. In fact, it’s an unlikely duo.

Super Furry Animals’ Gruff Rhys and Bryan ‘Boom Bip’ Hollon first collaborated on “Do’s & Don’ts”, a spectral sermon from the latter’s 2005 album Blue Eyed In The Red Room. As Neon Neon they have dumped the baggage of their regular guises, in the same way that Damon Albarn was able to emancipate his muse via Gorillaz. Here, with tinted aviators acting as a mask, Rhys and Hollon have mainlined the soundtrack of ’80s boomtime – yacht rock, Italo-disco, Prince – with their combined songwriting prowess preventing the affair from descending into pastiche.

Sunset drivetime anthems “Dream Cars” and “I Told Her On Alderaan” live the dream while acknowledging the fantasy. Vince Clarke in his prime would have been proud of “Raquel” (an ode to Ms Welsh, another DeLorean conquest) while the presence of rappers Spank Rock and Yo Majesty provides contemporary steel and sauce.

Throughout the album, it’s a thrill to hear Rhys’ mellifluous voice juxtaposed with the music’s synthetic thrust. It means there’s a soulful core to songs like “Belfast”, which recounts the episode when the wheels finally fell off the DeLorean bandwagon: he was forced to close his Irish car plant and flee from his celebrity creditors when the overpriced DMC-12 – the iconic gullwing-doored car that sent Marty McFly back to the future – failed to sell. As an exercise in sleek, nostalgic pop fantasy, Stainless Style is a lot of fun – and probably a cooler epitaph than a corporate conman like DeLorean really deserves.

UNCUT: How did the Neon Neon partnership come about?
RHYS: We’ve been touring and recording together occasionally for around six years. Early in 2006 Boom Bip contacted me about coming to LA to make a bonkers disco record. I was on the next flight.

What fascinated you about John DeLorean?
His life story was endlessly inspiring for songwriting: cars, girls and the pitfalls of celebrity culture and the American dream.

What does Neon Neon offer you that your regular recording guises don’t?
This record is a chance to make music outside our set ideas of taste. As the producer, Boom Bip put down ground rules from the start, that this record should be unconnected to any of our previous work. It’s definitely a party record, with elements of library music, lost 1980s power pop and Bret Easton Ellis.

Is the concept album largely a lost art?
It probably is – just as well we made a rock opera!