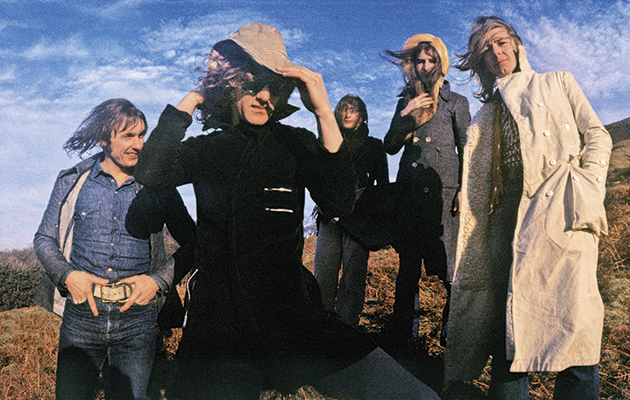 Mott The Hoople’s demented mentor, Guy Stevens, claimed that during a typically intense studio session he telepathically sent the lyrics to the anguished “When My Mind’s Gone” – from 1970’s Mad Shadows – to singer Ian Hunter, live in the studio. It is a possibility that the perma-shaded frontman could not entirely rule out as he listened back to the tape. “It didn’t sound like me, it hadn’t come from me,” he recalls in true believer Kris Needs’ sleevenote to this 6CD cornucopia of Mott’s early years. “It was totally Guy. It frightened me to death.”

Long before David Bowie took them to Top Of The Pops with “All The Young Dudes”, Mott knew how it felt to be a pawn in someone else’s musical game. Scenester, soul guru and president of the Chuck Berry Appreciation Society, Stevens had imagined a band that fused The Rolling Stones and electric Bob Dylan while serving time for cannabis possession in Wormwood Scrubs. On his release, the Island Records house crazy saddled Herefordshire wannabes Silence with 30-year-old ex-road digger Hunter as their new singer, and named the group of his dreams after a 1966 Willard Manus novel – “hoople” being US slang for “loser”.

If Stevens’ rock Frankenstein was not monstrously successful early on, Mott’s primal thud had significant echoes –  a dedicated fan as a teenager, The Clash’s Mick Jones said: “If it hadn’t been for Mott, there would be no us.” After Stevens just about produced the kaleidoscopic London Calling, Joe Strummer called him “the ultimate cure for musical constipation”.

Mott benefited from Stevens’ pop colonic in their early days, Hunter saying, “He’d get us drunk, we’d play a load of rubbish and he’d be going, ‘It’s great!’” That optimistic A&R technique led to the giddy mess that is 1969’s Mott The Hoople, Hunter’s Blonde On Blonde-ing on “Backsliding Fearlessly” and “Half Moon Bay” co-existing awkwardly with guitarist Mick Ralphs’ yen for bludgeoning rock.

Mad Shadows is more coherent, though Hunter’s marital problems and Stevens’ intensifying mania account for its OTT edge. Hunter’s wounded-bull bellow on “No Wheels To Ride” and the gospel-toned  “I Can Feel” express that torment, and even if Mad Shadows isn’t all anguish, there is darkness at its heart, Hunter channelling Stevens’ imploding ego on “When My Mind’s Gone”: “What once was clean is now unclean/What once was straight is now unstraight.”

It all proved too fraught. Stevens was benched for 1970’s countrified Wildlife, but maturity did not suit Mott: “We used to call it ‘Midlife’,” Ralphs joked. Hunter’s spindly “Angel Of Fifth Avenue” and the mournful “Waterlow” are Byrds-soft and Sandy Denny-spry, but Mott liked life wilder, recalling Stevens for 1971’s scattershot Brain Capers, touted rather hopefully here as proto-punk.

However, the “I don’t care what the people may say” refrain on New York Dolls-y opener “Death May Be Your Santa Claus” is more bruised bravado than year-one nihilism. “I feel neglected, feel rejected, living in the wrong time,” Hunter yowls on the moody “The Moon Upstairs”, though metaphysical centrepiece “The Journey” – The Band on Broadway – rises above the impotent fury, rebranding failure as life-enriching experience. It might have been Mott’s closing statement; the band resolved to call it quits during the subsequent tour, only for a sprinkle of Bowie stardust to change everything.

That, however, is another story. In  a revealing passage, Needs remembers encountering a morose Stevens ahead of an October 1972 gig by his newly successful former protégés: “The former human dynamo was now a slobbering drunk, that wild-eyed stare melted into red-eyed alcoholism as he seethed with acrimony, disgust and probably envy that Bowie had achieved everything he couldn’t.”

Heavy without being metal, lyrical with nary an acoustic guitar in sight, the Mott of Mental Train were a madman’s unworkable vision. Bowie’s Mainman team bashed them into a commercial shape Stevens never could, but the 1.0 Mott’s blundering, steamroller charm was their own. The producer died a drunk’s death, aged 38, in 1981. Hunter paid tribute with a dedication on his 1983 solo album, All Of The Good Ones Are Taken: “You gave your heart – you gave your soul. God bless you, Guy – rock’n’roll!” If that wasn’t the epitaph of his dreams, one can only hope Mental Train is.