MORGAN – A SUITABLE CASE FOR TREATMENT 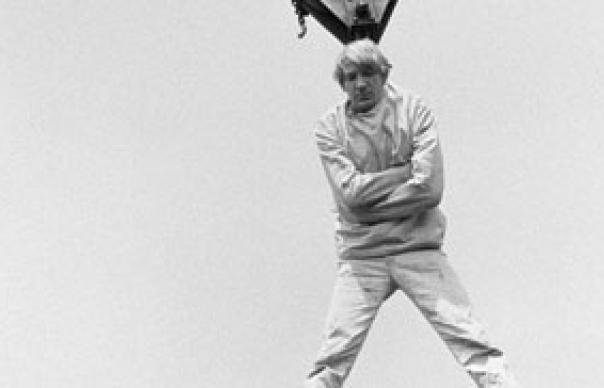 As the film opens, his wife Leonie (an impossibly foxy Vanessa Redgrave) is wrapping up divorce proceedings against him; while she’s in court, he’s infiltrating their house, uncovering his posters of Lenin and Trotsky, rearranging his stuffed monkey collection. Much of the film concerns Leonie’s repeated attempts to evict her bonkers soon-to-be ex-husband from her life. But that’s the trouble with Morgan – he just won’t let it lie. And the unpredictable adventures he can bring to the table are just too tempting to give him the boot entirely.

Morgan… is strangely off-genre, perhaps best described as a screwball tragedy. Shot in black and white, its paltry budget is often plainly visible in wobbly interiors and fragile furniture. But perhaps that was Karel Reisz’s (and writer David Mercer’s) point: the physical creakiness only adds to the sense of mental dilapidation suffered by the anti-hero.

Much extra weirdness comes from Reisz’s experimental additions to the script. The film is laced with intercut film samples: mostly stock wildlife footage (Morgan’s perception of society is one step above jungle law), also Tarzan and King Kong. The sense of how deeply Morgan draws sustenance from his over-active inner-life is convincingly achieved in these disjunctive moments.

But Reisz being Reisz, there is an allegorical dimension here, too. Upper class Leonie is perpetually seduced by Morgan’s radical chic (“You married me to achieve insecurity,” he tells her). Morgan is, after all, the child of leftie working-class parents so committed they visit Marx’s tomb every year on his birthday. Morgan’s refusal to leave Leonie and Charles alone is like a wake-up call to Swinging London; dialogue continually swerving from decadence to apocalypse, from sophistication to animalistic cravings. Morgan’s obsessive tampering with the marital home – at one point he wires the bedroom for sound and plays tapes of mating gorillas just when Leonie and Charles are about to get it on – can be seen as the itch for revolution lurking beneath outward prosperity.

The entire film feels volatile and unstable; it’s clunkily constructed with stills, sped-up and slow-motion sequences, giving the sense that at any moment the whole endeavour might cave in, the actors smile sheepishly at the camera and slope off home. But somehow, Warner’s manic performance keeps the whole thing rolling, and the absurdist finale, where he togs up as a gorilla to gatecrash Leonie’s wedding party, unfolds with a hideous logic, leading to a Docklands dream sequence in which friends, family and Russian revolutionaries condemn Morgan to a massed firing squad.

The whole cast is superb. As urbane art dealer Charles Napier, Stephens is cut-glass, hilariously disarming Morgan of his multiple weaponry. Irene Handl excels as Morgan’s Cockney Ma who “refuses to de-Stalinise”; Arthur Mullard deceptively tender as his wrestler stepfather. Bernard Bresslaw turns in a gumball cameo as a police officer. London itself, as so often in 1960s movies, looks nothing like itself; an amazingly quiet, traffic-calmed, leafy arena for the characters’ lives. Topped off with Johnny Dankworth’s grubby jazz score and a beautifully engineered final reveal, Morgan stands awkwardly but proudly as one of British cinema’s great, uncompromising achievements.
EXTRAS: None.
Rob Young
Rob Young